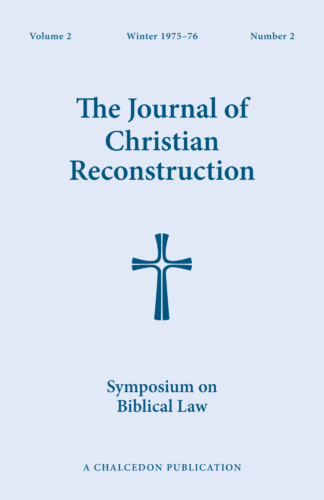 This ghastly but of theological nonsense indicates the nature of the crisis of our age. It is an era of disintegration, and the agencies that should be in the forefront of Christian reconstruction–seminaries, churches, colleges–have no idea that there is a need for reconstruction. If they did, they wouldn’t know where to begin. And if they knew where to begin, they would drive off the road within a mile. They have no roadmap, for the roadmap of reconstruction is provided by biblical law.

Biblical law is a topic which has not been discussed seriously in this century. Liberal theologians may study it in detail–often more carefully than the conservatives–only to conclude that these laws were simply late compilations of an oral tradition of an obscure Middle Eastern tribe. (Why a man would devote his life to a study of such documents is a mystery.) Conservative theologians have almost universally ignored the topic, dismissing it as not being germane to “the church’s dispensation,” or simply playing a conservative version of the antiquarian game–a game which liberals have mastered far better. An implicit antinomianism has engulfed the modern denominations, and it has led to the social impotence of the churches and the political impotence of Christians.

The result of this antinomianism has been a century of secular fads that have been baptized by the church’s intellectuals. The latest secular program (within liberal churches), or a decade-old failure (among the neo-evangelicals), is promoted by clerics and professors in name of “Christian relevance.” The church’s leaders occasionally take time off from mapping Sunday school bus strategies in order to march at the tail end of the cultural parade, banging a worn-out bass drum, hoping that their congregations will straggle along behind. But the congregations are seldom interested. The liberals are too busy golfing, the neo-evangelicals are too busy attending Wheaton College class reunions, and the fundamentalists are too busy attending prophecy conferences and gospel quartet festivals.

The requirements of the cultural mandate are rigorous (Gen. 1:28; 9:1-7). Consequently, contemporary Christians have done their best to deny the existence of that mandate. The subduing of the earth is either dismissed as not morally binding in this, “the church’s dispensation,” or else weakened by those who warn that its terms cannot be fulfilled within the limits of an internalized kingdom of psychological victory. The two necessary features of a successful program of Christian reconstruction are, first, eschatological optimism concerning the possibility of reconstruction, and second, a system of revealed law to serve as the intellectual took of reconstruction. Optimism provides the dynamic, and biblical law provides the guidelines.

Neither eschatological optimism nor a commitment to a case-law concept of Old Testament law is a part of the creeds or operating manuals of any Protestant denomination today. The denominations are therefore universally negligent concerning their duty to preach the whole counsel of God. Only the cults proclaim a somewhat relevant, though garbled, version of a developed kingdom of God. After all, the Mormons run the state of Utah. Could fundamentalists run Scranton?

The philosophy of law and the legal structure of built-in terms of the philosophy are at the very heart of a culture. The disintegration of law and law enforcement today is a worldwide phenomenon precisely because the prevailing religion of the modern world, humanism, is decaying. No legal system can survive without a strong religious foundation. The latest issue of The Journal of Reconstruction surveys both the collages and alternatives to this collapse. The only effective answer to something bad is something else which is superior.