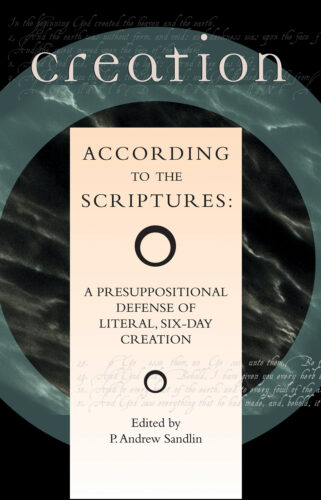 The debate over literal, six-day creation within the “conservative” camp is surely not a tempest in a teapot. While it is fair to acknowledge that sincere Christians appear on both sides of the debate, it is not correct to deduce from that literal, six-day creation is an issue on which there can be a reasonable, brotherly disagreement. Latitudinarians who point out that these has been no consensus on this issue in the orthodox Christian church should realize that there has been no consensus in the orthodox church on the doctrine of justification either, but that fact does not suggest we may hold a latitudinarian view of it. We unswerving advocates of literal, six-day creation are not contending that those who disagree with us are not Christians. We are, however, contending that they do not believe in a Christian manner on this issue.

Subtitled A Presuppositional Defense of Literal Six-Day Creation, this symposium by thirteen authors is a direct frontal assault on all latitudinarian and otherwise waffling views of Biblical Creation. It explodes the "Framework Hypothesis," so dear to the hearts of many respectability-hungry Calvinists, and it throws down the gauntlet to all who believe they can maintain a consistent view of Biblical infallibility while abandoning literal, six-day creation.

It is a must reading for all who are observing closely the gradual defection of many allegedly conservative churches and denominations, or who simply want a greater grasp of an orthodox, God-honoring view of the Bible.