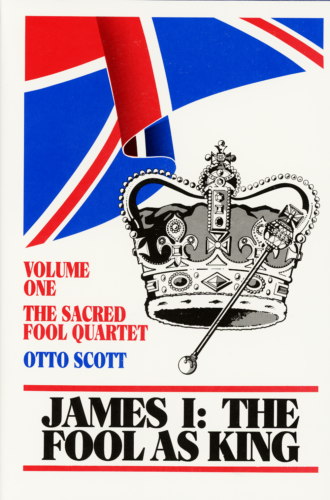 This is the first of four volumes on extraordinary fools whose follies influenced the course of all our lives. Without them, history would have been different, and our lives would today be lived along patterns beyond our powers to imagine.

James I and VI was a great fool. He threw away a tremendous inheritance and a superb opportunity for the basest of motives, while indulging himself in the comforts of the sewer. While bemusing his subjects with windy references to peace, he led them impotent disarmament before a crumbling Spain. Finally, he trained his doltish heir into a pattern of "kingly" behavior that provoked a civil war.

Beyond that, James was a fool in the Biblical sense, in believing that "there is no God." He called himself The Prince of Peace, and dreamed of sitting down with the Pope to rule the minds of all mankind. He spoke of his "Divine Right" in a transparent effort to ward away the fate of his mother, and finally, he sought the power of God over other men.