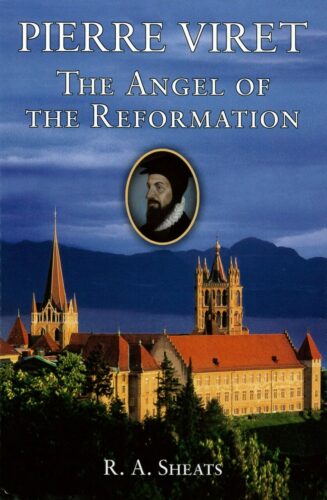 This publication marks the five-hundredth anniversary of the birth of Pierre Viret with the first full biography in English of this remarkable and oft-overlooked early Reformer. R. A. Sheats pens the fascinating history and life of this important early light of the Protestant Reformation who, after nearly five centuries of relative obscurity, is now enjoying a renewed interest in his history and scholarship. The republication of the life and works of Pierre Viret truly comes at its proper time, inspiring future generations to continue the work of advancing Christ's Kingdom throughout the world.

Pierre Viret, the son of a tailor, was born in the town of Orbe, eighteen miles north of Lausanne, Switzerland. Though raised in obscurity, he grew to become a crucial Reformed leader during the infancy of the Protestant Reformation in French Switzerland. Viret, together with his closest associates John Calvin and William Farel, formed the Swiss Triumvirate, the three leading Reformers in the French-speaking world. Known as the Angel of the Reformation because of his extraordinary Christian character and temperment, Viret was a model pastor during his ministry in Lausanne, Geneva, and France. Most of his ministry was served in Lausanne where he developed the Lausanne Academy. That institution would later relocate and become the Genevan Academy. After almost thirty years' ministry in Lausanne and Geneva, Viret spent his last ten years in fruitful ministry in France as the leader of the French Reformed Church. He theological output was immense, with over forty books to his credit. In his day he was a leading authority on political theory, applied Biblical Law, economics, and apologetics.

"This new biography of the great French Swiss Reformer Pierre Viret is a groundbreaking venture. Not only has R. A. Sheats given us the first full (and exhaustively illustrated!) biography of Viret in English, but has achived this feat with impeccable scholarship, making very generous use of the available sources. She has, in the manner of her great predecessor Merle d' Aubigne, entered into the very spirit of our Reformer, an achievement which she has rendered in a most engaging and attractive style."

"R. A. has written a superb biography on our Swiss Reformer that is both warmhearted and scholarly. We anticipate a soon translation into French."

Rebekah Sheats is the author of several historical works, including a biography of Pierre Viret, the Swiss Reformer, entitled Pierre Viret: The Angel of the Reformation. She is also engaged in translating Viret’s writings. Her latest work, Thou Shalt Not Kill: A Plea for Life, is a translation of Viret’s commentary on the sixth commandment.  Other translations include Letters of Comfort to the Persecuted Church, The Christian and the Magistrate: Roles, Responsibilities, and Jurisdictions, and Simple Exposition of the Christian Faith.

Rebekah is grateful for the godly home-education she received, and has designed several curricula to assist parents in the education of their children, including Biblical Greek and Biblical Hebrew for Children (Psalm 78 Ministries).

→ More by Rebecca A. Sheats