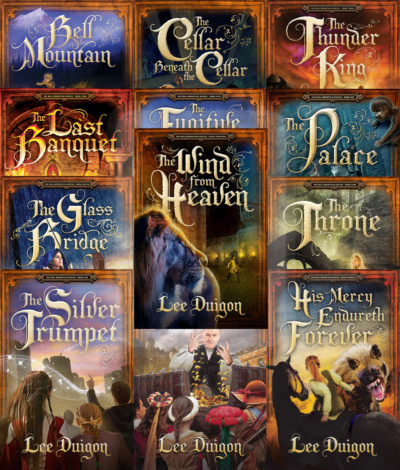 Finally... Faithful Fiction that Reveals the Kingdom of God!

The world is going to end as soon as Jack and Ellayne ring the bell on top of Bell Mountain. No one has ever climbed the mountain, and no one has ever seen the bell. But the children have a divine calling to carry out the mission, and it sweeps them into high adventure...

The Cellar Beneath the Cellar (#2)

A world's future lies buried in its distant past. Barbarian armies swarm across the mountains, driven by a terrifying vision of a merciless war god on earth. While a nation rallies its defenses, a boy and a girl must find the holy writings that have been concealed for 2,000 years; and the man who was sent to kill them must now protect them at all costs...

The tiny army of the Lord is on the march against the undefeated horde, in bold obedience to a divine command; but the boy king, Ryons, marches all alone across an empty land. The Lost Books of Scripture have been found, but they may be lost again before the human race can read them. And Jack and Ellayne have been captured by the Heathen...

In the wake of a barbarian invasion, chaos sweeps across Obann. The boy king and his faithful chiefs try to restore order before the Heathen come again - not knowing that this time, the Thunder King himself will lead his armies.

The Great Temple lies in ruins, but another Temple has arisen in the East. And the heroes of Bell Mountain, Jack, Ellayne, and Martis, captured by the Heathen Griffs, are to be brought before the Thunder King...

There is a new Thunger King in the East, and new threats against the West. The City of Obann seethes with treason and plots against King Ryons - and an ignorant slave boy must defend the rightful king's throne. And from the Lost Book of King Ozias emerges the first glimmer of God's promise of a Savior.

God's judgment hangs over the great city of Obann. In the Palace, power-hungry men enter into secret dealings with Obann's archenemy, the Thunder King.

Can faith do what pride and power can’t? In obedience to God, the boy king, Ryons, with only half his tiny army, crosses the mountains to invade the Thunder King’s domains.

King Ryons has led his tiny army into the heart of the Thunder King's dominion. Ahead lies the impregnable fortress of the enemy, defended by the destructive powers of the ancient world. The First Prester, Lord Orth, continues his missionary work among the Heathen: for God has commanded him to establish a new Temple, one not made with human hands. But in the great city of Obann, they reject Orth's vision and seek to rebuild the old Temple with tainted gold amassed for the Thunder King by crime and violence. In Ryons' absence, his enemies work to abolish his kingdom and restore the defeated Oligarchy. They now control a vast treasure in gold, to be used against the king, and no scruple hinders them. Can the boy king's few remaining loyalists stop them? Can they protect the kingdom until the king returns to claim it? That is, if the king returns at all: for the way to the Thunder King's fortress is perilous beyond measure.

The Thunder King has been destroyed—or has he actually reappeared in Obann’s greatest city, to claim it as his prey?

In city and in forest, the boy king’s loyal servants struggle to preserve his throne. But it will be a long journey home for King Ryons and his army, while ambitious and unfaithful men scheme to take away his kingdom.

Join the heroes of Bell Mountain as they fight for Ryon’s throne!

God’s judgment hangs over the city of Obann, still in the hands of usurpers. Can the city be called to repentance in time to save it from destruction? Lord Orth must return to the city to preach mercy and repentance, and Ellayne and Jack must get him there safely, past the tyrant’s men who’ve sworn to kill him.

*This series will contain more volumes which will be added and the price adjusted as they become available.