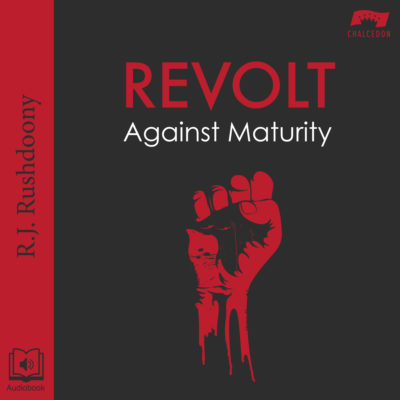 Revolt Against Maturity is a study of Biblical psychology. Biblical psychology contrasts sharply with a science of the mind based on the religious presuppositions of humanism, which regards man as having no constant nature. A science of the mind based on humanism views the mind as a clean slate, and man's nature as plastic to be molded by men and institutions in the image of man for the new order he will establish. The Biblical view sees Psychology as a branch of theology; theology is a study of all that the Scriptures declare about God. Theology is essential not only to the study of psychology, but to ethics, anthropology, soteriology, eschatology, etc. Biblical Psychology assumes that man is created in the image of God directly, and not indirectly through theistic- or any other kind of evolution. Being created directly by God, man is not in the process of defining or determining his ontological qualities. Man has already been determined and defined by God. Thus it is God who has established the limits and nature of the mind.

The mind of regenerate man experiences radically different motives and presuppositions from those of unregenerate man. The author sees the central task of Christian Psychology as that of discerning the mind and soul differences that exist between the regenerate and unregenerate. Pastoral counseling should first seek to establish whether or not a person is truly regenerate, and then aid the regenerate to further growth in sanctification.

Work was to have provided the joy of fulfillment in God's goal of maturity for man, but because of the curse man is often subject to the frustration of meaningless and degrading work. True work is the exercise of dominion over the creation under God. When man's work is separated from dominion of the created world, he is often subject to moral and religious paralysis and becomes a sick soul.

Man suffers similarly when he abstracts God from reality. Since God created everything, nothing can be interpreted apart from God. When man attempts this impossibility, he suffers psychologically. True knowledge of anything is revelational of God. Thus, an aspect of man's revolt against maturity and against life is his revolt against knowledge. Psychological damaging is inevitable for those in revolt against the maturity which the God of all life and all knowledge has purposed for man.

The certain and true guilt which the human personality suffers because of sin can be alleviated only when God effects regeneration through the atoning blood of Christ. Thus having laid aside the old self with its evil practices, the new self is being renewed to a true knowledge according to the image of the One who created him in righteousness and holiness of the truth. (Col. 3:10; Eph. 4:24) In the general or wider sense, the image of God in man means that man like God is a personality. The author notes that "in the redeemed man, this means that man becomes progressively more and more a person, self-conscious in his growth and character (as opposed to being unconscious of his nature), and steadily manifesting more and more the image of God in knowledge, righteousness, holiness, and dominion." Sanctification is unto holiness by which man realizes his chief end: to glorify God and enjoy Him forever: But because of his revolt against maturity man continues to suffer psychological damage both personally and collectively through the chaotic condition of his mind and his culture.