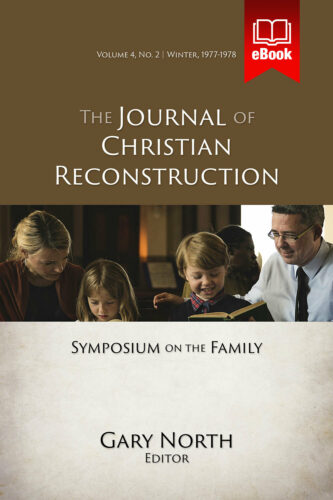 There is no institution more central to Christian reconstruction than the family. The family is the primary agent of welfare, education, and self-government. When this institution is under fire, as it is today, the very fabric of society is threatened.

Secular humanism is traditionally allied with those who would radicalize the Christian family. The war against family ties goes back to the French Revolution, or even earlier, to the revolutionary communes of late to Medieval Europe. Whenever the family is challenged, whether by anarchist or statists, the ultimate beneficiary is the civil government. The family is the most important buffer between the citizens and the power of the state. It is not surprising that revolutionaries, when they first capture the machinery of government, declare an all-out-war on the traditional monogamous family.

Monogamy is a primary source of social energy. This was understood by Freud, but also by J. D. Unwin, whose 1926 essay on monogamy is reprinted in the latest issue of The Journal of Christian Reconstruction. Abandon monogamy and within three generations you will experience lowered production in almost every field of human endeavor. This was Unwin’s conclusion, long ignored by secular humanist scholars. A parallel discovery has been made by George Gilder: the single male is perhaps the greatest source of social pathology in any society. When men remain single, they tend to drift into destructive lives. The breakdown of the monogamous family, and the rise of widespread divorce, have led to the proliferation of younger unmarried men. Crime has risen, suicide rates are up, and other undesirable results have come along with the disruption of monogamous marriage.

The family is supposed to be future-oriented. It is to be the creator and transmitter of capital, both physical and human. Yet, modern Socialism has struck directly at the heart of the family by increasing estate taxes to astronomical levels. We are witnessing the steady erosion of our future capital. The family’s role as trustee is being abandoned by secular culture.

When the family declines, the other institutions possessing power (or claiming legitimate power) replace the family. The state has become the self-appointed educator, welfare agency, and pseudo-parent to millions of Americans. It has attempted to swallow up the primary social functions of the family. We have voted enormous power into the hands of bureaucrats as we have simultaneously abandoned our personal responsibilities as family members. Then we wonder why the modern family is socially less important than in earlier decades, and why people no longer keep long-term commitments as family members.

The state is not the only agency which has sought a transfer of power from the family to itself. Modern churches have swallowed up some of the older functions of the family, even in the realm of worship. Protestant sacerdotalism has replaced the older Protestant theology of the priesthood of all believers. The family has seldom been granted the sovereignty it possessed in New Testament times and even in Old Testament times. The result has been less dynamic Protestantism, one which has not consistently followed its own theories of anti-sacerdotalism. The Protestant priest, while not invested with the power that the pre-1950 Roman Catholic priest once claimed, has nevertheless tried to imitate his Roman Catholic counterparts. This error, too, has come at the expense of family priority.

Now that the family and Western industrial culture has been stripped of so many of the responsibilities it once had, and the pseudo-families of church and state have proven so inept at handling the problems families once dealt with successfully, there is no institution which retains the confidence of a wide number of citizens. With a loss of faith in all contemporary institutions, the public has been unable to grapple successfully with basic social and economic problems. “Who is responsible?” is answered universally: “Someone else.” Where no one takes responsible action, the society drifts from one crisis to another. Meanwhile, taxes keep rising. The state can seldom solve problems, but it has no trouble in finding expensive new problems to solve, not to mention older ones that remain unsolved.

The disintegration of the Western family is apparent on both sides of the Iron Curtain. However, it is not universal. Here and there new interest in is being shown in reviving the older concept of the family as trustee. It does not show up in the statistical aggregates. It is still a cloud on the horizon, no bigger than a man’s hand. The sociologists have not recognized a possible shift, since the signs are few. But the success of such programs as Bill Gothard's “Basic Youth Conflicts” seminars indicates that Christian families are concerned about what they perceive as cultural disintegration. It indicates that people are willing to take steps to do something to reverse the drift into social chaos, at least within their own families.

There should be little doubt that since the members of the family have the most to lose from its demise, it is they who will have the greatest incentive to reverse the process. Thus, we should not expect leadership to come from other sources. If Christian reconstruction is to begin, it must begin within the institution which has the most influence over our day-to-day lives. That institution is the family. The modern churches are incapable of reforming themselves, let alone family life. The coming reconstruction must come from outside the bureaucratized institutions of our age. We cannot expect to receive leadership from those who have prospered within the framework of institutions that are in need of reform.

This issue of The Journal explores in depth the status of the family in America today. It offers reasons why the family is basic to society, and why society is doomed to impotence if the family is not restored to its Christian foundations. It offers suggestions of steps that families can take to reverse the processes of drift and decay that threaten them. A new vision of the family’s role in Christian reconstruction is presented. The family recommended by modern humanism is like boat halfway to the waterfall, and the rocks lie below. The issue of The Journal can serve as a paddle, or even an outboard motor, to turn the boat around.