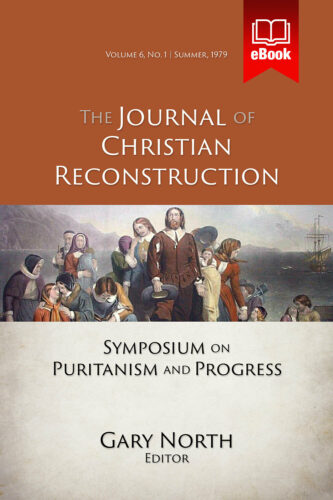 In the previous issue of The Journal, we presented the case for the puritans as reforms who were determined to reconstruct society in terms of Biblical law. Not every Puritan had this vision, of course; not every Puritan agreed about the nature of Biblical law. But sufficient numbers of them did share this vision, especially in New England, and the world still reaps the benefits of their efforts.

This is another way of saying that the Puritans expected success to come their way, and when it did, it left its mark on Western Civilization. By unleashing the talents of men in every station in life, the Puritan doctrine of the priesthood of all believers transformed the West. A grass-roots reconstruction began which was to lead eventually to the American War of Independence. The top-down hierarchy of Anglicanism did not take root in the Puritan colonies. Because of this, American political life was freed from the dead hand of a church-state bureaucratic tradition.

But it was not simply in the realm of politics that Puritanism left its mark. Consider modern science. Without the doctrines of Puritanism, it is unlikely that modern science ever would have appeared. The calling before God, the legitimacy of the mechanic's trade, the optimism concerning the study of nature, and many other Puritan concepts brought forth modern science. Two articles, one by Charles Dykes and the other by E. L. Hebden Taylor, demonstrate this forcefully. Christians seldom know what modern historians of science know, namely, that Puritanism was basic to the advent of modern scientific progress.

This ingrained optimism stemmed from their eschatological presuppositions, as James Payton demonstrates with respect to English Puritans and Aletha Joy Gilsdorf shows with respect to the first generation of colonial Puritans.

And then there was Oliver Cromwell. Judy Ishkanian provides us with a detailed biography of this crucially important military and political leader of the Puritan forces in England. Who was he, how did he accomplish his goals, and where did he get his vision? These questions are answered in considerable depth, given the limitations of a single chapter in biography.

This issue of The Journal is a continuation of an investigation into the nature of the Puritan reformation. It is followed by the third and final volume, "Puritanism and Society." Anyone who wants access to illuminating introductions to the impact of Puritanism outside of the institutional church as such, should have these volumes in his library. They will serve later Christian scholars as starting points for further research. Even more important, they open up a whole new world of Christian history and inspiration, for the Puritans vision-that all of the earth is open ground for the establishment of God's Kingdom-can be revived in our day. That vision can become a heritage for later generations. But to become a part of that heritage, men must reconsider the standard accounts of Puritanism's influence in the less informed (but widely read) secular textbooks.

For Christians who want to learn why and how Puritan theology led to Puritanism's reconstruction of seventeenth-century though and culture, these issues of The Journal are indispensable.