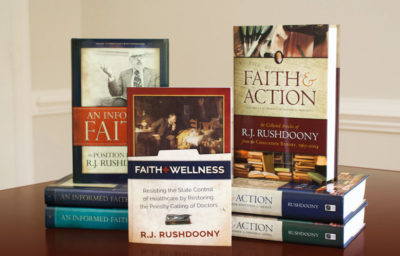 We are more than thrilled to finally offer the COMPLETE Legacy Publications Set. What is it? Well, since 1991 the only way to access Rushdoony’s essays and articles from the Chalcedon Report—as well as all his position papers and medical reports—was to have the massive volume Roots of Reconstruction.

However, Roots of Reconstruction had no indexes, so finding a particular topic, author, or scripture was very difficult. In addition, Rushdoony wrote so much more in between 1991 and 2001 that is not included in Roots of Reconstruction, so we wanted a complete collection of everything in more manageable volumes PLUS for these new books to have the MOST COMPREHENSIVE indexing system we’ve every produced!

Here’s what you get in the Legacy Collection:

An Informed Faith: The Position Papers of R. J. Rushdoony

Faith and Action: The Collected Articles of R. J. Rushdoony from the Chalcedon Report, 1965-2004

This three-volume collection of hardback books is the complete collection of the essays of R. J. Rushdoony written for the Chalcedon Report between 1965 and 2001 along with several transcripts of his recorded talks. The large volume Roots of Reconstruction only contained his Chalcedon Report essays up until 1985, so most of the essays included in Faith & Action were unavailable to readers for many years until now.

It also features an extensive 184 page indexing section which includes a General Index, History Index, Scripture Index, and Works Cited Index as well as a “Chalcedon Report Directory” which is a complete list of Rushdoony’s essays by number and date (he numbered his Chalcedon Report essays).

Faith + Wellness: Resisting the State Control of Healthcare by Restoring the Priestly Calling of Doctors

This paperback books includes all the Medical Reports once part of Roots of Reconstruction. We felt these medical reports deserved their own concise volume. It also features a General Index, History Index, Scripture Index, and Works Cited Index.