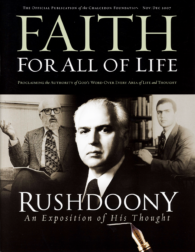 Preserving the Message of R. J. Rushdoony: The Most Important Work Chalcedon Can Do

At the passing, in February 2001, of Chalcedon’s founder and my father, R. J. Rushdoony, there was debate both within and without the foundation about the course that it should follow.

Dr. R. J. Rushdoony and the Chalcedon Foundation he launched in 1965 have continued to exert an influence on mathematicians and scientists. Rushdoony focused primarily on the philosophy of science, the intellectual underpinnings upon which the various modern thought edifices have been erected under the aegis of rationalistic humanism.

When we think of Dr. Rushdoony’s impact on Christian education, we might think first of his courtroom testimony on behalf of Christian schools and homeschools.

How Rushdoony’s Views on Economics Could Change the World

“We depersonalize the world; we find it easier to treat people impersonally. We speak of ‘labor’ problems and ‘management’ problems, when we should be talking about people created in God’s image. To do so, i.e., to see them as people, gives a religious dimension to the situation, not a scientific one. It requires us to view economics from a Biblical perspective, and to see all of life as God requires us to see it. We have devalued life and people, and we need again to see all things in terms of the Lord and His law-word.”

There is an exchange of dialogue from G. K. Chesterton’s Father Brown detective series that highlights the Rushdoony approach to faith and life. A doctor says to Father Brown, “I’m a practical man and I don’t bother much about religion and philosophy.” To which Father Brown immediately responds, “You’ll never be a practical man till you do.”

To a Thousand Generations: Rousas Rushdoony and the Study of History

In November 1969, distinguished Harvard professor George Williams wrote to his old friend Rousas Rushdoony...Williams and Rushdoony had a long history. They had known each other at Berkeley, while Rushdoony was a student and Williams a professor at a neighboring Unitarian seminary, and Rushdoony considered him an intellectual mentor.

​Postmillennialism. The eschatology that taught that the entire world would be converted to Christ prior to His return in glory and the ushering in of eternity. The view that treated the Great Commission as being greater than the span of man’s enfeebled imagination. The idea that Jesus Christ would one day literally be the Savior of the World (John 4:42) by having drawn all men unto Himself (John 12:32).