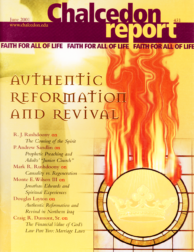 The Coming of the Spirit

In the Old Testament, it is God the Spirit Who is most present. It is He Who speaks through the prophets and holy men, and it is He Who is the comfort and strength of covenant men. The repentant David prayed, "Cast me not away from thy presence; and take not thy Holy Spirit from me" (Ps. 51:11). In spite of this, we can speak of the post-resurrection era as the time of the coming of the Holy Spirit.

Some have suggested that from time to time I include shorter editorial comments rather than the standard article-length editorial. The initial presentation of this arrangement appears below. Feel free to mail or e-mail your comments, suggestions, and criticisms.

It is difficult for the modern mind to accept the possibility of substantive revival and lasting reformation. Christians are not immune from the modern tendency to limit their thinking to strict causality, the idea that every effect has a specific cause.

Reformation and revival have not only been redefined or confined to the status of historical footnote, but in many cases relegated to the realm of the impossible. This is especially true when referring to what are commonly known as “unreached nations” or “closed countries” such as we find in the Islamic world. It does not even cross the mind of most pastors that a Muslim country might become “Christian” and radically transformed. They either do not believe it is their job to undertake this task in Muslim nations, or they simply do not believe it possible. They reason that to see true revival and reformation is difficult enough in a country like America which has strong democratic institutions, but is far more difficult where the entire society is built around an anti-Christ religion such as Islam. Couple this with the fact that Muslims tend to be rather violent when one tries to change their society, and you have an impossible situation — or so we are told.

Many people arrive at church as if they were about to embark on a sanitized and boring packaged tour of an ancient religious ritual. They behave as if the relevance of these rituals for today’s worshipers can be appreciated only by those who specialize in archeological digs through the musty liturgical practices of people who were best forgotten. An alien watching from above would have no idea that these Christians have any concept of stepping into the special presence of God Almighty: a God Whose majesty, glory, and power are so infinite in holiness and all perfection that, if He revealed too much of Himself to fragile humans, they would be reduced to drooling, vegetable-brained idiots.

Macroeconomics: The study of the overall aspects and workings of a national economy, such as income, output, and the interrelationship among diverse economic sectors.

The One, the Many, and the Mythology of Science

The objective of the present article is to compare the worldviews of ancient mythology and modern science in order to show the deep mythological structure of the latter.

The Sovereignty of God

Although most Christians today would acknowledge (though some would do so only grudgingly) the sovereignty of God, few have a solid grasp of the meaning of it. This is not surprising, given the woeful state of theological knowledge in the church, which, in turn, is due to the absence of theological study and reflection in the church.