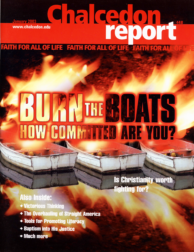 Burn the Boats: How Committed Are You?
January 2003
Save Issue Download Issue (PDF)

Baptism into His Justice

Then will I sprinkle clean water upon you, and ye shall be clean: from all your filthiness, and from all your idols, will I cleanse you. 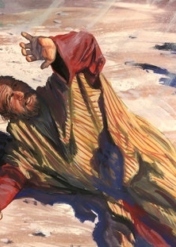 God has not given us repeated pictures of His total victory so that we can be gloomy pessimists about the cause of the gospel. Rather, we are called to serve the victorious Christ and to see Him as the eternal Victor whether we by faith see that future victory or any personal victories in this life.

Once, men looked up to Christians because they wielded wisdom, understanding, and accomplishment. With their Christ-centered foundation, they spoke with meaning and relevance to a dying world.

Everything in the work of redemption is personal, individual, and prepared for each person. Everything has its own address and name and title. It is not a retail store where things are sold and, therefore, everyone can take according to his own choosing. It is a palace where gifts are distributed and the gift is designated, therefore, for each one for whom it is intended. (Abraham Kuyper, Particular Grace, 87.)

Maybe it's time we, too, burned our boats and settled down for the spiritual battle that manifests itself in the physical world, remembering, that with God on our side, eventual victory is certain.

"Resolutions" and The Overhauling of Straight America 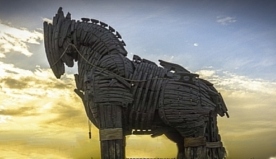 For Christians, I think it should be clear whose agenda has been moving forward in America when school officials focus on bullying being immoral but the sin of homosexuality is "an acceptable alternative lifestyle."

America's Central Banks (Part 1): An Evaluation of How They and The Federal Reserve Bank Have Performed

In order to evaluate the actual performance of the Federal Reserve Bank, we must understand its context.

​Biographers and scholars have characterized Christopher Marlowe, the great Elizabethan poet and playwright, as an atheist and blasphemer. But it is hard to believe that the man who wrote Doctor Faustus was an atheist. In fact, there is nothing in all of Marlowe’s writings in which he professed to be an atheist. The accusation is based on hearsay, reports of conversations, and the belief that he belonged to Sir Walter Ralegh’s famous intellectual circle known as the School of Night.

"Leave Longview, Texas, Friday, August 2 @ 10:30 AM on Amtrak's Texas Eagle...." So began my diary entry at the start of my railroad journey to California to speak at the Third Annual Student West Coast Worldview Conference (August 5-10, 2002).

"Do you think that history is objective?" A colleague recently asked me that question, referring to an old debate among historians. It is an important question for our postmodern age, and one that touches both on the nature of history and the nature of truth.