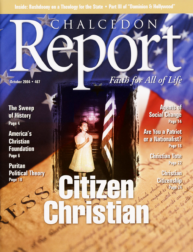 The Need for a Theology of the State

Evolutionary thought has accustomed us to think of polytheism, the belief in many gods or forces, as a mark of primitive cultures emerging out of animism. Polytheism is ostensibly succeeded by monotheism, and monotheism by science and reason. This construction is not historical; it is, moreover, philosophical and mythological.

The Sweep of History

In colonial America the church was the hub of community and social life. It was frequently a center for news regarding community, colonial, and international affairs. Not surprisingly, the signals across Boston Harbor to warn patriots of the approach of the British originated from the Old North Church.

One day, a group of Pharisees and Herodians came to Jesus with a question: “Is it lawful to give tribute unto Caesar, or not?”

Puritanism was a reform-minded Calvinistic movement in the British Isles in the late 16th and early 17th centuries. Some historians dislike the term, arguing that it is too broad and the movement too difficult to define. It is clear, however, that a vigorous Reformed movement emerged during the era of Elizabeth I (1588–1603) and had an enormous impact on England, Scotland, Ireland, and America.

My favorite anecdote about citizenship concerns a confederate soldier brought before General Benjamin Butler at the end of the Civil War. “We gave you hell at Chickamauga, General!” said the soldier.

In the Great Commission of Matthew 28:18–20 (“teach all nations…”), Christ calls Christians to be agents of social change in non-Christian cultures.

Why Is Isaiah's Message to Israel's Civil Rulers Applicable to Us Today, Since We Do Not Live in a Theocracy?

Are You a Patriot or a Nationalist?

If we are honest and thoughtful, we will find that certain ideas we hold dear, and believe to be good and right, may be more the product of our culture than of a Christian worldview. Patriotism is one of them. Can we make our patriotism captive to the obedience of Christ?

When I speak of my Nation, I mean the Commonwealth of Virginia. — John Randolph

What is the Christian take on movies? Can Hollywood be a part of Christian culture? And what about those “Christian movies”? Movie screenwriter Brian Godawa answers these questions.

Ask the average American pastor if you can have ten minutes out of the Sunday morning service to encourage the members to participate in the upcoming election, and he will probably look at you like you just spontaneously grew a third ear in the middle of your forehead.

Christian Citizenship: A Gift from God

Imagine a Roman Empire, in the 1st century, in which the public officials — from the emperor on down to the local tax collector — are elected by universal suffrage. Even the slaves vote.

Christian Metaphysics and the Creator-Creature Distinction: Part I

God is the basis for all that exists, all that we are, and all that we know — according to Christian metaphysics.