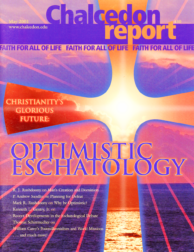 What was God's purpose in creating man? 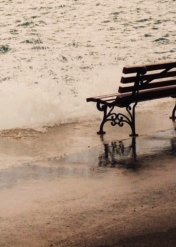 Why do Christians tend to be so pessimistic? They tend to see only what they see with their eyes. This is rationalism, but Scripture tells us to see in terms of what we believe. Scripture calls this walking by faith. We serve a mighty God. How mighty is our faith in Him?

The eschatology of the pessimists truly is a self-fulfilling prophecy: God has predestined the increasing defeat and irrelevance of His kingdom. His church, and His gospel; therefore, we must create a version of Christianity that conforms to our (lack of) expectations; and, sure enough, as a result of dedication to a theology of irrelevance and impotence, the kingdom, church, and gospel become increasingly irrelevant and impotent.

Recent Developments in the Eschatological Debate

Eschatology is so often abused today that it has become a source of positive embarrassment to the integrity of the Christian Faith and Biblical Christianity.

William Carey is considered the Father of Protestant missions.1 His book, An Enquiry into the Obligations of Christians to Use Means for the Conversion of the Heathens,2 was written in 1792, the beginning of the so-called Great Century3 (1792-1914) between the French and the Russian Revolutions.

Strangely enough, however, little attention has been paid in his numerous biographies to his theology, as expressed in his major work. (The only exception I know of is Iain Murray’s study, The Puritan Hope.) This failure is probably due to the fact that Carey’s theology differs from that of the presently predominant, post-classical mission societies, which happily claim him as their father, although he was a Calvinist and a postmillennialist.

The judgment-scene Christ presents in Matthew 25:31-46 best fits a postmillennial view of eschatology. I mean this in two senses, with especial emphasis upon the second sense that will be explained below.

But there is an even more important issue. The pretribulation rapture scenario, as well as the larger dispensational premillennialism upon which it is founded, is simply not true. It is based on poor, sloppy Biblical scholarship, and is usually accepted by people who have simply had it passed on to them as though it were the only interpretation of prophecy.

The Financial Value of God's Law, Part One: Property Laws

In the midst of what many call a "post-modern" crisis in which we're told that there is no objective truth and everyone is free to make up his own "reality," the goodness, grace, mercy, and power of God and His eternal law become ever more conspicuous and irrefutable.