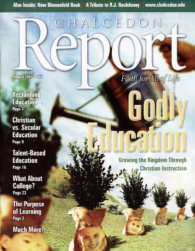 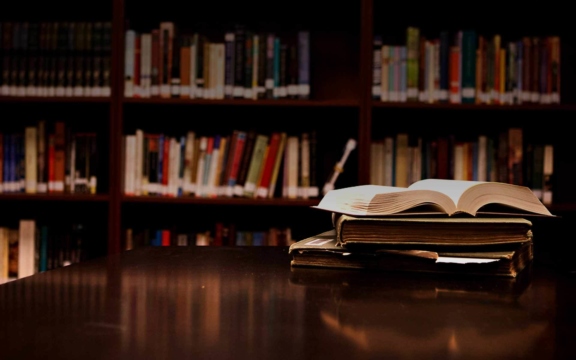 The Purpose of Learning

It is a deadly error on the part of the Christian school to assume that its task is similar to that of the "public" or government schools with the Bible added to it. There are no common sets of facts that are shared by both Christians and non-Christians. If we simply reproduce the same facts, we reproduce the same religion of humanism as that of the state schools.

My father, R.J. Rushdoony, frequently noted that culture was religion externalized; it was the outworking of religious faith. In terms of this we can also note that education is training in terms of a culture's religious faith.

A Tribute To Dr. R. J. Rushdoony For His Contributions To Christian Education

When I first met Dr. Rousas John Rushdoony, I was in awe of his great wealth of knowledge and wisdom, and the way he articulated both in such a non-condescending way.

Rousas John Rushdoony is widely known as a writer and theologian, not as a gladiator. Yet a gladiator he was, and his arena was the courtroom in a multitude of lawsuits in many states.

During the colonial era of the 1700s, the most important battleground in America was in our churches. It was from the pulpits of Christian churches that faithful preachers of the gospel of Christ sought to ignite the glorious flame of God-given freedom and self-responsibility in the hearts and minds of Americans.

Government Schools: Producing What We Pay For!

There is hardly a political discussion these days that does not in some way involve education. Most surveys show that voters are concerned about giving America's children a good education, and today's educational-industrial complex insists that money should be no object.

The Christian One-room Schoolhouse: A Superior Alternative to Government Schools

Peter Drucker, in his 1989 book, The New Realities, highlighted what he saw to be the major cultural shifts in the 20th century. The farming sector, once the largest sector of every economy, had shrunk to a mere few percent of the population, yet the general wealth of the farming sector had not deteriorated. Together with the broad population, farmers were better off.

A Biblical Approach to Student Evaluation and Grading

In a society with a now largely effaced Christian heritage, virtually every area of human activity requires rethinking to establish a sound Biblical view. Student evaluation and grading is not the least element of education requiring a theological treatment.

"What Does It Mean to You?" History as a Tool of Covenant Evangelism

Rousas and Dorothy Rushdoony shared a Sunday dinner at our home in the fall of 1994. Some other families joined us, and there were many children present. Offering thanks for the meal, Rushdoony prayed for the children in a way that I will never forget: "May these children and their children's children be Christians until the end of time!

As Christians in an increasingly complex world, we recognize the crucial role that higher education plays in preparing us for our calling in God's plan of dominion. For most people, higher education necessarily means at least a four-year degree from an accredited college.

If You Only Had a Few Years

The war is over, and they have won. This is the background for James Clavell's short masterpiece, The Children's Story. The story is set in a second grade classroom somewhere in America. It begins at two minutes to nine as the children discover they have a new teacher.

By Sandra A. Lovelace

It's not unusual to look for positive feedback when we're involved in a consuming commitment. Rewards along the way can confirm that we are headed in the right direction. 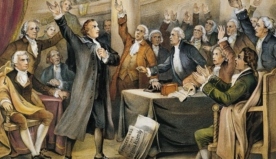 Patrick Henry loved freedom. He loved the church. And he loved Christ. The education that his father and mother provided him at home laid a firm foundation and one that Henry would endeavor to pass on to others.

The Islamization of Europe

Oriana Fallaci, the intrepid Italian journalist, known for her no-holds-barred interviews of world leaders and celebrities, has written a book that the Moslems in Europe have tried to ban.