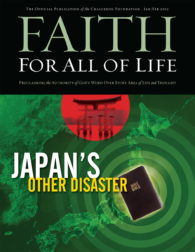 The Witness of the False Prophet

In analyzing the work of the false prophet (Deut. 18:9-22), we saw that the purpose of the magic, sacrifice, divination, and related rites of false prophecy is prediction. The prediction involved in the rites described (Deut. 18:9-14) has as its basic premise the belief that real and ultimate power resides elsewhere than in God. The practice of false prophecy could involve child sacrifice, divination, astrology, enchantment, witchcraft, charms, spiritualism, wizardry, necromancy, and the like. It could also involve simply the belief that Satan is the ultimate power.

Our Actions Reveal Our Faith

Protestantism has a self-imposed limitation on its ability to advance the Kingdom of God; it has no theology of Kingdom work. Its marching orders tend to be a personal and subjective reading of Scripture-"the leading of the Spirit." Such objective rules are often man-made pietistic directives yet imposed as moral absolutes. Under the shadow of these catastrophes, an undercurrent of apathy and powerlessness dominates every sphere of Japanese society-and the Christian churches are not exempt from it. They've been irrelevant to Japanese society for a long time. Due to their liberalism, dispensationalism, antinomianism, anomianism, and humanism, churches in Japan are dwindling.

In continuing our discussion of changing the typical paradigm whereby many of our brothers and sisters approach Christianity as though it were a “Library Science,” studying Scripture with the primary purpose of simply adding to their knowledge about God, we will focus on the importance of viewing Christianity as a “Life Science” whereby we study God’s Word in order to be more consistent servants in Christ’s Kingdom.

Why Check-Book Theology is Necessary—Part 3, We’re All Entrepreneurs Now

Look around many cities in the USA, as in Europe, and you find empty churches, or churches that have been taken over by businesses or by non-Christian faiths. Dying churches, allegedly, are a sign of our age and coming catastrophe: inevitable, or at least, beyond our ability to reverse the trend.