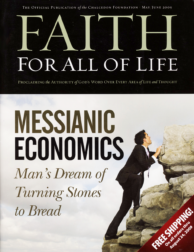 Tithing and the Kingdom

The waving was a forward and return motion representing the offering of the breast to God and His handing it back to the priest for his portion. The symbolism is clear from Nu. 8:10–22. The Levites were offered by the congregation as a wave offering to the Lord who gave them back to Aaron (v. 19) to assist him in his ministrations. There was a difference between the wave breast and the heave thigh: the breast was given to God who handed it back to His priest; the thigh was given directly to the priest. So the priest was the guest of God in the former case and the guest of the sacrificer in the latter, and thus became the mediator between God and man in the common meal.

“When economics becomes a branch of politics, it ceases to be economics and becomes messianic. It becomes an instrument of power whereby men play god and plan to use human beings as their raw material.” ~ R. J. Rushdoony

The Mountains of Prey

There are actually three things that are certain in this world: death, taxes, and cover stories in the pre-Easter and pre-Christmas issues of Newsweek and/or TIME that slam orthodox conservative Christianity. Despite the controversial cover text (“The Decline and Fall of Christian America”), the April 13, 2009, issue of Newsweek is actually worth a second look, primarily because writer Jon Meacham was able to catch Dr. R. Albert Mohler, Jr., wringing his hands in lamentation over the latest religious demographics.

How well are the nation’s biggest ministries and pro-family organizations doing at encouraging Christian parents to get their children a Christian education?

Once Upon a Time: Challenging the Status Quo

Once upon a time, there were children who were eager to learn to read. They wanted as much help as possible to be able to read wonderful books like the Bible.

Rich Toward God: Kingdom-Centered Living in a Collapsing World

Is God’s Word concerned with sound money by itself? Ethics without an end in mind is not Biblical religion. There is no point in discussing debt avoidance, sound money, and other “Biblical” economic principles if adhering to those principles leads to something greater than the mammon they represent.

Those who yearn for our Sovereign God to be glorified in the nations have long prayed for a change of order—a change from a smothering brand of humanistic statism as was adopted by Israel when she petulantly demanded a king (1 Sam. 8:5–7).