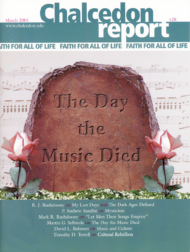 I am now 84 years of age, feeling somewhat venerable and dignified with my white hair and beard. 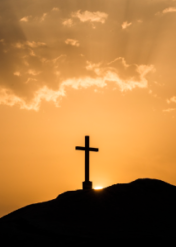 Perhaps you want to live in a Dark Age; you find God's law distasteful, and want Jesus Christ as your Savior, not your Lord. If so, be content with the world around you. But, if not, believe in and apply God's law.

The heresy of mysticism, heavily indebted to the ancient pagan Greek philosopher Plato, emerged near the end of the patristic era, and it has been a recurrent plague ever since.

I was pleased recently when I learned that the favorite hymn of the late Dr. Greg Bahnsen was "Joy to the World" by Isaac Watts.We must never relegate music to anything less than a central part of life and worship. The Scriptures repeatedly tell us that we are to sing unto the Lord.

"The Day the Music Died"

Back then, I documented the extent to which humanism dominated music, contra James Jordan's opposing viewpoint that music had emerged relatively unscathed by humanist influence in comparison to the other arts. Now, standing on the edge of the new millennium, one can survey how completely the intervening fifteen years of humanist domination has altered the landscape. The easy part is compiling the evidence; the hard part is wresting control from the kingdom of man.

The Biblical View of Music, Part II: Some Errors Considered

In a previous article, "The Biblical View Of Music," I discussed the key Biblical requirements for good music. Art, by its very nature, is enjoyed by being reflected upon.

Music and Impacting Culture for Christ

For those of us who support the creed and basic manifesto of Chalcedon, seeing Christendom impact all of culture should be the driving force in our lives.

Cultural Rebellion Against God: Risk, Knowledge, and Regulation (Part I)

Though Christians are quick to profess God's omniscience, we are slow to recognize the enormous consequences of this attribute. God has never learned anything.

The Knowledge of Yahweh: The Prize of Information Warfare

An awesome aspect of the powerfully redemptive ministry of Jesus Christ was His binding of Satan (Rev. 20:1-3) from his deceiving, or leading astray, the nations during His continuing reign.