In the last issue of Faith for All of Life we featured an article by Pastor Shawn Mathis concerning the application of Malachi 4:6 to the homeschooling movement (particularly the American version). This article has ignited significant controversy among Chalcedon’s readers, which is a fairly rare occurrence.

Readers who contacted us on-line were trending positively toward the article, about 70 percent positive to 30 percent negative. But readers who took the time to handwrite or type their letters, putting their correspondence in stamped envelopes and mailing them, were solidly opposed to the article 100 percent.

No writers directly engaged the author’s exposition of the Malachi passage (though some said they doubted it was correct). The bulk of the concern over the article was the perception that Mathis was criticizing homeschooling per se, or maligning good men of God.

The most serious form the latter took: charging Mathis with a personal animus against other leaders (e.g., Rev. Kevin Swanson) with an eye to furthering his own fiefdom. Whatever case could be made for any recent breach between these men (and an inquiry made last week to a former clerk of session discounted even this), the fact remains that the article was written several years ago, and only just recently was published by Chalcedon. After doing additional due diligence, we believe this kind of charge can safely be laid to rest: the chronology witnesses against it.

​ Faithful Wounds of a Friend, or Dangerous Error?

Some wondered why Chalcedon wasn’t publishing articles opposing public education. We surely have a strong pedigree here, being the Christian publisher that printed Bruce Shortt’s valuable book The Harsh Truth About Public Schools when other publishers passed on it. I even belabored our emphasis in the extensive Editor’s Introduction that prefaced the article by Mathis (who himself homeschools and has been a sympathetic internal observer of the homeschool movement for nearly two decades).  The short answer is, we don’t expect public schools to promote the correct meaning of Malachi 4:6. We continue to labor to see every family give their children an uncompromisingly Christian education, ending state-run education by way of attrition. And we get there by being faithful to Scripture.

Yet some astute observers (whom we deeply respect) have wondered if the political left, whose efforts are ramping up of late, wouldn’t seize upon some of Mathis’s comments and use them to skewer homeschooling. In other words, has Chalcedon handed its enemies a sword? This issue comes to a head in reference to Mathis’s citation of the PEERS Biblical worldview testing developed by the Nehemiah Institute. The interpretation of that data, both thematically and statistically, would be the point at issue. 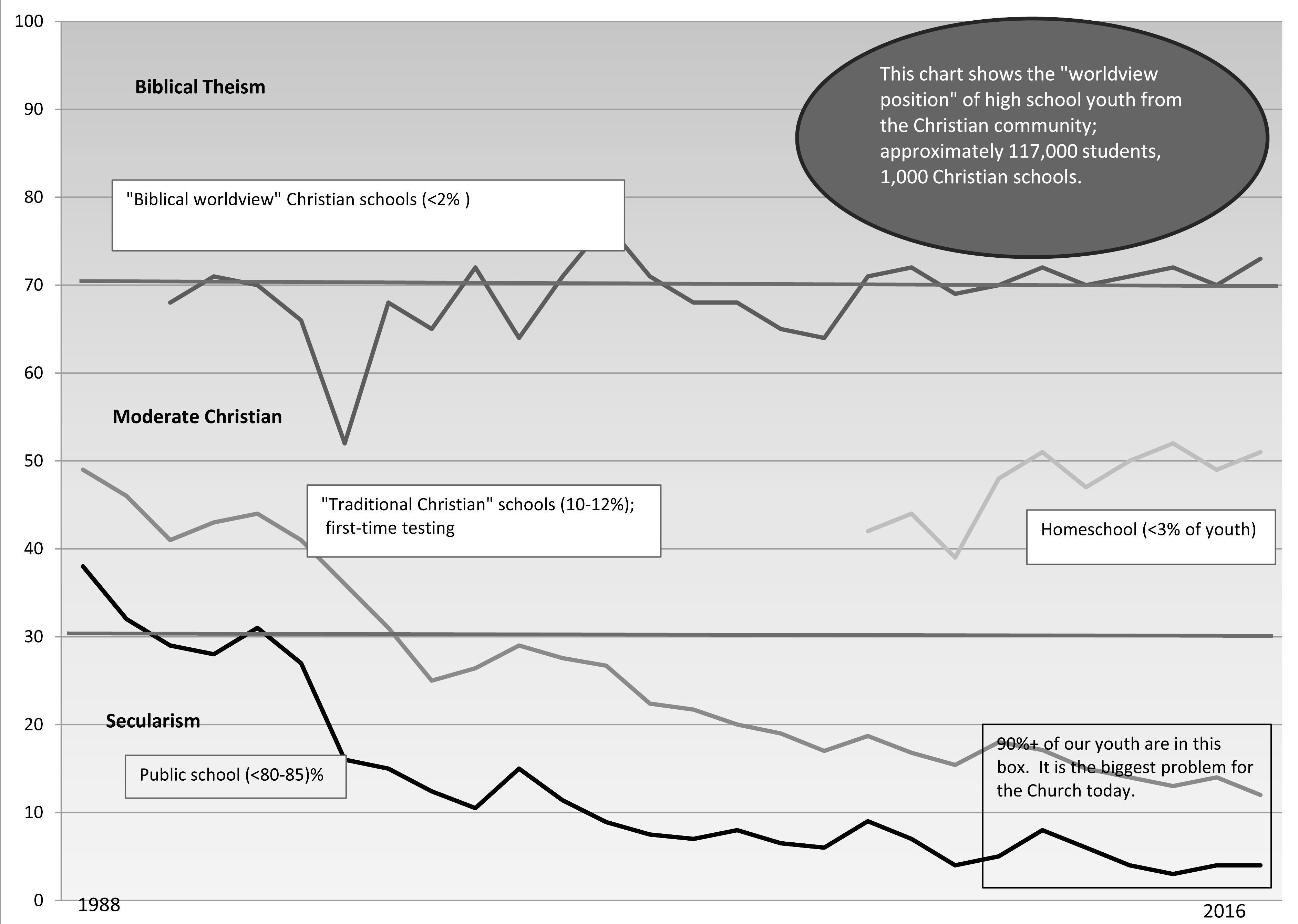 With permission of The Nehemiah Institute, www.nehemiahinstitute.com

I consulted with Dan Smithwick, founder of the Nehemiah Institute, who was quite familiar with the Mathis article we published. Were his test results misused or mishandled by Mathis in any way? The answer is no. So far as the article was concerned, Smithwick generally agreed with Mathis’s use of his data.

But there is more to the story in respect to the lesson to be gleaned from the chart. Smithwick construes it in a positive way: since their first appearance on the graph, homeschooled children have improved more than any other group measured. When he comments on this chart in the lectures he gives around the country, he exhorts homeschoolers to persevere and to take heart in what they’ve achieved. They’re on the right track.

“People homeschool for so many different reasons,” Smithwick told me. “This is a factor in the graphed results. Also, to my surprise, we don’t get much opportunity to test homeschoolers, but that looks to be changing. I’ve been asked to lecture at a major homeschooling event in the Pacific Northwest, where three thousand homeschooling families are expected.”

Smithwick believes that by focusing on the homeschooling data, we’re missing the most important aspect of his chart: the box at the lower right showing where the vast majority of children from Christian homes fall. The two descending graph lines representing those young people show a long-term free fall. “If these trends continue for another thirty years, do you know where that will put us?” he asked me. “It’ll put us in Europe!” Meaning that at this rate, American church membership will drop to European levels of well under 5 percent of the population.

By contrast, the homeschoolers and children in “Biblical worldview” day schools are heading in the right direction. In fact, Smithwick sees the Nehemiah Institute chart (reproduced by permission) as an exhortation to homeschoolers, not a criticism.

Beyond the thematic question is the statistical import of the chart, for the simple fact that it is not weighted by group size. If you adjust for that (e.g., determine the z-score under the bell curve), the homeschool statistics appear in a more positive light. Dan Smithwick summarizes the situation:

I don’t view the homeschool PEERS results as “sub-par,” as Mr. Mathis stated in the article. On a percentile chart, PEERS results of homeschoolers would rank 94+, close to the Biblical worldview Christians schools (as we have labeled them).

Yes, there is room for improvement, but the trend line for homeschoolers is the best of the four groups.

Our real focus should be on the two groups that fall in the Spiritual Drought box on the chart. These results are killing the Republic. Homeschoolers, on the contrary, have been and will continue to be among the best for the hope of the future of our land.

We should consider Smithwick’s interpretation of the test results as fairly authoritative.

Nonetheless, I have extended an open invitation to a noted defender of homeschooling, one intimately familiar with the statistical aspects in particular, to contribute to Faith for All of Life as his schedule permits. If there is more light to be shed on this issue, we proactively welcome it. This is the essence of good faith in respect to disputed matters.

And for the record: Mathis was not promoting public education against homeschooling, as is obvious from the very fact that he cites the PEERS tests at all. My Introduction also pressed the same point as Dr. Rushdoony did: homeschools and Christian schools should not be hostile to one another.

One common thread winding through the received correspondence was that Mathis was exhibiting a church-centered focus on revival, and was discounting the growing move toward God evidenced in the homeschooling movement—more specifically, that a family-centered revival was underway.

Certainly, when I’ve been asked whether there are any positive trends whatsoever in American society, I point exclusively to the homeschooling movement. I do this for the exact reason specified in my introduction to Mathis’s article: it is an example of Christian self-government, where the family is directly reducing the state’s oppressive footprint one child at a time. Children, the heritage of the Lord, are being seen as such by parents, and treated as such, in the face of considerable opposition.

We’re hamstrung by the many different definitions and connotations of the term, revival. If it means too many things, it will eventually mean nothing (and some observers were less than impressed with some historic revivals enumerated as such by Mathis). In any case, Mathis was attempting to bring order to the semantic fog by pinning down the term’s meaning. We draw attention to one part of his assessment:

The powerful preaching of the gospel, a renewed interest in God’s law, widespread repentance, many conversions to Christ—these are strict and proper signs of revival.

On the face of it, this definition of revival would seem to preclude associating the term with the homeschooling movement.

If we look at the situation from another angle, we notice something significant. If parents are turning from public schools to homeschooling, is this not itself evidence of widespread repentance? Is such widespread repentance, involving considerable sacrifice and labor on the part of parents, sufficient in itself to be considered a revival, a revival within the body of Christ? It is listed by Pastor Mathis as a strict and proper sign of revival. Even if Mathis intends it more narrowly as “repentance from dead works” to serve the living God, it still has more than a residual reflection when parents pull their children out of public schools to raise them in the Faith.

The PEERS results show that children are much better off being homeschooled than placed in “traditional Christian” schools, whose PEERS results have been cratering into the spiritual drought zone since 1988. (The Nehemiah Institute’s test exposes all such baptized humanism for what it is.)  Homeschooled children outnumber those in Biblical worldview schools, and though the rate of growth of homeschooling has slowed since the auspicious 1980s, the momentum is undeniable. As a useful index of the spiritual health of a church, few are as informative as a church’s attitude toward public schools, Christian schools, and homeschooling.

If terms like revival or awakening don’t adequately characterize the phenomenon of homeschooling—a slow motion explosion that continues to terrify statists and public school apologists—we may have to create a new term to meet the need. Educationally speaking, parents are no longer providing serpents and stones when their children ask them for fish and bread. Like Ezekiel’s valley of bones stirring to life, there is something afoot: a departure from Babylon, one to be rejoiced over.

Book
Philosophy of the Christian Curriculum, The
Book
Foundations of Christian Scholarship, The