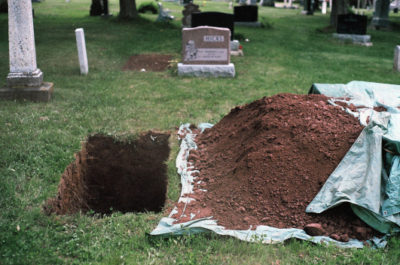 It is the mark of the unregenerate man to see death as a problem. For him, death represents the meaninglessness of life. For Christians, death means that God is on His throne.

When God created Adam and Eve, they were sinless. They had but one avenue of rebellion, one route that was not of obedience and blessing but death. This was the way they chose.

Not only was man attempting to “be as gods” in his rebellion, he would have been willing to live forever in this sin. Thus, in an act of mercy, God cast man out of the Garden and barred him from eating of the Tree of Life. Not only was temporal life in Eden barred to him, but eternal life in sin as well. Man is still content to live in sin, to rebel yet demand blessings. When man complains about tragedy, death, or sorrow, he often asks “Why?” “Why must we suffer?” “Why can’t we still have the good life?” Man still tends to want paradise, to enjoy some version of Eden or utopia.

Death was an academic topic before Genesis 3:5; it was not until the curse that it became real. God’s judgment was to make death real to men, to make it part of their consciousness. The only way man can truly accept death is to accept the justice it represents, to see it as a consequence of God’s curse on our sin. To dream of conquering death is a refusal to acknowledge the moral cause and meaning of death. It is a desire to reenter Eden and partake of the Tree of Life in defiance of God.

It is not wrong to fear death as a process; it is, after all, itself a judgment to which we are liable, not a challenge. God does not ask us to enjoy judgment. Death is a reminder of the reality of sin, that we answer to God.

Death is most horrid for the unbeliever. It is a contradiction for those still claiming autonomy from God. The sinner still wants to be his own God, but he knows he will die. He knows, deep down, it is a pathetic god who is so short-lived.

Death is an ugly imposition on the sinner’s attempt to play God. He knows his time is short, so even his life and time itself become his enemies. Those in rebellion against their own mortality view “father time” as carrying a scythe and death in the visage of a “grim reaper.”

For man in fear of death, time and aging are problems because they seem to work against him and draw him ever closer to an end that seems to defeat his only hope — life in sin. Those who fear the passage of time often fight against it or waste it in an attempt to squeeze as many experiences out of it as possible.

The redeemed need not fear death because they do not see it as an end. Freed from the burden of sin and guilt, they can see the future victory that the Resurrection of the dead promises. To the redeemed man, sin, not death, is his problem, and he believes it was solved in the atonement of Jesus Christ. Death then, will be but “[t]he last enemy that shall be destroyed” (1 Cor. 15:26). Death is thus the prelude to the ultimate victory of Jesus Christ.

The sinner who refuses to see sin as his problem knows only the inevitability of death and the ceaseless loss of his remaining time. In fleeing from the resolution of death, he flees headlong into death. The lifestyles of those who most vigorously reject God witness to this suicidal flight into death.

Paul tells us that in the Resurrection, death itself will be swallowed up in the victory of which Christ’s Resurrection was the firstfruits (1 Cor. 15:20, 54). Because even our physical death will, as the last enemy, be undone, Paul concluded by speaking of work and time as things of meaning and purpose. He declared that our labors are not in vain because we work for the God who gives us victory through our Lord Jesus Christ (vv. 57–58).

Death represents a sadness and painful parting from this life. We need not relish or hasten its coming, but we must see it as the stage for the ultimate victory of Jesus Christ in us. As He has put spiritual life in our cold, dead hearts, He shall one day put physical life into our cold, dead bodies. We can accept death because we believe in the Resurrection of the dead.