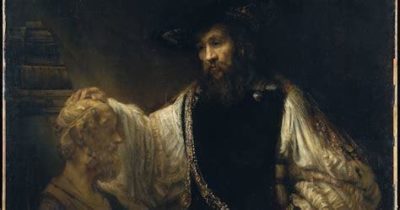 I began studies in statist education which led to the publication of Intellectual Schizophrenia (1959) and The Messianic Character of American Education (1963). The latter work was done on a research grant. Today, a grant for such a work would be unlikely as too controversial. At the time, statist education seemed to have triumphed, and more than a few persons felt that I was wasting my time trying to bring about a separation of schools and state. The Messianic Character of American Education was not reviewed by any periodical, but some state boards of education asked for a report on it! Now, with the dramatic growth of Christian and homeschools, statist establishment of schools is seriously questioned.

It is important to raise a more basic question: Why did the state get into education?

The origins of the concept of state control of education have pagan roots, and they are best set forth by Aristotle and his Politics. For Aristotle, the state “is the highest (good) of all, and . . . embraces all the rest” (bk. I, 1). He sees man as simply “the best of animals” and “a political animal” (bk. I, 2; bk. III, 6; etc.). Moreover, “the citizen should be moulded to suit the form of government under which he lives.” Furthermore, “Neither must we suppose that any one of the citizens belongs to himself, for they all belong to the state, and are each of them a part of the state” (bk. VIII, 1). Education for Aristotle must be regulated by the state, and for him this was beyond question (bk. VIII, 2). This should not surprise us. All non-Biblical cultures of antiquity were radically totalitarian.

In his Nicomachean Ethics, Aristotle simply intensified his position. In Book VIII, he discusses sex as a biological phenomenon which is no more a matter for moralization than hunger or thirst. Attempts to Christianize Aristotle’s thinking are futile. For him, “God” was an idea, not a reality, a philosophical limiting concept to avoid the idea of an infinite regress by positing a first cause and a beginning.

In the Bible, priest and prophet were outside state control. St. Paul saw himself as an ambassador for Christ (2 Cor. 5:20); he did not ask men to pray to the king, as the person or agency of God, but to pray for the king, that he conform himself to God (1 Tim. 2:1–2). The church, as the embassy of Christ the King was beyond state control. The roots of the medieval and modern church/state conflict are in this Biblical premise. The world of Aristotle and Plato is an alien, totalitarian realm.

We have thus two radically different doctrines of man: each is the antithesis of the other. For the Christian, man is a creative being made in the image of God (Gen. 1:26–28); for Aristotle, man is at best a political animal. For the Christian, salvation is only possible by Christ’s atonement. For Aristotle, salvation is statist to the core and is by means of education. For the Christian, education cannot be salvific or messianic, because only Christ can regenerate and save man. In the tradition of Aristotle, the state by education can remake man. These two views are mutually exclusive, and it is only man’s propensity to avoid conflict that leads him to attempt the reconciliation of Aristotle and Jesus Christ!

This reconciliation is what all who place their children in state schools are attempting to do. This syncretistic effort has led to the steady retreat of the church and to its adoption of alien “gospels” such as humanism. All efforts to merge the two plans of salvation are doomed to fail because God is God, and His truth is unchanging and unchangeable. At issue is more than a matter of forms of schooling. Rather, it is the basic question: Who is man’s savior, Christ or the state?