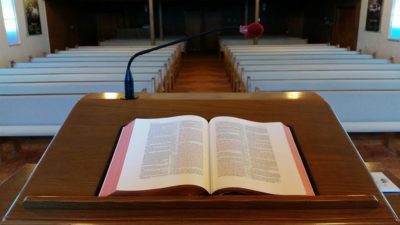 What we have seen in U.S. politics is a departure from Christian American constitutionalism. In a very important speech, delivered on March 2, 1930, a prominent American declared that the Constitution gave the federal government no right to interfere in the conduct of public utilities, of banks, of insurance, of business, of agriculture, of educa­tion, of social welfare and of a dozen other important features. In these, Washington must not be encouraged to interfere.

He went on to condemn the idea that “master minds” or a brain trust could be trusted with the powers of decision or regulation:

The doctrine of regulation and legislation by “master minds” in whose judg­ment and will all the people may gladly and quietly acquiesce, has been too glaringly apparent at Washington during these past years. Were it possible to find “master minds” so unselfish, so willing to decide unhesitatingly against their own personal interests or private prejudices, men almost godlike in their ability to hold the scales of Justice with an even hand, such a government might be to the interest of the country, but there are none such in our politi­cal horizon, and we cannot expect a complete reversal of all the teachings of history. Now to bring about government by oligarchy masquerading as democracy, it is fundamentally essential that practically all authority and control be centralized in our National Government. The individual sover­eignty of our States must first be destroyed, except in mere minor matters of legislation. We are safe from the danger of any such departure from the principles on which this country was founded just so long as the individual home rule of the States is scrupulously preserved and fought for whenever it seems in danger.

The governor went on to cite the limited “powers delegated to the United States by the Constitution.” They are, briefly, 1) the military power for the purposes of defense, 2) the treaty-making power, “and the sole right of intercourse with foreign States,” 3) the issue of money and its protection from counterfeiting, regulation of weights and measures, foreign commerce, protection of patents and copyrights, post offices, and minor federal tribunals in the states, and 4) the power to collect taxes, duties, and imposts, and to pay the debts for the common defense and general welfare of the United States. The governor added,

On such a small foundation have we erected the whole enormous fabric of Federal Government which costs us $3,500,000,000 every year, and if we do not hold this steady process of building commissions and regulatory bod­ies and special legislation like huge inverted pyramids over every one of the simple Constitutional provisions, we shall soon be spending many billions of dollars more.

What was absolutely necessary, the governor declared, was a return to basic principles:

But what are the underlying principles on which this Government is founded? There is, first and foremost, the new thought that every citizen is entitled to live his own life in his own way as long as his conduct does not injure any of his fellow men.

Who was this speaker? It was Governor Franklin Delano Roosevelt of New York, criticizing the leftward drift of the Hoover administration!

Let us glance briefly at another speech, delivered in Austin, Texas, on May 22, 1948, by Lyndon B. Johnson:

The civil rights program, about which you have heard so much, is a farce and a sham . . . an effort to set up a police state in the guise of liberty. I am opposed to that program. I fought it in the Congress. It is the province of the state to run its own elections.

Both men were right the first time. They sinned with knowledge and against knowledge. And this is not surprising. When men are without Christian character, they will choose the way of power rather than of truth and integrity. Where there is a moral disintegration, there is no assurance that an elected candidate will maintain a professed position. The number of elected conservatives who have switched sides is legion; they crumbled under pressure and under the temptations of power. There is thus little assurance that an election will gain any results, if there is no assured faith and character in the elected man. And politics cannot produce character: Christianity must. The decline of faith is a decline of character, and a decline of character is the forerunner of political de­cay and collapse. Christianity has an obligation to train a people in the fundamentals of God’s grace and law, and to make them active and able champions of true political liberty and order.

In 1776, in a letter to John Scollay, Samuel Adams wrote, “I have long been convinced that our Enemies have made it an Object, to eradicate from the Minds of the People in general a Sense of true Religion and Virtue, in hopes thereby the more easily to carry their Point of enslav­ing them.” How much more true this is now of every subversive agency, and how tragic and desperately wicked that the churches are themselves a major force in working for this eradication of faith and character. And this eradication is basic to man’s enslavement.

Am I advocating political preaching by the clergy, and is not this posi­tion too close to the social-gospel attitude of political involvement? The answer on both counts is no.

Two similar questions have been received: What is the relation of cler­gy and politics? Should men in the pulpit speak out on social and political questions, and, if so, under what circumstances? Answer: The clergy can­not faithfully expound the Word of God without dealing with virtually every social and political question. The Bible speaks not only about salva­tion but about God’s law with respect to the state, money, land, natural resources, just weights and measures, criminal law, and a variety of other subjects. The clergy are not to intermeddle in politics, but they must pro­claim the Word of God. There is a difference: political intermeddling is a concern over partisan issues: preaching should be concerned with Biblical doctrines irrespective of persons and parties.

Too many clergymen are operating with a “shorter Bible,” one limited to a fairly few passages and pages. One class of “shorter Bible” preachers are the modernists, who refuse to believe most of the Bible and limit them­selves mainly to a few chapters, such as those that talk about love. The other class of “shorter Bible” preachers claim to believe all the Bible, but they drop almost everything except passages dealing with the saving of souls. These men are too spiritually minded to be of much earthly good.

The excuse of this second group, who are pietists, is that the law has been done away with by grace, and so there is no reason to preach the law of God. This is false doctrine. The law is done away with only as an indictment against us; it stands as the righteousness of God which we must uphold. Every aspect of the Old Testament law still stands, except those aspects of the ceremonial and priestly law specifically fulfilled by the coming of Christ, and those laws specifically reinterpreted in the New Testament. We are saved from the law as an indictment but not to break the law freely. Is the law done away with and the Christian “free” to kill, commit adultery, or steal? Rather the Christian is saved to be able to live in and under God’s law, and the law now is written on the tables of his heart.

We are used to talking about the apostasy of the modernist clergy. Equally serious, if not more so, is the apostasy of the clergy who claim to believe the Bible but surrender the world to the devil, who refuse to proclaim the whole counsel of God to man.

The Bible is totally relevant to our world, and it must be so preached. Men are not given grace to despise the law but to enable them to keep the law. We have a lawless land because we have lawless preachers. The Bible speaks plainly in many passages on debt, theft (by individuals or by the state), justice, and other matters. Is it not a contempt of God’s Word to neglect these passages? Salvation must be the starting point of all preach­ing, but, if our preaching be limited to this only, we are doing two things. First, we are, like the modernists, tossing out more of the Bible. Second, we are limiting God’s Word only to what concerns our own souls, a very humanistic emphasis.

An interesting aspect of colonial Puritan preaching was the election sermon, sermons on fundamental moral issues preached before every election to instruct people in the Biblical mandate. Modernistic social gospel preaching is relevant to our world, but it is anti-Biblical in its per­spective. What we need is relevant Biblical preaching of the whole Bible, not only on doctrines or social issues of interest to us, but on all that the Bible teaches.