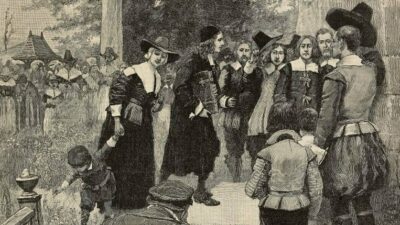 Capitalization is the product of work and thrift, the accumulation of wealth and the wise use of accumulated wealth.

This accumulated wealth is invested, in effect, in progress, because it is made available for the development of natural resources and the marketing of goods and produce.

The thrift which leads to the savings or accumulation of wealth to capitalization is a product of character (Prov. 6:6–15).

Capitalization is a product in every era of the Puritan disposition, of the willingness to forego present pleasures to accumulate some wealth for future purposes (Prov. 14:23). Without character, there is no capitalization but rather decapitalization, the steady depletion of wealth.

As a result, capitalism is supremely a product of Christianity, and, in particular, of Puritanism which, more than any other faith, has furthered capitalization.

This means that, before decapitalization, either in the form of socialism or inflation, can occur, there must be a breakdown of faith and character. Before the United States began its course of socialism and inflation, it had abandoned its historic Christian position. The people had come to see more advantage in wasting capital than in accumulating it, in enjoying superficial pleasures than living in terms of the lasting pleasures of the family, faith, and character.

How are we to defend ourselves? And how can we have a return to capitalism? Capitalism can only revive if capitalization revives, and capitalization depends, in its best and clearest form, on that character produced by Biblical Christianity.

This is written by one who believes intensely in orthodox Christianity and in our historic Christian American liberties and heritage. It is my purpose to promote that basic capitalization of society, out of which all else flows, spiritual capital. With the spiritual capital of a God-centered and Biblical faith, we can never become spiritually and materially bankrupt (Prov. 10:16).

* Originally a brochure produced for Coast Federal Savings in the late 1960s, this article was published with Rushdoony’s other brochures as part of a two-sided paper titled “Comments in Brief” with Chalcedon Report No. 225, April 1984.