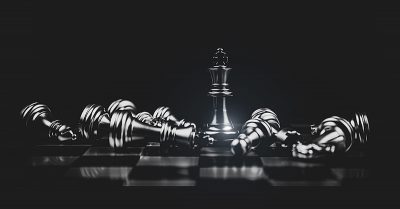 For well over 500 years now, Western civilization has been in a state of civil war, with two aspects thereof in a growing conflict with one another. These two contending forces are humanism and Christianity. Humanism began its rise to power in the medieval era, and its strength was such that it captured the church, much of the academic world, and the state as well. The so-called Renaissance was the victory celebration of the triumphant humanists. While preserving the form of Christendom and the church, the humanists put them to other uses. Lorenzo Valla openly turned to anti-Christian standards as the new yardstick, without bothering to deal with the Bible as a serious source of law. The source of all virtuous action, Lorenzo Valla held, is man’s natural bent to pleasure. Ficino held that virtue and love were responses to beauty. However much these and other men disagreed as to the true standards for life, they were agreed that God could not be the source of standards, but that man and man’s reason is the yardstick in terms of which all things must be judged. The standard, it was held, is man, and the moment. Ficino’s inscription in the Florentine Academy concluded thus: “Flee excesses, flee business, and rejoice in the present.” For these men, the church was to be the instrument for a new kind of salvation, a refined Christianity informed and remade by humanism. As Cronin has pointed out, Botticelli’s painting of the Birth of Venus was an expression of this faith: the symbolism of Venus in this portrayal means that “[n]atural love, purified, is about to become Christian love, eros to become agape” (Vincent Cronin, The Florentine Renaissance [New York, NY: Dutton, 1967], p. 211).

The unnatural union between Biblical faith and humanism was shattered by the Reformation. In the regrouping of forces which followed, it gradually became clear that, more basic than the division between Protestant and Catholic, was the division between Christendom and humanism. Both branches of the church were quickly infiltrated by humanism, and, with the French and Russian revolutions, two things became clear. First, the old attempts at synthesis and union had been discarded. Humanism was now strong enough to stand on its own, to judge and condemn Biblical religion. Second, it was also clear that, however much the façade of synthesis has since been offered to Christendom, the real issue is a war to death. In the Marxist world, the persecution of Christians (and orthodox Jews) has not diminished with the years. A very considerable number of the people in the slave labor camps are there for religious reasons, and their persecution is savage and intense. The triumph of statist humanism has been very nearly complete, in that virtually every state in the world is either dominated by or under the influence of this alien faith.

At the same time, however, the growing bankruptcy and imminent collapse of humanism has been increasingly in evidence. By replacing God with man as the new ultimate and absolute, humanism has introduced moral anarchy into the world. If every man is his own god and law, then no order is rationally possible. Humanism, having deified rationality, must now use the irrational and coercive power of the socialist state to hold society together.

Moreover, having denied that there is any truth beyond man, humanism has surrendered the world outside of man to total irrationality. There is no meaning, purpose, or truth in the world: it is held to be mindless, meaningless, brute factuality. But man, once seen as the principle of reason in the universe, has, since Freud, been seen as himself irrational and meaningless, so that man no longer can find truth or meaning anywhere. The world and man are essentially pointless and meaningless. The fact that church, school, and state have all been captured by this bankrupt humanism makes the crisis all the greater.

The bankruptcy of humanism makes all the more urgent a return to a consistent and thorough commitment to Biblical faith, to Biblical law, and to a Biblically governed world and life view. It means, too, that the opportunity for the resurgence of such a faith has never been greater. As the crisis of the twentieth century deepens, the opportunity will become more and more obvious. Men will not long cling to a humanism which cannot provide them with anything to satisfy either their mind or body. One man, speaking of modern humanistic politics, once told me, “Sure, the system is rotten and senseless, but it still gives me a good living.” There are millions like him, feeding on the relics of humanistic civilization. Every day, however, the emptiness of humanism becomes more apparent; its money is progressively bankrupt, its politics corruption, and its education mindlessness. As a result, since nothing has any meaning, bad taste, vulgarity, profanity, and insanity are enthroned as “art” to express total contempt for all things. As one very popular modern “musician” said recently, “Sometimes I think I’m playing for the lunatic fringe. Luckily, it is widening. In fact, I think it is outdistancing the mainstream” (“Kinky and Country Music,” Los Angeles Times Calendar, September 30, 1973, p. 68). But the cultivation of insanity is the cultivation of irrelevance and death. Such people will not be with us long. The question of importance is, will we stand and move in terms of God’s Word and law?