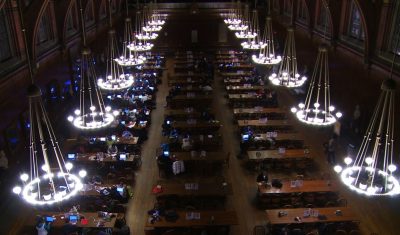 When the first academician, Satan, confronted Eve, he challenged her to abandon her naive faith and to subject the word of God to critical analysis. He raised the question, “Yea, hath God said?” (Gen. 3:1). Every word of God, he held, was a partisan and subjective word and should be given the careful scrutiny of critical analysis. Only then, he held, can man determine what the objective content of any word from God can amount to. And so was born modern education.

I recall during my university days one elderly professor who held that poetry was to be enjoyed, and any study of poetry should have as its purpose our greater appreciation of it. He was regarded with amusement by the other faculty members who were busy training us all to sit in judg­ment as little gods on Shakespeare, Milton, Donne, and others. The more apt we were in critical analysis, the better our grades, and the faculty’s opinion of us.

Our seminaries today do not really train pastors, although this is their formal function, and even though they do include a number of trash courses which are supposed to fulfil that purpose. What they do educate for is the production of an effectively trained group of critical analysts who can dissect Scripture but never or rarely see its relevancy to the real world.

Thus, all too often, churchmen not only are deeply imbued with an apologetics which has as its first principle autonomous man, but they also apply that autonomous man’s basic tool, the idea of critical analysis. Critical analysis brings all things before the bar of man’s autonomous mind as judge and arbiter of all things. Christian analysis subjects all things to the judgment of God’s enscriptured Word as the standard. The distance between the two cannot be bridged.

Critical analysis is a weapon of impotence. It engenders nothing: it can only dissect. I am regularly told that, while Chalcedon is doing some very important thinking, in order to gain more academic attention, we should do something in the area of critical analyses. My answer is that we are in principle opposed to such thinking, and we gladly leave that domain to the intellectual eunuchs of our time. We are interested in thinking for action. St. Paul had this in mind: “Study to show thyself approved unto God, a workman that needeth not to be ashamed, rightly dividing the word of truth” (2 Tim. 2:15).

This is not all. Critical analysis is a form of retreat from the world. Man is not autonomous, nor is he God. All thinking which presupposes man as the basic judge and arbiter involves a flight from reality. It is no wonder that the world of autonomous intellectualism, the modern uni­versity, has had an ivory-tower reputation. Critical analysis makes one remote from reality.

This remoteness is never more apparent than when the critical analyst tries to desert the ivory tower. Karl Marx was savagely critical of the ivory-tower mentality and the world of critical analysis. In his Theses on Feuerbach, Marx attacked the abstractness of critical analysis and called for its replacement by the revolutionary or practical-critical activity he fa­vored. In this scheme of things, autonomous man still remains. However, the critique is now no longer abstract and intellectual but intellectually and actively destructive and revolutionary. Autonomous man must smash and remake the world after his own image, analysis, and imagination.

These two concepts, on the one hand critical analysis, and, on the other, critical-practical revolutionary action, are basic to modern educa­tion. At every turn, the student is prepared to judge the world, and to require the world to meet his standards. Naturally, this involves judging his parents, teachers, and society. It also means passing judgment on the world, life, and God.

It should not surprise us, therefore, that the major area of struggle in the United States today is between statist, humanistic schools, and the truly Christian schools. This battle is not a dramatic, front-page story in most cases, although it has such moments. It is being fought in the minds and hearts of men, and in the courts of law. Too long a compromise with humanistic education has given the church weak men, double-minded, unstable in all their ways, incapable of receiving anything from the Lord (James 1:7–8), let alone acting ably for Him. Only as an education which assumes that every child is an autonomous mind, independent from God, and to be trained in a critical analysis, is replaced by an education which is in root and branch Christian, training and educating youth in the truly liberal arts (the arts of liberty or freedom in Christ, and dominion under His royal law), can we have an education which has a grasp on reality and trains men of power rather than eunuchs.

A society of eunuchs has no future, unless it makes eunuchs out of youth. A Christian society alone has an assured future: it has the cer­tainty of the sovereign and omnipotent God who cannot fail, and whose every word and purpose shall be fulfilled or put into force.

Our interest is thus not in critical analysis but in preparing men for dominion.