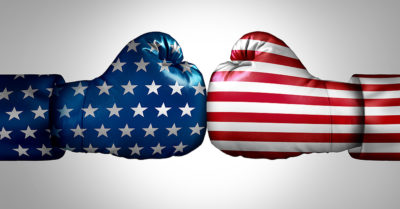 Alexander I. Solzhenitsyn has distressed many segments of Western society since coming to the West. The liberals had mistakenly assumed the Solzhenitsyn was one the them. To their shock, they found him speaking from a Christian perspective. Others had become upset at his criticism of the West, of democracy, capitalism, the press, and more. What is an anti-communist doing, criticizing democracy and its press, capitalism and socialism, and more?

All too much anti-communism is not only shallow but also involves a surrender to the basic evil. If we agree with our enemy on six to nine points out of ten, our quarrel is a family fight for power, not a principled conflict. Most Westerners agree with most of the Communist Manifesto, and much of it is now law.

This still does not get to the root of the matter, however. The root cause and foundation of Marxism is humanism, and humanism is also basic now to most of the politics, economics, capital and labor, education, churches, and press of the West. As a result, the disagreements between the Communist and the democratic powers are in essence a family fight, because both are agreed on the ultimacy of man. In practical terms, this means the sovereignty, not of God, but the state.

Franklin L. Baumer, in Modern European Thought: Continuity and Change in Ideas, 1600–1905 (MacMillian, 1950), has a chapter on modern man’s faith in the state as lord or sovereign. The title of the chapter is very apt: “The Mortal God.” As faith in God gave way to the Enlightenment, faith in the state replaced it. The state was seen as the lord over every area of life, including religion, and hence the state as lord and sovereign has the supposed right and duty to control every area.

Solzhenitsyn, in The Gulag Archipelago (Harper & Row, 1973), speaks with intense feeling of the Soviet tyranny. One of the moving charges of his narrative is the horror of Baptist children being separated from their parents because their parents had given them religious instruction, i.e., Christian teaching.

But consider this fact: in state after state in the United States, Baptist parents have been hauled into court and threatened with the loss of their children because their children were in schools which refused to submit to statist and humanistic controls. The charge against these parents? Contributing to the delinquency of their minor children! It has been demonstrated repeatedly that the results of standard testing show that the children in Christian schools are markedly in advance of children in state schools. The state is not impressed: the children are “deprived” of humanistic religious teaching, a “democratic” environment, and so on.

Why do the Soviet citizens do nothing about the persecutions there? Most know little about them, and it is safer to know nothing. The Soviet regime does not publicize its evils.

Why do U.S. citizens for the most part do nothing? Most know little about the persecutions and prefer to know less. Others, evangelical, Lutheran, Reformed, and modernist, will even appear in the courtroom or elsewhere to oppose those of us who make a stand. The press gives little publicity to these trials, on the whole.

Where humanism prevails, whether in the pulpit, classroom, or court, God will be denied, and Jesus Christ despised. They will say, like the men of old, “We will not have this man to reign over us” (Luke 19:14).

The issue in the Christian school trials, in the various church battles, with respect to Biblical law, in the church and state conflicts, is the reign of Christ. Humanism in its every form requires the reign of man and battles against the freedom of true faith.

Solzhenitsyn speaks of the ruthlessness at the heart of the Soviet authority. What it does not create and rule, it works to destroy. This should not surprise us: the lords of humanism cannot bear to see or tolerate the work of an alien God. Only that which they create and govern can thus be tolerated. As a result, isolated groups in the Siberian forests are hunted down and destroyed.

Humanism everywhere works toward the same goal. Only that which it creates and controls must be allowed to exist. All who do not conform are deformed in their eyes and must be controlled, remade, or punished. This means that Christ’s redeemed people are the enemy, and it means that we are at war. In that war, there are no neutrals. The power of humanistic statism looms very large and dangerously, but only Jesus Christ is the Lord, King of kings and Lord of lords. He alone shall prevail, and we only in and through Him. The tombs of His enemies are all over the world, and death and hell await the current crop. His is the empty tomb, and the victory. As for us, “whatsoever is born of God overcometh the world: and this is the victory that overcometh the world, even our faith” (1 John 5:4).