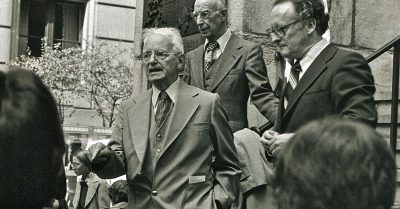 Whether men like it or not, the whole world will never be the same because of Cornelius Van Til. The thrust of his writings present man with an ultimatum: if you do not begin and end with the triune God of Scripture, then it will be man, man’s reason, or some other facet of creation. Like Joshua of old, Dr. Van Til’s summons to men was this: “choose you this day whom ye will serve” (Josh. 24:15). For men with a divided allegiance, or with a lust for philosophical or theological respectability, this was most offensive.

I once had Dr. Van Til speak to ministers and laity here in California in the 1950s. It took some effort to get a goodly number of the clergy there. The meeting was held in a Methodist church in order to make it more “neutral,” and I consented to the arrangement. Van Til preached a very eloquent sermon on 1 Corinthians 1:18–31. He spoke powerfully of the hostility to the pure gospel as foolishness and a stumbling block to men but as truly the power and wisdom of God. When it was over, men and women told me at the door that they had never heard the gospel preached more powerfully and clearly. The ministers, gathered at the front, told me that the meeting was a disaster, that Van Til was “too philosophical” to understand. Their problem was that they understood him too well. Van Til might be difficult to follow as a theologian-philosopher because of some technical language, but, as a preacher, he was a master of clarity and power.

Cornelius Van Til was a giant of the faith, one of the greatest men in the history of Christianity. Many in the United States are doing their best to forget him, but his influence keeps expanding. His books are mainly no longer kept in print, although he, over the years, refused to take royalties on his books to facilitate their continued printing. All the same, people are Xeroxing them and treasuring them.

Van Til’s Christian Theistic Ethics can be called a key work in prompting Christian Reconstruction. His Defense of the Faith has been to countless numbers their introduction into the freedom and the power of Van Til’s thinking. One book after another has been seminal in opening new areas of Biblical insight and application.

What is needed now is massive funding to bring out the collected works. There are important and as yet unpublished works that should be made available, and out-of-print works that need reprinting. Ross House Books has available two works on Van Til, a symposium, The Foundations of Christian Scholarship, edited by Gary North, and my work on his thinking, By What Standard? But more is needed.

Van Til’s future influence is assured. The question which remains unanswered is whether American Christianity will be judged for its neglect of him, or whether Van Til’s influence will become a part of its renewal.