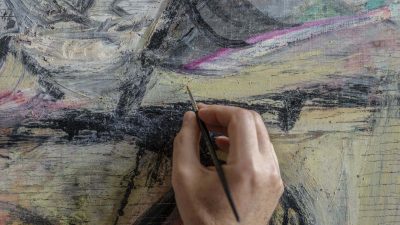 A very basic fact hides behind a rather difficult philosophical term, epistemological self-consciousness. What does this mean?

Two simple illustrations will help us grasp its meaning. An artist with marked epistemological self-consciousness is Willem de Kooning. De Kooning paints in terms of Nietzsche’s statement, “The will to a system is a lack of integrity.” For de Kooning, no system of thought or of art is possible, because there is no meaning. As a result, his painting is simply meaningless daubs and blotches, a defiance of meaning and pure self-ex­pression, expressive of the moment and its impulses. According to Hess, de Kooning paints in terms of “No-Environment,” and this concept Hess defines for us:

NO-ENVIRONMENT — the metaphysical and social alienation of man from society and the nightmare of urbanization have been a preoccupation of modern writers from Marx and Dostoyevski to Heidegger and Celine. For de Kooning, however, “no-environment” is a metaphysical concept with physi­cal materiality — with flesh and cement. In the Renaissance, he has pointed out, the painter located a Christ and a Roman soldier in their appropriate “places.” What is a “place” today? (Thomas B. Hess, Willem de Kooning [New York, NY: George Braziller, 1959], p. 18)

For de Kooning, man has no “place,” and the very idea of “place” is meaningless. There is “no-environment,” because there is no framework of meaning for anything. As a result, de Kooning paints nothingness, because there is really nothing else to paint. The world is a world of nothingness, and, for many artists, for art to be realistic, it must por­tray nothingness. Modern art is not photographic, but it is realistic. For modern art, reality is brute factuality, it is meaninglessness. The interest of modern artists in Buddhism is because of this agreement with Buddha that not God but nothingness is ultimate. As a result, these men are at war with the world of God and law, the world of meaning; for them, the true faith is in nothingness. Their nihilism calls for the destruction of the “pretense” of meaning. Of such men, we can say that they have a high degree of epistemological self-consciousness. They know that on their atheistic premises a man can know nothing, and some of them, the “hip­pies” in particular, try to live in terms of their faith.

For a second illustration, take any modern, atheistic scientist. The sci­entist denies that there is a God who has created all things and whose predetermined plan governs all things. Like de Kooning, the scientist be­lieves in a meaningless, “no-environment” world where nothing has a “place,” because the very idea of a “place” for things means an absolute law and plan. But the scientist still works in his laboratory as though a plan existed; his scientific theories assume a plan and a place for all things, and he operates in his science on the assumption that there is a meaning and a direction in the universe. If he allowed his atheism to govern his science, the scientist would have to deny his science as surely as de Kooning has denied everything that art once meant.

De Kooning, of course, does not have full epistemological self-con­sciousness. This full self-knowledge would be suicidal for unbelieving man, and he fights against it. Without God there is neither meaning nor life. Every non-Christian presupposes at some points the existence of God, even as he consciously denies Him, because without Him all knowledge and meaning would be impossible. But God steadily moves all men and history to epistemological self-consciousness. He forces men to know that without Him they have no foundation, that their lives are built on sand.

Men want the world of law and order which God created, but they want it without God. They complain because all respect for authority is disappearing, and their children fail to give them the honor and obedi­ence which is their due. But if God’s absolute law and plan are withdrawn from education and denied, a child and an adult is given then the right to think that his plan is just as good as anyone else’s plan. If there is no God, then there is no authority. A very brilliant college student, who headed a criminal gang, told me that there was no such thing as crime, because there was no absolute law. His very fine parents were deeply hurt and shaken by his criminality and his arrest and trial, but the young man was not. His education had told him that man was merely a product of chance evolution, and he believed, therefore, that all the old standards were false. By the age of twenty, he had already lived more luxuriously than his well-to-do parents ever had, and enjoyed more of the “best” pleasures of life than they ever could; a year in prison was a cheap price, and a kind of vacation.

This young man had more epistemological self-consciousness than his parents. He knew at least the basic choices: God and moral law, versus no God, no law, no meaning. The trouble with most men today is that they want the “best” of two worlds, the moral order and meaning of God’s world, and the freedom from God of atheism. The liberals, as a result, dream of a new world order in which all men will be well-behaved broth­ers, as good as the best Sunday school children, having full freedom from God’s moral law without misbehaving or becoming socially destructive. The non-Christian conservative thinks that by winning some elections he can restore the old godly law order and authority, and have a free country again, when most men are drifting into de Kooning’s world and have no use for the ideals he espouses. Man cannot reestablish true authority and law order without first acknowledging and obeying the true authority, the triune God.

As a result, as history moves ahead, because epistemological self-con­sciousness increases, sinful man’s rebellion against authority increases, because he progressively denies all authority and all meaning. Once non-Christian man was held in line by some of the God-given institu­tions, established at creation. The family in particular long functioned as man’s basic policing power and source of order. But as men developed the principles of their unbelief, of their rebellion against God, they pro­gressively rebelled against every authority God set up, in family, state, school, society, and everywhere else. Their only authority has become steadily their own will. Atheism itself is destroying the family, whether under communism, socialism, or democracy. Atheism is destroying au­thority in every area. College students are taught disrespect even for their teachers by their teachers, because the corrosive face of atheism destroys all authority. Instead of community, there is only a mob. Students were once self-reliant, individualistic, capable gentlemen who were taught how to exercise authority and also submit to authority. Today, they are only members of a mob, meaningless blobs because for them there is no mean­ing apart from their momentary impulses.

It is therefore of the utmost importance for Christians to develop epistemological self-consciousness. This means Christian education. It means a Christian philosophy for every sphere of human endeavor. It means recognizing that every issue is basically a religious one. As Stacey Hebden-Taylor has written, in a very important study, “He who rejects one religion or god can only do so in the name of another” (E. L. Hebden Taylor, The Christian Philosophy of Law, Politics and the State [Nutley, NJ: The Craig Press, 1967], p. 22). The humanists religiously deny every authority other than man, and their totalitarian state is a deliberately conceived man-god defying the order of God with man’s own order. The intensely powerful religious force of humanism, with all its hatred of God and God’s world of law and order, can never be defeated by people whose ground of operation is vaguely Christian and largely humanistic. The lack of Christian epistemological self-consciousness is one of the ma­jor reasons, if not perhaps the major, for the growing victory of the en­emy. Christians are too often trying to defend their realm on humanistic grounds, with Saul’s armor, and as a result, they are steadily in retreat. Often, they are actually fighting for the enemy without knowing it

But victory should be ours. The more the enemy becomes what he is, the more his epistemological self-consciousness matures, the more im­potent he becomes. What competition is a “hippie” for a truly Christian man? What competition is a de Kooning or a Bob Dylan for a Johann Sebastian Bach? But if we rear up a generation on humanistic premises, they will follow humanistic leaders. Humanism is progressively decaying; the more it becomes itself, the more repulsive and impotent it becomes. Nothing is more deadly for tares than maturity: they are then openly identified as tares, as worthless and poisonous, as definitely not wheat.

Today, the impotence and confusion of humanism is marked. It is wal­lowing in failure all over the world, in failure, but not in defeat, because there is no consistent Christian force to challenge and overthrow it.

Nietzsche said, “The will to a system is a lack of integrity,” that is, to believe in a system of truth is to submit oneself to a higher law, to God. The strength of the humanists is their denial of a system: it is their lawlessness. They have been successful destroyers, but they cannot build. The strength of the Christian can only be a “system,” i.e., systematic theology, a knowing, intelligent, and systematic obedience to the triune God, and a faithful application of God’s law order to every sphere of life. If the Christian operates without this system, he is a humanist without knowing it. And this is the reason for the very great impotence of conser­vative, evangelical Christianity: it is neither fish nor fowl.