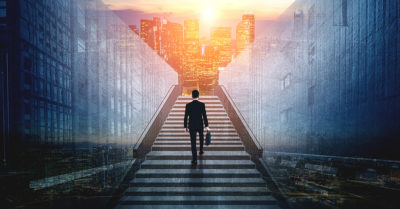 The old Christian doctrines of estate and calling were often violated in earlier centuries, but their importance was nevertheless very great. Even in violating them, men knew that their office or position, and their calling, made certain duties mandatory, and that both God and man expected their fulfillment from them. The common acceptance of the doctrines of estate and calling compelled men to assess themselves and other men in terms of a God-centered standard.

With humanism, a steady decline and then a disappearance of the ideas of estate and calling began. How extensive the loss is will appear in the fact that the once-common saying, “Act your age,” a relic of the idea of the dignity of estate, is now almost gone. Thus, I have a picture of a woman in her eighties sunbathing in a flimsy bikini at Nice, France, a fitting symbol of the disappearance of the old doctrine. People who try to act their age are now often ridiculed, because “you’re only as old as you feel” (or pretend you feel). The mind, not objective reality such as age, God’s law, and other people, now governs.

With the loss of all strong and theological ideas of estate and calling, men now live for themselves, and they make their own needs and whims their end or goal. The purpose of life is sought in man’s own desires, not in God’s sovereign purpose and order.

This raises a very significant fact: the criminal is the man who lives for himself, makes his wishes and needs his law, and disregards the law structure of God and man. He seeks his purpose and goal within himself, in his own fallen nature, not outside himself or in reference to anything higher than himself.

Thus, the man of today and the criminal are essentially in agreement on their philosophy of life. Each makes himself the measure of reality and the source of his own law or standards. What then separates the law-abiding citizen from the criminal? Both alike seek their own fulfillment without regard for God’s law and order. Both are alike man-centered to the core of their being.

Their only essential difference is that the man of today tries to realize himself within the law, whereas the criminal operates outside the law. Both, however, have abandoned the idea of objective law and the sovereignty of God over all things. The idea of law as a convenience or man’s own desire has become a destructive one for all concerned.

As a result, the children and youth of today show that the distinction between the man of today and the criminal is being blurred. A U.S. Senate subcommittee has estimated, in April 1975, that vandalism in state schools now costs about half a billion dollars a year; the murder of a hundred students, and rape, robbery, and assault on school premises are a part of an accelerating rate of school crime. As more than one teacher has reported to me of late, the line between a hoodlum and a state school pupil is becoming more and more vague and blurred.

Of course, their elders are busy blurring the lines also. A UPI news item from Olympia, Washington, reads, “Proposed legislation before the Washington House of Representatives to legalize prostitution provides that licenses be given ‘only upon satisfactory proof that the applicant is of good moral character’” (Santa Maria, CA, Santa Maria Times, February 20, 1975, p. 11).

Humanistic scientists who were earlier predicting a new paradise when man became “liberated” from Christianity, are now busy predicting the end of the world and man with pompous solemnity and no sense of their own guilt. Having “liberated” man from God’s law, they are amazed at his supposed irrationalism, refusing to see it as the logic and reason of man-centered unbelief. Loren Eiseley, in the April 1975 Science Digest, writes of man, “His mounting numbers and ideological fanaticism may force his disappearance into ice and darkness just as he arose from those same natural forces he has threatened to outwit.”

Men who have proclaimed the death of God have not realized that they thereby proclaim the death of man, of godless man. The judgment of the living God is clearly in evidence on them, and an age without God’s law is an age of death, because the condition of life is law, God’s law (Deut. 28).

The future is thus a very good one for those who are the redeemed in Christ and who, in terms of God’s law, move in terms of recognition of their estate and calling. The rest will perish, because, with their every action, political, economic, educational, familial, and personal, they invite death. As Wisdom declares from of old, “He that sinneth against me wrongeth his own soul: all they that hate me love death” (Prov. 8:36).

In terms of God’s law, we have a plan of action for dominion over all things, a guide to knowing our estate and calling, and the means of the fulfilling thereof. In terms of God’s law, we live, not unto ourselves or for our own wishes, but in terms of His calling and purpose, knowing that only in this way can we ourselves be fulfilled. As our Lord declared, “But seek ye first the kingdom of God, and his righteousness; and all these things shall be added unto you” (Matt. 6:33). He having made us can alone be our fulfillment. The necessary condition of our life is the sovereign God: without Him, we have no estate and calling, and, finally, no life, society, or culture. In the graveyard, there is no estate and calling.