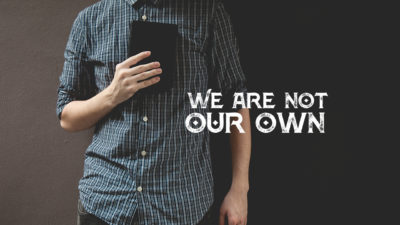 God’s law-word is binding upon man because man is God’s property. Man has no claims on or against God, any more than the clay can say to the potter, “Why hast thou made me thus?” (Rom. 9:20). We are God’s property by virtue of creation, and, because of redemption, we are doubly His, “bought with a price.” Hence “we are not (our) own” (I Cor. 6:19-20). We are the Lord’s, and His right to use us and to govern us is total. Our creation, and election or reprobation, is of His sovereign counsel and choice, not ours. Thus, we have no basis for any valid objection to anything God does. In the famous case of the man executed for gathering firewood on the Sabbath (Num. 15:32-36), it was Gods prerogative to do as He had decreed. We can understand the decision as judgment on a presumptuous sin (Num. 15:30-31); the offender deliberately expressed his contempt for God’s law and God’s provision. It was an act of defiance and treason. However, whether we understand God’s law or not, or whether or not it seems reasonable to us, it is binding upon us, because the reason it rests on is God’s, not man’s.

Moreover, whenever man sets himself up as the judge over God’s word, deciding for himself which law is still useful to him or not, the word of God ceases in practice to be God’s word and becomes merely a resource man utilized when he needs it. The authority then is man, not God. Time Magazine, in commenting on the widespread ecclesiastical toleration and even acceptance of homosexuality, reported on the reaction of many conservatives, noting, ‘”Since the Bible is so explicit, they wonder if the church will have any basis for imposing any restrictions on human behavior if it votes moral acceptance of active homosexuality.”[1]Exactly. The new moral basis and authority is the word of man, or the word of the church or state. By such decisions, men, churches, and states declare themselves to be gods walking on earth and delivering the new law for man. By denying the binding nature of the Bible, they are declaring their word to be the higher and more authoritative word. The criterion for action becomes then the word and will of man.

The practical implications of such a perspective on culture appear in an interview with actor James Caan, who confesses that nothing holds his interest very long, except acting, and acting must be fun to hold his interest. “It’s not only my acting, but I don’t do anything unless I’m going to enjoy it or feel good about it.” Caan dislikes work and responsibility: “When you work, you have to assume the responsibility and have the discipline, but I don’t want to have to do anything. The more I have to be somewhere at a certain time or do something, the more I don’t want to do it.” He admits to guilt feelings but hopes to rid himself of them.[2] Caan expresses with honesty and candor the characteristics of most moderns. When man denies God, he substitutes for God either his own ultimacy or the ultimacy of some institution or agency. If he affirms his own ultimacy, then he denies the validity of any authority over him, and he rebel against authority and discipline.

The breakdown of the authority of God’s word begins, however, in the church. It is not only antinomianism which marks most churches but anti-Christianity. It is not only the law, which is set aside, but the historicity of Scripture, God’s grace, mercy, justice, and love. Everything is re-interpreted by the theologians of surrender to mean as little as possible, to be as little binding as possible, and to be in effect another word, the word of the theologian in question. The fact of creation becomes a nebulous and non-historical fact; revelation becomes a historical process whereby man comes to a new insight into himself and the world; and the resurrection becomes an impossible possibility which has nothing to do with the actual resurrection of the physical body of Jesus Christ. Consider, for example, this conclusion concerning the resurrection by Norman Perrin, in a small book of 85 pages, cited as “a help to pastors who proclaim the resurrection message to discover the unique resurrection accents of each evangelist.” The resurrection narratives are to Perrin not history but literary expressions of theological viewpoints. He concludes:

With such a perspective, the church would never have been born, and with such a faith, the churches now holding it will, happily, either soon perish or be changed.

Too often the modern theologian and churchman goes to the Bible seeking insight, not orders. Indeed, I may go to Calvin, Luther, Augustine, and others, to scholars Christian and non-Christian, for insights, for data, and for learned studies, but when I go to the Bible I must go to hear God’s marching orders for my life. I cannot treat the Bible as a devotional manual designed to give me peace of mind or a “higher plane” of living: it is a command book which can disturb my peace with its orders, and it tells me that I can only find peace in obeying the Almighty. The Bible is not an inspirational book for my personal edification, nor a book of beautiful thoughts and insights for my pleasure. It is the word of the sovereign and Almighty God: I must hear and obey, I must believe and be faithful, because God requires it. I am His property, and His absolute possession. There can be nothing better than that. To be my own property and possession in a meaningless world is the ultimate in misery and grief. But when the great and high God, possessor of heaven and earth (Gen. 14:19, 22), makes me His elect possession by the adoption of grace through Jesus Christ, I must answer to His every enscriptured word, “Speak, LORD, for thy servant heareth” (I Sam. 3:9-10). This is God’s calling and requirement of me, and it is my privilege to hear and obey, for His word is life, and it is health (Ps. 119).

In terms of God’s ownership, we yield ourselves to Him as a living and continual offering and sacrifice (Rom. 12:1). We give our children to Him in baptism from infancy, not because of some mystical meaning, but because we confess thereby God’s property rights over us and our children, and we vow to bring up our children as God’s possession. We tithe because God, who owns all of us, requires a percentage for His work. All that we have, and all that we are, our persons, families, possessions, and time, belong to the Lord. The whole meaning of the festivals and of circumcision-baptism, the Passover-communion, and all rites and ordinances of the life of worship, simply set forth differing aspects of God's property rights over us, and His gracious covenant to care for His own. When we tithe, baptize our children, and obey God’s law, we confess thereby that we are not our own, but that we have been bought back by the Lord at a price, and we are therefore totally His possession. Thus, whether we live, or whether we die, we are the Lord’s (I Thess. 5:10), and in all things we are to give thanks, because in all things we have no claim on the Lord, and we are the recipients of His grace and mercy (I Thess. 5:18). Thus, we must be under God’s law, not man’s, because God is God: He is the LORD.