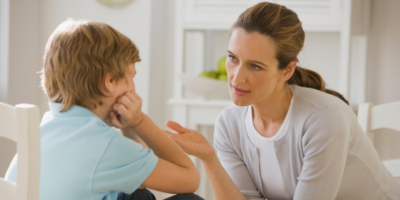 At a doctor visit when my son was quite young and about to get a shot, I remember reeling when the nurse told him that he should not worry, that it wouldn’t hurt. Her tone was consoling, friendly, and compassionate, but just the same, she wasn’t telling the truth. I let him know that it was going to hurt, but that I would be there with him. I made a commitment to myself that I would be frank with my children and never engage in misleading them. This led to times when I had to admit my ignorance on certain subjects. Like the time my 4-year-old asked me if his bunk beds would be in heaven. He loved sleeping in them, and somehow it was an important thing for him to resolve. I was not as theologically schooled as I am today, but answered, “I don’t think so, but I’m sure that when you get there, you’ll find that you don’t care as much about it as you do now.”

It is important for children to develop a sense that they can trust their parents to tell them things as they really are, rather than sugarcoat or mislead them. It is especially important for homeschooling parents as they will have the major share of input into their children’s lives and need to establish a foundation of honesty. I am not suggesting that a very young child be burdened with the details of a violent death in the family, but by the same token, whatever is explained needs to be the truth, even if it is a truncated version. Integrity should be the hallmark of the parent/child relationship.

In the academic realm, homeschooling parents need to establish definitive standards in grading and evaluating their children’s work, thereby practicing academic honesty. I cannot tell you the times I was tempted to do otherwise when one of my daughters continued to struggle with simple arithmetic. She was truly trying hard, but was literally not making the grade. The temptation was intense to tell her that she had obtained a good mark. Instead, I explained that both of us (teacher and student) needed to go over the material again. Sometimes it took weeks for her to get the 100% she wanted so much. Had I given her an “A” just because she tried hard, the actual “A” eventually earned would have had little significance.

The greatest area that parents need to be honest with their children has to do with character issues and being frank about their own past sins and shortcomings. Since all of us have a “story” that led to our coming to faith and repentance, it is important that from the time our children are very young, they hear these stories within the context of God’s law-word. These can serve as real-life lessons that take on added value because they are part of the family history.

For example, there is a story my children have heard over and over again about how I, as a child, would sit stubbornly at the table and refuse to eat meals I didn’t like. Cajoling, persuasion, removal from the table, and making it so one meal (no matter how cold or wilted) was carried over to the next, were frequent occurrences at my house. My stubborn defiance would reach such peaks that my mother, in her frustration, would on occasion, take the split pea soup or whatever I was defiantly refusing to eat and bring me into the bathroom and dump it on my head over the bathtub. (My healthy hair over the years may be due to this unusual composting!) Apparently it was quite a spectacle, one that my older brother and sister relished. I can recall one day when they were particularly gleeful over my impending doom and recited all-too-audibly for my mother to hear, “Hail Mary, full of grace, I hope she gets it in her face.” Much to their surprise, they were the proud recipients of my uneaten meal!

My children laugh hysterically at this account, picturing me with food on my head. Each of them was originally introduced to this story as a result of manifesting stubborn defiance. By using my own sinfulness as a real-life example, I was able to impart an important lesson at an appropriate time. I additionally explained that my mother’s solution was not a Biblical one and that her frustration grew out of not exercising God-ordained remedies. You see, I wasn’t afraid to let them know that I had been a stubborn child. I maintained the fact that I, too, was a sinner and could well identify with their own rebellion, but as a parent it was my job to apply God’s Word to our lives. Additionally, this story serves as a good lesson in not being happy when a brother or sister is under discipline. The picture of my siblings with my food on their heads brought the point home quite well.

By the time children have been around for a decade or so, they often conclude that their parents are “out of touch” with their feelings or concerns. This is where a steady diet of a parent’s stories (times when the right choices were made and times when they weren’t) accomplishes two things. First, the child realizes that mom and dad were young once themselves. And, second, the parent is not hindered by the concern that he or she is being hypocritical (“I did stuff like that when I was a kid. Who am I to talk?”), but rather knows it is a faithful approach to uphold “Thus saith the Lord.”

Parents should be able to look into their children’s eyes and honestly, without hesitation, proclaim they have never intentionally lied to them nor led them to believe something that wasn’t true. All the more reason for parents to be faithfully reading, learning, and applying the Word of God to their lives so that when times of defiance come from their offspring, they are not stumped as to applicable teaching or hampered by past misdeeds of their own.

I don’t imagine parenting has ever been an easy calling. There is a measure of humor in realizing that all of us began life as children ourselves. So, there is little room for sanctimonious attitudes on our part when it comes to admonishment or correction. So, look into your own past and evaluate the thoughts, words, and deeds from your past and get ready to begin a “Once upon a time …”

Let your light so shine before men [and especially your homeschooled children], that they may see your good works [faith and repentance], and glorify your Father which is in heaven. (Matt. 5:16)