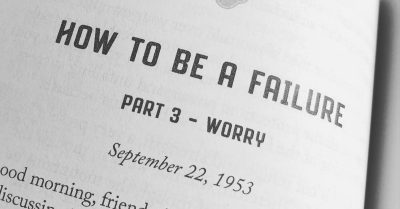 Good morning, friends. Last week we were discussing independence of nature as a sure and easy means to failure. The man who says I owe no man anything, nor am I in the least way indebted to God has the continual frustration of having nothing more to rely on than his own sorry self. The independent man who rules over his own life apart from God has nothing more at his command than his own feeble and frail power. But if Christ rules over us, we have at our disposal all the protection, power, and unfailing success of God Almighty.

This morning I’d like to discuss another easy step to failure and frustration. There is no easier road to trouble and defeat than worry. As someone has aptly stated it, “Why pray, when you can worry?” After all, prayer might solve your problems, but if you nurse your worries carefully, they’re bound to increase and multiply. Go at it conscientiously and carefully and you’ll be sure to lose some sleep over your troubles. Worry some more, and your digestion will be affected, and you might even develop ulcers. Keep it up, and all your friends will know that you really are worried—and they’ll feel sorry for you—from a safe distance.

The man who worries is bound to fail sooner or later because he has a bigger problem locked up in his head than anything life can bring him. Some years ago, a man living on the edge of town felt very miserable about the neighbor’s rooster, which had a habit of crowing towards sun-up every morning. He had a beautiful home, an excellent income, a young and beautiful wife, a circle of famous friends, in fact, everything to live for, but he worried himself sick over that crowing rooster, until he became a burden to his friends, a pain to his wife, and, above all, a torture to himself. When he protested bitterly to his poor neighbor about the rooster, the man answered that, after all, it couldn’t be too bad, because the cock only crowed three times, and then towards morning and close to the man’s rising time anyway. But the rich man protested bitterly that although the crowing wasn’t too bad, the waiting was what ruined him. “If you only knew,” he declared, “what I suffer waiting for that cock to crow!”

That’s what worrying is like. It involves a bigger problem in itself than anything life is likely to bring you. It wasn’t the crowing cock that caused the trouble: it was the sick mind of the rich man who heard it.

Worry comes wherever there is a lack of trust in God, and it means frustration and inner failure. Go ahead and worry, if you want to fail, but remember this: the real problem in your life is not those things which have happened to you or might happen to you but your own doubting heart. The biggest enemy of the man who worries is himself. No enemy can rob him of more sleep, poison more of his food, spoil more of his days, and cheat him of more happiness and success than worry—and it comes from his own mind. If you’ve been busy manufacturing your own poison, it’s high time you took stock of your own life.

If there is a God, it doesn’t make sense to worry, does it? If God is God, then He is capable of assuming your burdens, is He not? And if God indeed revealed Himself in Jesus Christ, then we have a God who welcomes and takes our burdens, makes all things, including evil, work together for good for us, and in everything supplies our needs. Is there any sense in worrying when you have a God like Jesus Christ?

Go ahead and worry if you want frustration and failure, but if you want the blessed peace and assurance of God, stop trusting in your own little self and trust in God instead. Any man who trusts in himself has grounds for worrying, but the man who trusts in the Lord has grounds for serene confidence. Our God is able, and with Him nothing is impossible. When we by faith become members of Jesus Christ, then we are made partakers of God’s unshakeable success. We know that He will lead us safely through the deep waters of trouble and affliction into the safety of His arms. In this confidence we invite you to a life free from worry, to a life in Christ, “Casting all your care upon him; for he careth for you” (1 Peter 5:7).

“The eternal God is our refuge, and underneath are the everlasting arms” (Deut. 33:27).