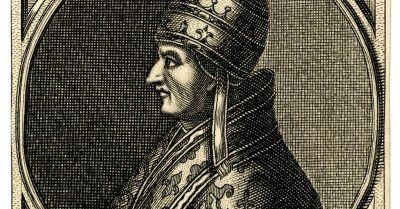 Disasters are often the works of able men who, seeing a problem more clearly than others, try to solve it dramatically, but with the wrong answers. In the twentieth century, we have seen the damage done by such solutions as World War I and the Versailles Treaty, the League of Nations, World War II and its treaties, the United Nations, Korea, Viet­nam, Keynesianism, and much more. It is not enough to condemn sins and errors: it is necessary to understand what wrong religious premises went into them.

One of the ablest men of history was Innocent III, who in 1198 be­came pope. He was faced with a serious problem: Europe was nominally Christian, but in reality had relegated Christian faith to a formal and irrelevant position in political and social life. In Frederick II (1194–1250), the Holy Roman emperor, this indifference to the faith was more openly expressed, because Frederick’s power gave him the freedom to do it. Fred­erick ruled more like a Muslim sultan than a Germanic king. He kept a harem, guarded by eunuchs, a troupe of Muslim dancing girls, and was generally skeptical about religion. Frederick spoke fluently in German, French, Italian, and Arabic, read both Greek and Latin, and was widely read in ancient and current works of scholarship. He moved with an in­difference to moral and religious considerations and held to a humanistic perspective.

Most Europeans were either not as “advanced” in their skepticism, as was Frederick II, or not as vocal, but most churchmen and laymen shared Frederick’s indifference to Christian faith. Innocent III thus was the spiri­tual head of a Christendom seriously adrift in its moral and religious foundations. Innocent had the power to assert authority in one realm after another, enough to break rulers, and he had the power to institute reforms. Both answers he felt were insufficient, however necessary, and not to be neglected. What was needed above all, he felt, was a revival of religious fervor. This he believed could best be generated by a crusade, and the result was the preaching of the Fourth Crusade. This was begun in 1199, and every effort was made to keep this crusade under control and strictly Christian in purpose. The result was one moral disaster after another. One of the worst consequences was the sack of Zara and then of Constantinople in 1202 and 1204, and, in 1212, the horrors of the Children’s Crusade. What was begun as a means of reviving Christian faith and fervor became a powerful instrument for unleashing evil and destructive forces on all of Europe and the Byzantine Empire. The Albi­gensian Crusade in 1208 plunged southern France into blood, and Inno­cent’s dream began to unravel.

Innocent was an Italian patrician of Germanic blood; eight popes came from his family. He sought to make Europe a single moral and re­ligious community under his spiritual leadership. An able administrator, his reforms and reorganization of the papal chancery greatly improved and strengthened papal government. His idea of reviving faith in Europe, however, led only to disasters and griefs. Reform by new action is not reform when the old man is still involved; all of Innocent’s efforts only gave morally indifferent and evil men new scopes for the enactment of their greed and evil.

Innocent’s program, which has roots in old Rome, is still very much with us. From Woodrow Wilson to the present, the Innocentine idea of moral revival and accomplishment has led the United States into one crusade after another, with results even more deadly than those of In­nocent’s crusade. All over the world, indeed, men share this same faith: institute a good program of moral action to save the world. From wars, to leagues and unions of nations, from army corps to peace corps, the plan is put into action, and things somehow grow worse. No moral cause can survive immoral men, nor can the world and history be regenerated by unregenerate men.

Crusades now are as religious as ever, but they are proclaimed by politicians, not by popes. Men run for political office, and gain control of nations, by promises of another crusade, this time, the candidate in effect declares, with the right spirit. A new and “innocent” group of men will supposedly lead us into a true crusade.

The Children’s Crusade, in which tens of thousands of children ended as slaves, prostitutes, or dead, began with such a faith. The average age of the children was twelve; their belief was that their “innocence” would lead to miracles and deliver the Holy Land to them. Many ended in mas­sive corruption, cannibalism, and horrors, only a minority retaining their faith. Other and minor child pilgrimages occurred later, all evidences of the humanistic faith in the natural innocence of children, and the power of that innocence. This same faith in the untainted innocence of youth marked the student movements of the 1960s: like the pretentious youth of the Children’s Crusade, the Youth’s Crusade of the 1960s pitted its ostensibly holy innocence against the corruption of the establishment; the confrontation showed the prevalence of sin on all sides. Another crusade failed, but not man’s faith in crusades.

For us as Christians, the crusade offers no hope. It is a costly evil. The crusade puts its hope in some men’s innocence and action, and it leads to Phariseeism, hypocrisy, and the brutalities of self-righteousness.

For the Christian, the answer begins with regeneration, and it contin­ues with obedience to God’s law. It means restitution, Christian educa­tion, the increase of godly knowledge and dominion, and the centrality of the family as a unit under God and to His purposes.

When Innocent came to office, indifference and hostility to the church were common among lay people, and prevalent in all circles. During his eighteen-year pontificate, Innocent punished two emperors and seven kings; he acted with vigor, and fearlessly. All the same, he left the situa­tion worse than he found it: power had been countered with power, some­times wisely, sometimes wrongly, but the faith was not advanced, and indifference only grew. The crisis was not resolved but only aggravated.

Men can be indifferent to problems; they can aggravate them; or, by the obedience of faith to the law of God, they can take steps to resolve them as He requires it.