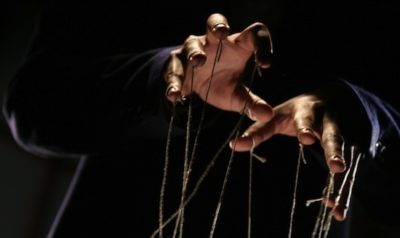 Many people like to believe that somewhere invisible rulers pull the strings which govern all of us. Such a belief denies that man is created in the image of God and is governed by two basic motives. First, Paul tells us, all men know the truth of God, things visible and invisible, because they are written in every atom of our being by our Creator. Men "hold" or suppress these things because of their unrighteousness or injustice. No man anywhere can escape this knowledge (Romans 1:17-21). For this reason all men are "without excuse." Second, all men everywhere, as sons and daughters of Adam, are fallen, and they seek to be their own gods, determining law, morality, and all good and evil for themselves (Gen. 3:5). The strings that pull us come out of our heart and mind.

In the modern age, man has reversed the historic definitions of knowledge. First, according to Scripture, to know, love, and fear God is the beginning and essential part of knowledge and wisdom. Second, according to classical Greek philosophy, knowledge is gained by ascertaining the abstract universal ideas of the totality of being. Third, for science, especially after the Enlightenment, it was knowing the facts. This view is still very powerful, although it has been demonstrated that our presuppositions determine what is for us a fact.

With Kant, a fourth view of knowledge came into dominance. Kant, in his preface to the second edition of his Critique of Pure Reason, stated the matter bluntly: "Hitherto it has been assumed that all our knowledge must conform to objects. But all (such) attempts...ended in failure. We must therefore make trial whether we may not have more success in the tasks of metaphysics, if we suppose that objects must conform to our knowledge." In other words, the "real" world is what our mind says it must be.

If you grasp Kant's implication, then you will understand the modern world, its religion, politics, art, education, and much, much more. The source of truth is no longer, for the modern mind, to be found in God, ideas, or facts, but in our own being, in our rationality, or in our feelings, according to some.

Hegel embraced Kant's thinking and furthered it. In his The Phenomenology of Mind, he wrote, "I am I in the sense that the I which is object for me is sole and only object, is all reality and all that is present." The "I...is all reality!" For Hegel, the rational is the real; reality is what our reason says it must be. With such a premise, existentialism was inevitable.

I have often called attention to the fact that modern man has a will to fiction. His basic reality is his imagination, and he lives out his life in his imagined world instead of reality. One of the most unpleasant letters I have received (and they are many, often foul-mouthed, from churchmen and atheists alike) declared me to be vicious because I was undercutting the dream world of harmless peoples.

But is it harmless to live a lie? Never before in all of history have people lived so extensively in terms of their dream worlds rather than reality. They watch television by the hours, see movies, read fiction, and they believe that the world of their imagination is better than God's reality. Communists are not what they say they are but what our imagination wants them to be. Politics is going to give us our hopes because we believe in it. Churches too often succeed by preaching smooth things and an easy "gospel." When an artist asked to have permission to paint Cromwell's portrait, Cromwell granted it on the condition of honesty, that he be painted warts and all. No portraitist is likely to hear such a demand in our time. We want to be seen as we imagine ourselves to be. The modern mood was well stated by an early Romantic poet, William Blake, who complained, "O why was I born with another face!" The "real" face of his imagination was somehow not in place.

Hegel's real world was the world of consciousness, the mind of man. This is the "real" world of too many people now, in the churches and outside of them. A simple and grim evidence of this is that pastors who have congregations of elderly people find them complaining if the pastor talks about the evils of abortion. This, they say, is of no meaning to them, since they are past the child-bearing years; they want sermons which are "personally" helpful. When I hear, as I do regularly, of such common comments in our best churches, I am sick at heart and sometimes shiver in horror at God's certain judgment. Such people seem unaware that "our God is a consuming fire" (Heb. 12:29). Too many people, I find, in their vain imagination reduce God to a Father Christmas. They use Biblical language with idolatrous purposes.

Yes, we do have invisible rulers, in a sense, in various philosophers and their ideas, but they rule over us because they please us in their insistence on man as his own god. The true ruler of all things is Christ, for the government is upon His shoulders (Isa. 9:6). He warns us against ascribing the government of things to men or to secret Satanic conspiracies. In Revelation 2:24, He condemns all who study "the deep things of Satan," i.e., Satanic conspiracies. To hold that the creature, or any combination of creatures, can take over control from God is a fearful sin. In Psalm 2, we see that God laughs at all human conspirators against Him, and at their believers.

Because we do not live by every word that proceeds out of the mouth of God (Matt. 4:4), we are the victims of our sins, and of those who choose to exploit our sins. Too many people, for example, rail against "the international bankers" without stopping to think that their debt-living creates inflation, and the kind of banking we now have. Of course, it is always more popular to talk about the sins of other peoples and not our own! The prerequisites of all blessings from God include the confession of sin, our sins, not other people's sins. The old Office of Compline, which ended the day, had a telling prayer, a general confession: "I confess to Almighty God, the Father, the Son and the Holy Ghost, and before all the company of heaven, that I have sinned, in thought, word and deed, through my fault, my own fault, my own most grievous fault: wherefore I pray Almighty God to have mercy upon me, to forgive me all my sins, and to make clean my heart within me."

When men and nations persist in sin and avoid confession, they become self-righteous and Pharisaic. They insist in living in illusions about themselves, i.e., in living a lie, in an insistence that their private fictions are public realities. We have a world today passionately devoted to its fictions.

So deeply ingrained is this will to fiction that several friends who are monetary and market economists regularly find themselves rebuked for stating carefully documented facts: they are told, "It's people like you who create economic disasters by talking as you do." In some countries, it is now a criminal offense to cite the crime rate of any particular ethnic group, even though true. It is called racism to do so. Supposedly, if we ignore a group's sins, they will be better people, and so shall we! This is the will to fiction. It is the belief that the rational is the real; or, in Kant's terms, the real world, the "objective" world, is in our minds, not out there. Thinking will make it so, supposedly. Is this not really insanity?

There is a great chain of people involved in Kantian and Hegelian thinking. Marx was their intellectual heir; so too was John Dewey, and all political parties from the left to right are infected by Hegelian thought. Our intellectuals, our schools, pulpits, and media echo such thinking all too often. It undergirds antinomianism, because antinomianism finds the idea of God's law, "out there" governing us all, to be anathema. For Hegel, it is the spirit in the universe and man which is the source of all evolving truth.

If we do not take the fall of man and original sin seriously, we will believe that some group of invisible rulers is responsible for our problems. We will then become good Pharisees, denouncing evil in someone else. If we believe in the fall and man's original sin, his will to be his own god (Gen. 3:5), then we identify, the real problem, and we see its locale: in all of us, We know the remedy, Jesus Christ, and we know that His will must be done, so that His Kingdom may come. That will of the Lord is set forth in every word of the Bible. That book tells us, "Thou art the man," but it gives us the power to work, as God's new creation, to overcome the powers of darkness.

We are the invisible rulers who will not rule. We find it much easier to blame others.