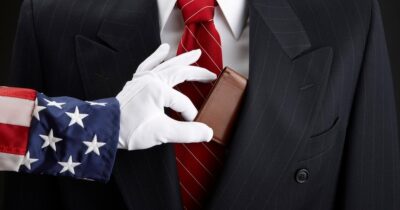 In Matthew 22:15–22, we read of a challenge to our Lord to give grounds to justify a tax revolt. In view of the fact that this episode is sometimes cited by contemporary tax-revolt advocates, it is important to examine it closely to see what its meaning is.

We are told that its purpose was to “entangle” Jesus, i.e., to place Him in an intolerable predicament. Paying taxes to Caesar, a foreign ruler, was highly unpopular with many; to deny the validity of a tax revolt would cost Jesus, the Pharisees reasoned, popular support. The populace in disgust would regard Him as an appeaser, an ally of an unpopular and hated regime. However, to favor the tax revolt would invite reprisals against Jesus by Roman authorities. The question, then, was carefully designed to be deadly in its consequences to Jesus, and it was asked with flattering guile, asking Him to tell the truth without fear of consequenc­es: “Master, we know that thou art true, and teachest the way of God in truth, neither carest thou for any man: for thou regardest not the person of men. Tell us therefore, What thinkest thou? Is it lawful to give trib­ute unto Caesar, or not?” (Matt. 22:16–17). Jesus, after condemning the Pharisees as hypocrites, went directly to the heart of the matter. To un­derstand His answer, we must appreciate the distinction made then and now by tax-revolt advocates. They were not anarchists. They were ready to pay taxes to a legitimate civil government, but not to an illegal one, i.e., one illegal in their eyes. Similarly, contemporary tax-revolt advocates are able to document at length the unconstitutional aspects of the federal government of the United States and to give a lengthy analysis of legal justification for denying taxes to an unconstitutional regime.

The distinction made by the Judeans then was one which we still have with us in Latin form, common to our dictionaries now as good English. It is the distinction between a de facto civil government and a de jure one. A de jure civil government is one which rules rightfully and legally, by right of law; modern Americans would say that it is truly constitutional civil government. A de facto order is one which actually exists and is in command and is not necessarily or at all legal. Thus, to cite an extreme case, the communist rule over Poland is a de facto one, not de jure. Rome was an outsider in Palestine, a foreign invader and conqueror; its rule was plainly de facto. Although Rome was trying to give good administration and to win over the people to its rule, its rule was all the same de facto, not de jure, and there were many among the Jews who argued that taxes paid to a de facto ruler were not legal and hence should not be paid. Hence the framing of the question in terms of the tax-revolt theory of the day: “Is it lawful to give tribute unto Caesar, or not?” The argument was that it was an unlawful tax. The reasoning was identical with what we encounter today. The de jure argument is used, by the way, by radicals and conservatives alike. It is an easy argument. History is so rife with il­legality and evil, that there is little that cannot be nullified by an appeal to a de jure argument. One man once argued with me that, because white Americans had not legal title to America but seized it from the Indians, the Indians should be compensated at current value for it. I pointed out, first, that the current value was a product of the white settler’s work, and, second, the Indians themselves had seized the continent and killed off entirely a previous dweller, a pygmy people. Should we throw out both Indian and white, and locate pygmies to compensate, or to use to resettle America? Such arguments end in absurdity, and they begin by idolizing or deifying a particular model as the de jure factor. I believe that I regard the U.S. Constitution with equal or more respect than the tax-revolt ad­vocates, but its framing was a de facto act. The so-called Constitutional Convention had no authority given to it to frame a constitution. Should we therefore call for its abolition until a de jure status can be given it?

Our Lord’s answer was unequivocally grounded on the de facto as­pect: “Shew me the tribute money. And they brought him a penny. And he saith unto them, Whose is this image and superscription? They say unto him, Caesar’s. Then saith he unto them, Render therefore unto Caesar the things which are Caesar’s; and unto God the things that are God’s” (Matt. 22:19–21). Caesar was the de facto ruler; he provided the coinage, the military protection, the courts, the civil government, and the basic civil authority. This de facto status was a reality which could not be ignored. They were duty bound, not only by Caesar’s demands, but by Christ’s, to render to Caesar the things which by a de facto state belonged to Caesar. A de jure argument can be used to deny virtually all authority, civil, parental, religious, vocational, etc., in a fallen world. A fallen world is itself a de facto world, not a de jure world; it is the reality, but it is not a lawful reality.

Does this mean that we content ourselves with evil? Do we relax and accept all things as inevitably de facto in a fallen world, and therefore beyond remedy? Far from it: what our Lord ruled out was the tax revolt, revolution as the way, rather than regeneration. Sinful man cannot create a truly de jure state; he is by nature doomed to go from one de facto evil to another.

The key is to “render unto God the things that are God’s.” We render ourselves, our homes, our schools, churches, states, vocations, all things to God. We make Biblical law our standard, and we recognize in all things the primacy of regeneration. Only as man, by the atoning blood of Jesus Christ, is made de jure, made right in his relationship to God by God’s law of justice, can man, guided by God’s law, begin to create a de jure society.

A tax revolt is exactly what Karl Marx in 1848 hoped it would be: a short-cut to anarchy and therefore revolution. In his articles of November 12, 1848, “We Refuse to Pay Taxes”; on November 17, 1848, “The Min­istry Under Indictment”; and November 17, 1848, “No More Taxes,” he called upon Germans to break the state by refusing to pay taxes (see Saul K. Padover, ed. and trans., Karl Marx Library, vol. 1, On Revolution [New York, NY: McGraw-Hill, 1971], pp. 452–455). While much earlier he had argued against the legality of taxation without proper represen­tation, on December 9, 1848, he said plainly, “Our ground is not the ground of legality; it is the ground of revolution” (ibid., p. 456, “The Bourgeoisie and the Counterrevolution”). Marx believed, as Gary North has shown in Marx’s Religion of Revolution, in the regenerating power of chaos, anarchy, and revolution.

Those who render unto God the things which are God’s believe rather in regeneration through Jesus Christ and the reconstruction of all things in terms of God’s law. In such a perspective, a tax revolt is a futile thing, a dead end, and a departure from Biblical requirements.