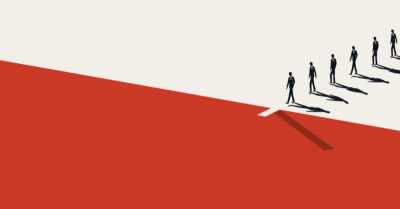 Many of you will remember the heady feeling of the West when the Soviet Union dissolved in 1991. With no Cold War, and the United States “the world’s only superpower,” there was, briefly, very optimistic talk of a bright future ahead. Within a decade, however, the 9-11 attacks had shattered that optimism and it became obvious that new problems had merely replaced the old. The “dot-com” bubble and later the subprime mortgage/derivative bubbles burst. Three recessions have come and gone since we assumed the future looked so promising. We seem to lurch from one crisis to another. It comes from man playing god.

As Christians we accept the Bible’s analysis of man’s problem being his sin. All sin repeats the attempt of Adam and Eve to make good on Satan’s con that they could “be as gods knowing good and evil” (Gen. 3:5). Gods do not “know” good and evil intellectually, they determine it. This was Satan’s temptation to Adam and Eve. Their overt disobedience was eating the forbidden fruit, but the prior spiritual rebellion was that desire to play god, to assume His prerogative of defining good and evil.

Christian thought assumes a cosmic organizational chart that has God at the head and man and his world below. Whenever the authority of God and His Word is denied, whether in theory or in practice, the headship of that organizational chart necessarily becomes occupied by man in some way. We then have men illegitimately assuming the power that rightfully belongs to God alone. That, in a nutshell, is the blasphemy of humanism.

Man is a creature of God and cannot transcend this reality, which is why Scripture reminds us repeatedly of what has been called the Creator-creature distinction. When we blur that line by acting like gods, by assuming the authority of God, we do not become god-like; we are only creatures making a mess of all we touch. Adam and Eve accomplished nothing positive by playing god; the lesson of Genesis 3 is that their course led to every misery known to mankind.

Have you ever wished you could intervene and stop one person or movement in order to make the world better? The disciples did. When the city of Samaria insulted Jesus they asked the Lord if they might call down from heaven destruction on the city (Luke 9:52–56). Jesus responded that His purpose transcended the understandable indignation of the twelve or the sin of the Samaritans. His purpose was to save.

Some years ago, there was a popular series of comedic movies called Back to the Future. They were about time travel, and the plot centered on the danger of changing one thing in history because the ripple effect would result in changing many things thereafter. It is that way when you try to play God. You cannot pick and choose specific acts of sovereignty; in order to really control like God, you must control everything. If you want power to change things at will, you need more than a few wishes, you need sovereignty. This is the realization of those that play at being gods. Unfortunately, it seldom humbles them into backing away from their presumption; it tends to make them hoard more power so they can control more. They become blinded by raw power, confusing it with authority because their cosmic organizational model has eliminated God, or at least reduced Him to a subservient role. When men assume sovereignty, they must reduce God to a role-player. When men believe they are in charge, then every problem is seen as requiring their intervention. “Something must be done.”

Because sin is, in its original and subsequent manifestations, the desire to “be as gods,” sinful men have been given commandments by God that limit their action. They are moral limitations, barriers we must not cross because we tend to play at being gods. Jesus made clear that these boundaries must be extended to include our thoughts and attitudes as well (Matt. 5:19–37). These boundary markers often begin with “Thou shalt not …” Just as most men were barred from the inner sanctums of the temple, we are given a boundary to our spheres of action. They are a divine command to “Stop right there.” Observing these limits keeps us from playing at being “gods knowing good and evil.”

Much harm comes from trespassing beyond God’s moral boundaries. The “pessimistic” view of man that the humanist belittles in the Calvinist is this perspective that man’s fundamental problem is a moral one. It is an offensive position to humanists. In college I took an ancient history course at a state university. It was an intensive summer course and the classes lasted for several hours each day. On the first day of class the first words of the professor asked a question— “Do you think man is basically good or evil?” When nobody spoke up, he pointed at me for an answer. Thereafter, for the duration of the course, no one wanted to agree with any statement I made because they could see I was speaking to a moral dimension they refused to acknowledge as relevant.

The harm men cause when they violate the boundaries of God’s law is systemic. It can be personal, but such evils create psychological, emotional, and economic results that become social. Community is based on a communion of faith that shares a fundamental, common understanding of right and wrong. These religious assumptions form the basis of laws, norms, culture, and civilization. Will it be sin or righteousness that is institutionalized in the fabric of our culture? I remember as a teenager being told people with nothing in common could not easily discuss anything except sports and weather, but even sports has now created a tribal loyalty that makes its discussion more fruitful of argument than small talk. We have no community because, increasingly, we have fundamental conflicts.

When groups or organizations fail to abide by God’s boundaries, they also play at being god-like, yet with increased influence their harm is not only more extensive in influence but becomes institutionalized. This is true in churches, the state, corporations and private groups.

The Problem Is Illegitimate Power

When Adam and Eve acted, they exercised an illegitimate assumption of power that caused great harm. It manifested itself in individuals and groups. Cain murdered his brother. His son “built a city” and within five generations a well-developed culture existed, complete with animal husbandry, music, and metallurgy, yet Lamech then bragged of his murder and threatened brutal retaliation on any who would avenge his actions (Gen. 4:16–24). The sin became systemic in the culture.

Man is not sovereign because he is a pretender on the throne of God. In high school I had a friend with a clearly Hispanic surname. When people asked his ethnicity, he replied that he was an Indian. When asked what kind of Indian he was, he would proudly declare himself to be a “Pseudo Indian.”

Man’s assumption of God’s prerogatives is also a sham, but it is no joke; it causes very real harm. Because man cannot be sovereign, his defiance of moral limitations only ends up expanding the realm of sin and death. And so, we lurch from crisis to crisis.

We have built a Tower of Babel in one area after another. After the recession of 2008 almost took down the world banking system, many articles were written on potential triggers of another financial meltdown that could precipitate such an outcome. Many of these were not written from a hard money perspective, but they admitted to the fragility of our fiat money and debt structure. Unfortunately, most of these articles took such fragility as a normal consequence of modern economies. This lack of awareness of the consequences of our violation of God’s commandments is a very real part of the mess we are in. Many will be blindsided when the follies of our economy are revealed.

As tenuous as our economy is, we were blindsided by a virus, much like Herod Agrippa was struck down when he least expected it (Acts 12:1–23) or 185,000 Assyrians preparing to besiege Jerusalem (2 Kings 19:35).

Was COVID-19 created as a weapon? Was the reaction to it out of proportion to the threat? Was that reaction an opportunistic power grab? We will very likely never be able to prove any answers we might propose to these questions, but what we do know is that our institutions, our social order itself, is a house built upon sand. We do know that the systematic sin of the past and present have made a multidimensional mess of things. When evil is so inter-twined at so many levels, reform seems less likely than a collapse and a total reconstruction. The seeming prosperity of evil doers is always precarious and never permanent.

The unseen and unpredictable factor is the miraculous moving of the Holy Spirit. As Christendom grew there was a very long trend toward limiting the power of men. It is entirely likely the growth of unbelief and humanistic statism is a temporary apostasy the Holy Spirit will reverse by an incredible spurt of growth in the Kingdom. The work of the Spirit in history is as efficacious as it is in regeneration. When the Spirit moves, change will take place. This was and is the meaning of Pentecost. The Spirit’s work in history is described in Hebrews 12:26–27 as a “shaking” of the earth so “that those things which cannot be shaken may remain.” The prophets referred to such times as “the day of the Lord,” when God stops the folly of men and redirects history. Until that happens, we are just hanging on, lurching between one or another crisis, destroying ourselves by trying to “be as gods,” yet, like always, making a mess of everything we touch.

It will not last. In God’s timing, His Kingdom will advance and overcome: “I will work a work in your days, which ye will not believe, though it be told you” (Hab. 1:5).

Taken from the May 2020 issue of our bi-monthly Arise & Build printed newsletter. Receive your subscription to this newsletter along with our bi-monthly Chalcedon Report all for just $20/year. Click now to subscribe.