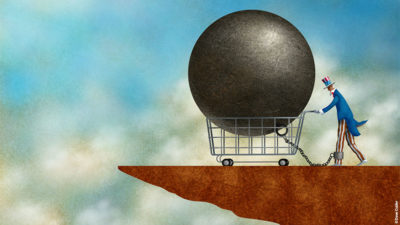 Julius Goebel Jr., in Felony and Misdemeanor: A Study in the History of Criminal Law (1937, 1976), analyzes carefully what happened in the medieval era as church and state took over jurisdiction from kinship groups. The state in particular increased its powers substantially. Goebel’s concern was a study of the development of laws. In describing the Carolingian system after the Charlemagne, he sums up what happened in a devastating sentence: “The objective is no longer peace and order; it is primarily fiscal” (p. 133). In other words, the state no longer saw the protection of the people from war and lawlessness as its main reason for existence: its reason for being became taxation, shearing sheep.

Whenever the state gains great powers, its own existence becomes its goal, and the people then are primarily the source of money, not an asset to be guarded. Civil governments, as they grow in power, grow in their distance from the people. One young man, a scientist in an important arm of the state, told me that 85 percent of all the personnel in that bureaucracy regard the people as the enemy. Instead of being a people to be defended, the state sees its people as the enemy. Instead of seeing the only division among the citizenry as the one between the lawless and the law abiding, the state rules by creating division. The rich, the middle class, and the poor are set one against the other; farmers, manufacturers, and workers are seen as hostile groups, and various racial minorities are encouraged to seek their “rights.” A divided people makes possible a strong state.

A national budget is a modern device whose purpose is to appropriate non-existing funds. A state does not tax and then, with funds in hand, decide how to spend the money. Rather, the various state agencies submit their ever-increasing demands, and a budget is drafted in terms of these expectations. If the revenues then fail to meet these enacted demands, then borrowing, via bonds, usually makes up the difference. This means a growing national debt.

The absurdity of this routine process can be understood if we apply it to ourselves. Can we begin the new year by stating that we “need” so much money during the next twelve months? Can we then proceed to spend in terms of that supposedly “need” budget? Can we shift the resulting debt on to our relatives and neighbors? If we cannot do it, why can the federal government?

It should be apparent that the handling of money is a moral fact, and we are surrounded by peoples and civil governments who are moral failures. How we plan the use of our money, as persons and nations, will determine whether we are living morally or immorally. Our lives and our nations should be dedicated to furthering a moral order, but we are in fact creating an immoral order. We can then, in anger, demonstrate, riot, and kill, but we are part of that immoral order. James 2:10 tells us that to break God’s law at one point is to be guilty of all: a chain is broken; a law order is destroyed.

Men and nations can budget in terms of money they have, or money they want to have. The difference is between virtue and sin. Obviously, sin is more popular than ever in our time. Carolyn Webber and Aaron Wildavsky, in their History of Taxation and Expenditure in the Western World (1986), point out that “[m]odern budgeting is allocation plus control” (p. 77). When wisely and morally done, it is an exercise in self-control. When immorally done, it is a means of controlling others. State inflation controls us by over-taxation, and by inflation, which robs us by reducing the value of our income, among other things. Neither men nor nations are nowadays given to self-control.

The modern power state, according to Webber and Wildavsky, is a product of Enlightenment rationalism, and “rationality in government means centralization” (p. 317). Reason synthesizes, and, where divorced from Biblical norms, it centralizes. It also rationalizes theft. In 1908, Lloyd George still reflected enough moral order to call his tax plan theft, saying, “I have got to rob somebody’s hen roost next year. I am on the look-out which will be the easiest to get and where I shall be least punished, and where shall I get the most eggs” (p. 315). To make such theft appealing, the state on varying occasions appeals to various special interest groups to take part in the theft by receiving some of the loot. The people are made part of the looters’ league, and their moral indignation is thereby undermined. The expanding role of the state is the result. The modern state exists to tax and to control more than to provide peace and order. The harmony of society has disappeared or is disappearing.

We cannot expect the state to control its taxation and the increase of its national debt when we do not exercise fiscal self-control. Immoral states are the expression of immoral peoples.

“We, the people,” are dedicated to long-term debt in violation of God’s law. Debt-living is the American way of life. We are dedicated to non-tithing, and we expect God’s blessing for refusing to pay His tax. Our prayers are given to complaining (we need so much) rather than to praise. We are “a mess,” and we wonder at the mess the world is in.