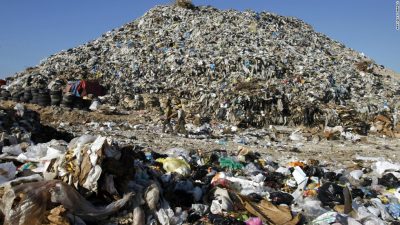 In 1943, a novel, bitterly fought against by Western pro-communists, saw the crisis of civilization in the fact that its first faith, Christianity, was virtually gone, and the second, free thought or humanism, was also fading. “Nothing exists that can fill the chasm: there is no third faith!” wrote Mark Aldanov in The Fifth Seal. His character, Vermandois, ob­served, “Humanity is marching toward a dumping ground.” Men could resign themselves to it, or choose a fairy tale pleasing to themselves and use it to proclaim “that the dumping ground is in reality a crystal pal­ace.” In any case, the future meant the dumping ground.

Now a dumping ground, like every trash pile, has a characteristic feature: nothing has any relationship to anything around it. Things are simply dumped there, whether worthless or still usable, without any rule or any meaningful relationship to things next to them. Philosophically speaking, we can say that every dumping ground or trash pile gives us an excellent example of existentialism. Nothing derives meaning or sig­nificance from anything around it. There are no rules governing relation­ships or imposing an order. There is no philosophy governing all the facts in the dump. Each piece of junk must develop its own philosophy of existence or else have none.

A plain-spoken expression of this philosophy came to light in 1975 through a follower of Charles Manson. Lynette “Squeaky” Fromme, the twenty-seven-year-old girl who tried to assassinate President Ford, de­clared to her captors, “If you have no philosophy, you don’t have any rules.” By philosophy, Lynette Fromme meant a faith which prescribes rules binding on all people, a universal morality and law. Existentialism is a philosophy which denies this emphatically, and existentialism, whether held formally or informally, is the refining faith of the twentieth century.

In Defiance #1: A Radical Review (1970), one of the key declarations was simply this: “Good News! 2 and 2 no longer make 4.” The revolu­tion, one writer held, had already occurred. He was right, of course. The principles of relativism, of existentialism, i.e., the philosophies of the dumping ground, have triumphed. When I cite the Defiance gospel to some, they are shocked: 2 and 2 do make 4, they insist. However, when pressed about God’s law, it is clear that they are existentialists about everything except a few practical items like arithmetic. Most twentieth-century men are to some degree existentialists; they object only when younger existentialists go a little further than they themselves are pre­pared to go.

The dumping-ground future predicted by Aldanov’s Vermandois is increasingly apparent to more and more intellectuals and youths. Their answer is to look for that third faith. Hence the deep interest in Orien­tal religions, primitive faiths, magic, witchcraft, occultism, and much else. On all fronts, the religious interest is intense, but it is futile. All the “new” third faiths are simply variations on a common theme, humanism. I know very casually one such seeker, a brilliant and attractive woman, who regularly finds the great answer in some new form of this old faith, and then, before finding another, is suicidally pessimistic. For her, the one alternative never to be considered in her quest is Biblical faith. Not surprisingly, each new collapse drives her closer to suicide, to her own dumping ground.

Now, more than once civilization has turned itself into a dump heap by its adoption of some form of moral relativism, although never so dras­tically as in the twentieth century. There is a common consequence to every such event in history. Our Lord expressed it thus: “For wheresoever the carcass is, there will the eagles be gathered together” (Matt. 24:28). When civilization turns itself into a garbage dump, there the vultures will gather, and then too the vulture nations have an opportunity to gain ascendancy.

Certainly in our time, men seem determined to turn history into a dumping ground, and the vultures are not lacking on the scene. The sec­ond faith, humanism, is morally bankrupt: existentialism is simply its logical conclusion. There is no third faith, and there is too little left of the first faith to be a factor in the minds of vultures. The churches have virtually all succumbed to the influences of the second faith, human­ism. But the first faith, Christianity, alone offers hope. Humanism has failed, because it has been applied and developed. Christianity has not failed; rather, it has been abandoned for humanism disguised sometimes as Christianity.

If the dumping ground and the vultures, both products of humanism, are to be avoided, it will only be in terms of Biblical faith. Existentialism can only destroy and negate: it must deny all meanings and relationships in order to affirm the autonomy and the ultimacy of humanistic man. Dotson Rader, writing also in Defiance, stated it clearly: “to destroy all limits is, in a perverse sense, to be truly free. To destroy is to feel free.”

Reconstruction is only possible on radically alien terms, terms which make basic not man’s feelings or experience, but God’s atonement and God’s law. Churchmen who deny the validity of God’s law are humanists: they make man’s feelings and experience basic to the faith rather than Christ’s work and man’s required response of faith and obedience.

The only way that the vultures can be exorcised from civilization is by the road away from the dumping ground, from humanism or existential­ism, to a full-orbed and militant Biblical faith.

Existentialist man can never be dominion man on his own terms. He has no world except himself, no meaning except his will, and no arena of operation except a vacuum. The will of existentialist man is to be god, but even Sartre, the foremost existentialist, saw this goal and man him­self as a “futile passion.”

Godly reconstruction by dominion man has as its instrument Biblical law, God’s plan of conquest. It provides for the reordering of every area of life in terms of God’s sovereign word and purpose, and for the estab­lishment of man as king, priest, and prophet in Christ over the earth.

Man has a “choice”: to be a pretended god and sovereign on a dump heap, surrounded by waiting vultures, or a dominion man in Christ over the earth. In either case, there is only one sovereign, God. That can never change: it is man who must.