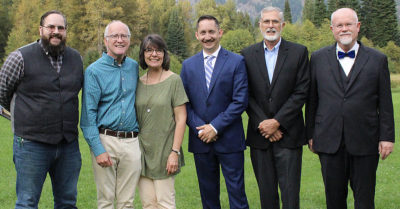 The Pacific Northwest Christian Reconstruction Symposium had a successful second event September 6-8, 2019, in Leavenworth, Washington. The symposium is structured as a family conference and is held at the Tall Timber Outdoor Retreat Center in the Cascade Mountains. The symposium was set in motion by Reconstruction Life (reconstructionlife.com), spearheaded by retired Navy pilot Joseph M. Graham. Last year’s event, held in June of 2018, focused on the topic of Christian Reconstruction, Family Business, and Dominion: Reconstructing our Lives, Families, and Assets toward Godly Dominion and Generational Stability in the Marketplace. Readers may recall that Mark Rushdoony was one of the speakers back then, alongside Tim Yarbrough, Michael Kloss, Joseph Graham, Daniel Stachofsky, and Susan Eby. The three tracks in 2018 were Introduction to Christian Reconstruction, Family Business, and Women of Virtue.

The 2019 symposium dealt with Christian Reconstruction, Biblical Law, and Christian Education. Returning speakers were Mark Rushdoony, Joseph Graham, Michael Kloss, and Susan Eby. New to the roster for 2019 were Martin Selbrede and Daniel Eby. The three tracks in 2019 were Introduction to Biblical Law, Biblical Law, and Christian Education, which were covered both in keynote sessions (where all attendees were present) and breakout sessions (where two simultaneous workshops are presented, focusing on the nuts and bolts of a specific topic of interest).

The format of a PNW Reconstruction Symposium is carefully structured to permit both theory and practice/application to be taught in a compelling way. The organizers, in their own words, want to create “an opportunity for Christians to learn about the principles and applications of the faith for all of life.” Neither aspect—theory or practice—are slacked (nor should they be). Both elements receive the attention necessary for the conference to reach the goals the organizers have specifically targeted. Credit for this foundation-building emphasis goes to Joseph Graham, Daniel Eby (who edited the printed symposium proceedings that were actually printed in advance of the event), and Jason Diffner.

No surprise, then, that the Chalcedon Foundation was willing to participate in the symposium again in 2019. When faithful men of vision undertake a work in their midst for the Kingdom of God, God will be intimately present in the work (Zechariah 4:10). Such decentralized events, sponsored by local Christians who recognize Christ as King, Judge, Lawgiver, and Savior (Isaiah 33:22), need to multiply over the face of the nation. You can’t have a second symposium or conference until you’ve had the first, and it takes some courage of faith to begin a work on this order. “Wisdom is justified of her children” (Matthew 11:19).

The organizers desire to introduce Christians to the principles of Christian Reconstruction, which involves clearing the air of misconceptions (no small thing given the “evil reports” that continue to circulate against it) and establishing sound foundations. In this second annual symposium, the emphasis upon Biblical law and education served to put legs on that general mandate. Each speaker brought their own perspectives to bear on their assigned topics, providing wide-ranging expositions of Biblical truth that were nonetheless unified at the foundational level. Attendees came to realize the truth behind King David’s assertion that “Thy commandment is exceeding broad” (Psalm 119:96b).

Consequently, this symposium was a good fit for those who were new to the ideas being taught, as well as to seasoned spiritual warriors. The thought and care that went into each presentation was likely a direct consequence of the fact that the speakers had to submit essays covering their lecture topics a couple of months in advance of the symposium—essays to be printed as set of symposium proceedings available for attendees to acquire upon arrival. Such an approach to these events is actually quite far-sighted: the reach of the symposium can be far beyond the guest list at the facility, because the content has been reduced to an easily-readable printed format. The job of the speakers, then, is to make their essays come to life—to be engaging while covering that ground in a structured way. Purchasing a copy of the proceedings—the printed symposium, as it were—is the next best thing to being there.

Many professional organizations print their conference proceedings, and those with the highest standards often strive to do so prior to their actual conference. The first PNW Reconstruction Symposium in 2018 published its proceedings after the event, but this second symposium had its printed books displayed on the book table as attendees came into the central hall to register for the event. Now there are two printed books available for purchase that allow the reader to retrace the teaching presented at the event. Both Mark Rushdoony and Martin Selbrede had written three comprehensive essays each for the 2019 book (which constitute approximately one-half of the book).

More importantly, other speakers were carrying the ball into the end zone in their own unique ways. Pastor Michael Kloss, one of the more down-to-earth Reconstructionists who is both an insightful and entertaining speaker, understood how to get important Reconstructionist ideas across while connecting with his audiences. Joseph Graham brought directness and intensity to his presentations because he sees the big picture and understands what that requires of each of us (as evidenced so clearly by his detailed discussion of the Fifth Commandment). Daniel and Susan Eby have long-standing experience in Christian education, quoting from the works of R. J. Rushdoony and other notable Christian educators as the occasion warranted.

If God in His wisdom should give the increase to this effort, we can expect to not only see additional conferences on newer topics, but to see the number of printed symposiums grow on the shelf. In this way, the Pacific Northwest Reconstruction Symposium is building a legacy for future generations, for these volumes will continue to conquer ground for Christ for those who were out of earshot of the speakers when the talks were in session up in the mountains. These published proceedings amount to “tablets” being brought down the mountain, Christian speaking to fellow Christian, mirroring the “sons of Issachar” who understood the signs of the times and what Israel ought to do (1 Chron. 12:32).

True, we live in an era where all the action is supposedly on the internet, and even some first-generation Reconstructionists take a dim view of anyone afflicted with Picard’s syndrome (an appetite for a physical, printed book). Joseph Graham and his cobelligerents march to a different drummer, however: they’re in this for the long haul. In the ephemeral world of social media, the lifespan of an idea can be shorter than the life of a mayfly. By putting a stake in the ground and committing to the written word to extend the life and reach of each speaker’s message, Reconstruction Life is swinging for the fences. They know who their intended audience is.

Of course, the fellowship and detailed discussions (one-on-one and small group chats at meals and elsewhere) which take place beyond the scope of the formal talks cannot be replicated in a book—and especially not in a book whose chapters were written months before guests arrived at the symposium site. Notably, after the last talk on Saturday night, September 7, the organizers arranged for an impromptu question-and-answer session with both Mark and Martin, who were placed on the hot seat in the front of the hall. This permitted attendees to dig deeper and resolve outstanding issues with the two Chalcedon principals. While unstructured and informal, that didn’t make the Q&A session any less edifying. Early on, Joseph Graham made it clear that he wanted the speakers to make themselves accessible to the attendees (it is one of the appeals of the symposium that draws people to attend it) and this Q&A was hit upon as a good way to extend that accessibility even further.

In Numbers 11, Moses is alerted to two men, Eldad and Medad, prophesying well beyond the institutional boundaries that were supposedly established for such action. Far from objecting that God was apparently raising up a work elsewhere in the camp, Moses replies, “Enviest thou for my sake? would God that all the Lord’s people were prophets, and that the Lord would put his spirit upon them!” In that same spirit, Chalcedon rejoices that other men and women are taking up the mantle and burden of the whole counsel of God, and running with it. Our mission is always to seek first the Kingdom of God, and to encourage its growth and extension without respect of persons or institutions or names. May the Lord raise up more men across the country that want to replicate the kind of things being done in the Pacific Northwest. Christian Reconstruction must not be a candle hid under a bushel, but needs to become a spreading flame, with like-minded men taking up the cause for Biblical truth without compromise. May it ever be so.

Taken from the October 2019 issue of our bi-monthly Chalcedon Report.Click now to subscribe.