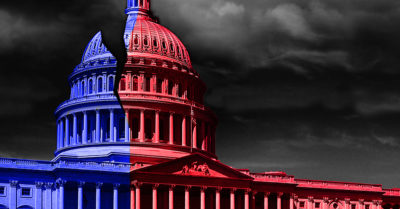 While recently re-reading Dr. Rushdoony’s Salvation and Godly Rule,1 I was stunned at how often he ruled out political solutions to our current problems. Political solutions merely inject more poison into our culture because our problems aren’t political, they’re moral. Yet we remain awash in hucksters promoting one political solution after another to “save” our nation. Far too many of these promoters claim to be Christians, even Christian leaders, whose rhetoric hides the fact that they’re leading their disciples into the ditch with them.

It is worth our time to tease out these truths, to pop the hood on political posturing (both ancient and modern) to see it for what it truly is: a laundry list of expedients to further man’s rebellion against His Creator, Lawgiver, Judge, King, and Savior.

Addicted to Hair of the Dog Solutions

When I wrote about our nation’s addiction crisis and the moving of the ancient landmark of sobriety to the lofty-sounding goal of harm reduction (see my eighteen articles on Chalcedon’s website concerning Massachusetts physician Punyamurtula S. Kishore), I noted that hair of the dog solutions are currently the “gold standard” for treatment (albeit fool’s gold in this case). Opioid addiction is actually being “treated” with more opioids. This is madness. The end result is predictable despite being covered up by political misdirection and data laundering.

Does your economic system have problems due to governmental injection of funny money (fiat currency, debt monetization, fractional reserve banking, etc.)? The solution is always more funny money: add more sins to cover up the effect of earlier sins. Rob Peter to pay Paul only “works” until Peter becomes broke. Economic problems aren’t rolled back by hair of the dog solutions: they only cause malinvestment to persist and worsen. Each new evasion of responsibility worsens the impact of the adjustments yet to come. We consume away our own future.

As Dr. Rushdoony said concerning the proverb let us eat, drink, and be merry, for tomorrow we die, its lesson is simple.

The economics of this proverb was an economy geared to quick consumption without concern for the future, and this meant the erosion of tomorrow … It means an economy, in Roepke’s words, in which it is “a virtue to contract debts and … foolishness to save.”2

A man, when free from the corruption of modern humanism, will work in terms of God’s calling, and, under God, for his family, for the personal realization of his abilities, and more. These are essentially non-economic motives. Economies self-destruct when their motivating forces become essentially economic.3

Solomon foresaw this issue in Ecclesiastes 5:10 when he taught us that “an appetite for silver cannot be satisfied with silver.” Economic issues cannot be solved through economics, because the root of economic problems is ethical and moral, not economic.

Power Is the Hair of the Political Dog

When the state usurps the function of savior over society, it begins to trade in the currency of power.

Man seeks salvation in power. As against the hovering demons of darkness and death, he has no protection except a fleeting assertion of power. Thus, every age of unbelief is also an era of power politics, tyranny, and brutal death.4

The inevitable failures that arise when political solutions to our problems are devised and implemented (see Eccl. 7:29) involve what Jeremiah called “healing the wound of the people lightly,” i.e., political quackery (Jer. 6:14 and 8:11). As Rushdoony points out about these perpetual political crusades,

Every major effort has led to a costly failure. The failures are not surprising and are indeed inescapable. The efforts have been political, and their essential nature has been like Horace’s hope. For these political efforts, salvation is not a new man, but a new beginning for man, not a change in man but a change in his politics.5

Predestination, like infallibility, is then transferred from God to man: statist man needs to exert control to insure that the promised salvation arrives on schedule. Things quickly go downhill from there:

This arises as a result of the nature of political solutions as embodiments of humanistic predestination:

When an agency within creation claims absolute powers, it must of necessity suppress and enslave all other agencies. For a second cause to claim to be the first cause means that it must war against all other second causes.7

When hell disappears from religion, it re-appears in politics and social morality. It becomes necessary then for ultimate moral judgments and dispositions to be made on earth, because there is no other court for a final reckoning.8

Such “ultimate moral judgments” now include boycotting individuals holding unacceptable views to the point (at least in principle) of starving them to death. Humanistic “justice” is a harsh, self-righteous mistress.

The hard realities of politics rest on the moral order of the people. Without that moral order, every politics becomes a politics of disintegration.9

Political solutions, by their very nature, restrict human liberty because they involve imposition of control, and such control is justified because of the underlying statist doctrine of man.

When men are seen as instruments of the state, they are very readily used, because it is the function of an instrument to be used.10

In all these things, man (through ostentatious words and actions) creates the illusion of dealing with societal problems forthrightly, but that blur of activity is a façade to hide the true problem from sight.

By failing to recognize his rebellion against the sovereign God as his essential problem as well as his sin, pagan man wants not salvation but escape. To admit the real problem, his sin, is to admit that there is no way of escape, only the way of salvation through God’s regenerating grace. Moreover, the failure of paganism to offer salvation is not accidental. It is a part of the pagan refusal to understand; it is a willful rejection of the truth of God.11

Therefore, since the root cause of man’s problem cannot be resolved through politics, politics not only doesn’t resolve the issue, it exacerbates it in the same way that inaction allows a tumor to grow larger and more dangerous:

[When] the problem of sin is not dealt with … it remains, to create problems afresh on another occasion.12

Amputating the left leg when the metastasizing tumor is on one’s right leg is worse than doing nothing. Further, to repeat the same steps over and over while expecting a different result is conventionally deemed to be insanity. The Bible uses the word madness to describe this pathology.

Madness in Their Hearts

Solomon gave an unremittingly honest description of himself and his fellow man:

The heart of the sons of men is full of evil, and madness is in their heart while they live. (Eccl. 9:3)

It is this madness that politics ancient and modern is unable to heal: in fact, when politics seeks to institutionalize the rejection of God’s covenant, the madness in man only increases. The curses for violation of God’s law in Deuteronomy 28 list our modern symptoms as covenantal sanctions being inflicted upon us for our thoughts and actions.

The Lord shall smite thee with madness, and blindness, and astonishment of heart: And thou shalt grope at noonday, as the blind gropeth in darkness, and thou shalt not prosper in thy ways: and thou shalt be only oppressed and spoiled evermore, and no man shall save thee. (Deut. 28:28-29)

The last phrase is significant: despite statist man’s politics promising to save us, God assures the rebellious that “no man shall save thee.” Political candidates outshout each other that their plan and program will save us, but God says not a single one of them can save you. If “no man shall save thee,” then politics clearly can solve nothing. It only worsens our situation because it doesn’t deal with our root problem, it only papers it over.

The political refrain has ever been that “you are being oppressed and spoiled, but I can save thee,” or that “our party can save thee.” God contradicts all this madness: there is no recourse outside of obedience to His law. Only then shall He shall save thee, and not man. “Cease ye from man, whose breath is in his nostrils: of what account is he?” (Isa. 2:22). The politicians give glowing accounts of themselves, and caustic accounts of their competitors, but God says they are beneath contempt and are of no account whatsoever. They are nobodies. As J. A. Alexander says of Isaiah 2:22, God’s final question “forcibly implies that man’s protection cannot be relied upon.”13 Repeat: cannot be relied upon. We should therefore let God be true, and every man a liar (Rom. 3:4).

Fallen man is the creature who wills to be god and therefore to govern and determine all things. By whatever agency he displaces God’s government, man will thereby seek to establish his own ultimacy and absolute government.14

All political solutions proceed on the premise that man is right to “establish his own ultimacy” to displace God’s ultimacy. Because this is God’s universe, these attempts not only fail, they worsen the problems they were intended to solve. Why? Because man’s fundamental problem is his will to be his own ultimate authority, and politics is the arena in which such usurpation of God’s authority plays out most conspicuously, defying Him with a high hand.

Simply put: you cannot solve problems created as a result of breaking His law by breaking His law even more. Problems caused by disobedience aren’t solved by more disobedience. Man likes to think his problems are political or economic (making him a victim) rather than moral (making him a perpetrator). But his rebellious preference doesn’t alter the fact that political problems are merely symptomatic of underlying moral problems. And in politics, gaining symptomatic relief only worsens the underlying moral condition of man. Because man’s problems are moral and not political, political cures are worse than the disease.

There is a way out, but statist man has no interest in it, preferring to rule in hell than serve in heaven. As Rushdoony pointed out,

Man is not frustrated nor constrained because God is God but only when man plays at being god.15

But “men loved darkness rather than light, because their deeds were evil” (John 3:19). Rather than admit that political problems cannot be solved politically, men double down on their rebellion. Against this trend, regenerate men (who will enjoy the covenantal blessings of God) must continue to apply God’s solutions, for healing will not proceed out of the world of statist politics. Healing will spread over the world when it proceeds from “such as keep His covenant, and to those that remember His commandments to do them” (Psalm 103:18).

Taken from the November 2019 issue of our bi-monthly Arise & Build printed newsletter. Receive your subscription to this newsletter along with our bi-monthly Chalcedon Report all for just $20/year. Click now to subscribe.