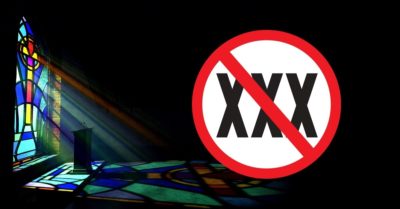 Horrified by the evils of pornography, evangelicals frequently propose that the federal government monitor, control, and regulate the internet. This is asking the same government that defends and promotes sexual perversion to protect us from sexual perversion—absurd! But it is the only solution that a lawless church can envision. This article will seek to show a better way.

There is no question about the fact that pornography has become a crisis in our nation, destroying marriages, harming children, clogging the television networks and internet with filth, and filling our nation with rapists, perverts, and child abusers. But with every crisis there are tyrants ready to “fix” the problem by asking for more control. We need to recognize that the very government offering to fix the problem has been part of the problem by decriminalizing adultery, sexual perversions, and homosexuality.

Rather than using the evidence (pornography) of potential criminal acts as an excuse to control all internet activity, pornography could be used as additional circumstantial evidence to prosecute pornographers who are accused of the crimes of rape,1 incest,2 adultery,3 certain types of fornication,4 and homosexuality.5

Evangelicals rightly recognize that our culture is not ready to follow Biblical law, but they wrongly conclude that we therefore must use statism to solve the problem.

God’s solution is conversion and discipleship, revival and reformation; it is bottom up transformation, not top down force. When we bypass grace, we usually end up leaving the limited civil government that God has ordained and begin to look to the civil government to be our savior. But if Christians across this nation would truly take advantages of the means of grace and the standard of God’s law as sufficient for every problem in life (2 Tim. 3:16–17), we would begin to see culture transformed.

Let us arise and build by laying aside carnal weapons and picking up the mighty weapons given by God (2 Cor. 10:4–6).

(c) 2019 Phillip Kayser. All rights reserved. Published by the Chalcedon Foundation with full permission of the author.

8. There was to be no coerced testimony (even Achan whom God had already tried and convicted was only asked to give a voluntary confession in Josh 7:9-26). The teaching that a person is innocent until proven guilty is only found in Biblical religion. No torture or other methods to extort confessions was allowed. Thus Paul rightly protested when he was treated as guilty until proven innocent (Acts 16:37) and the trial of Christ (as much of a Kangaroo court as it was!) was stymied in their attempt to prove Christ guilty. This however does not mean that a person cannot be condemned when he testifies to his own guilt. See for example 2 Sam. 1:16: “For David had said to him, “Your blood be on your own head. Your own mouth testified against you when you said, ‘I killed the LORD’s anointed.’”

9. The case had to be established with a minimum of two witnesses, and in some situations, three (Deut. 19:15). Perhaps the provision for the optional three witnesses was judicial discretion when there was doubt.

Phillip G. Kayser, PhD. is the author of over 60 books and booklets. For fifteen years Dr. Kayser has been involved in coaching church planters, mentoring seminary students, and teaching seminars on Biblical leadership internationally. Phil is the pastor of Dominion Covenant Church. Many of his books are available for free download at Biblicalblueprints.org.

Book
Noble Savages: Exposing the Worldview of Pornographers and Their War Against Christian Civilization