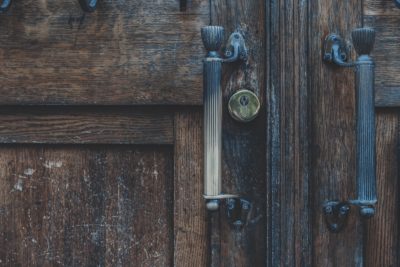 As a result, many people have become unduly concerned about protecting themselves, their activities, their groups, clubs, churches, and communities from fools and knaves. Up to a point, such a concern is necessary, but carried to extremes, it is dangerous. There is no foolproof system for keeping such people out. As long as man is in any group, the potentiality for sin and folly is there. To be unduly concerned about protection can become a sin and folly.

The problem arose in the early church in between persecutions. Many members and pastors, faced with the threat of death from Rome, renounced Christ and His church. The churches split over this issue. Should such people be readmitted, or should the church strengthen its requirements in order to try to eliminate all such people?

Many churches took a strict stand and weeded out all problem people. These churches all perished. They had not eliminated problems, because, as long as one member remained, the potential for sin and folly was there.

Those churches which said that a profession of faith was all that could be required, and that sin and folly would have to be expected and dealt with by church discipline in terms of the Word of God, survived and prospered. They had expected perfection, not from man, but from God, and they concerned themselves more with serving Christ faithfully than with protecting themselves from men.

Both sides truly believed in Christ, and both were agreed on doctrine and Scripture. The question was something else, and the answer of action rather than protection gained God’s blessing.

We can never in this life protect ourselves fully against men, because we ourselves are men. Taking necessary protections against sin and folly is secondary. What we need most to do is to serve God with all our heart, mind, and being. St. Paul said, “Whether therefore ye eat, or drink, or whatsoever ye do, do all to the glory of God” (1 Cor. 10:31). This is the priority, to serve God and to glorify Him.

Our concern should be to do our duty under God and to extend the claims of His Kingdom to every realm of life. The Lord is ultimately our surest defense and protection, and He will protect us most when we are most concerned about putting first things first.

“But seek ye first the kingdom of God, and his righteousness; and all these things shall be added unto you” (Matt. 6:33).