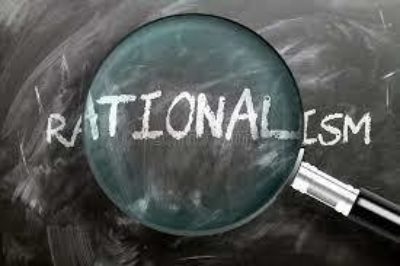 One of the common errors in modern thought is the confusion between reason and rationalism. If one is opposed to rationalism, it is mainly assumed that one is irrational, which is similar to saying that, if one is opposed to Romanticism, one is against emotions or feelings. Such an attitude would mean that Shakespeare’s works are devoid of emotions. The simplest definition of rationalism sees it as the foundation and basis of establishing religious truth, that reason is the essential source of religious knowledge rather than revelation and/or sense perception, and that our main source of religious knowledge is reason. On the other hand, reason is simply a sufficient ground of explanation to enable a conclusion or explain a fact. It is the power of comprehending, inferring, or thinking in an orderly way.

To illustrate, we can by faith accept the doctrine of the atonement and then by reason understand its implications. From a rationalistic perspective, we would subject the doctrine to the test of satisfying the requirements of rationality before we accept it From the perspective of the rationalist, John Calvin and Cornelius Van Til were irrationalists because they upheld the primacy of revelation and held God to be understandable and coherent while incomprehensible because the mind of man can never encompass nor comprehend the infinite and eternal being and mind of God.

Another problem in rationalism has been very ably cited by Joseph Braswell:

The Enlightenment’s view of Reason was at bottom impersonalistic, positing an absolute rationality of the universe that was person-independent. Human concepts were supposed to conform to the things themselves; the object to be known was itself the norm of truth in a correspondence of propositions to objective states of affairs, of mind to thing or subject to object. This proved to be a dead end, as the postmodernists have demonstrated. Correspondence is now seen to be a correspondence of my judgments with the judgments of others within the social context of accredited research communities (or other appropriate groups of a potential objectors and critics) who share my research tradition (our paradigm) and sit in peer review of my assertions. (Joseph Braswell, “Christian Epistemology in the Postmodern Age,” in Journal of Christian Reconstruction [Fall, 1996]: 14, no. 1, pp. 258–259. Braswell’s entire article is exceptionally telling.)

This impersonalism goes back at least to Aristotle, for whom God was simply a limiting concept to avoid an infinite regress. His impersonalism was antitheistic in all its implications.

The rationalist seeks to prove the existence of God, failing to recognize that God is the source of all created beings and the ground, not the object, of proof. The arrogance of rationalism is its insistence that man’s own reason is the ground of proof! One bumptious churchman who traveled widely after World War II would tell people that he could prove to them that God exists if they would only give him a little time. But St. Paul in Romans 1:17–23 makes it clear that the lack of the knowledge of God is not an epistemological question but a moral one. All men know that God is, for the things visible and invisible “from the creation of the world are clearly seen, being understood by things that are made, even this eternal power and Godhead; so that they are without excuse” (Rom. 1:20). Ungodly men hold (or, hold back) the truth in unrighteousness or injustice (Rom. 1:18). Because of their moral rebellion, they rebel also at the knowledge of God, the Author of the law they hate.

In other words, rationalism substitutes for the moral problem that faces all men an intellectual problem. This Calvin denied, as did Van Til. Man’s problem is his rebellion against God, his war against his Maker. Rationalism thus falsifies the most basic aspect of the faith, namely, that sin, not a failure of knowledge, has created the great divide between man and God. In Psalm 14:1, we are told that, “The fool hath said in his heart, There is no God.” We are then told that these fools are corrupt, and “there is none that doeth good.” The fool is nabal, a stupid, impious, wicked, and vile man. His problem is moral, not intellectual.

One of the great evils of rationalism has been to falsify man’s religious problem, to try to make it intellectual rather than moral. Theological rationalism opens the door to apostasy. Rationalism is thus hardly a reasonable faith!

It is significant that today rationalism is virtually dead outside of theological circles, where too often eighteenth-century rationalism is alive and well, and also deadly to the faith. Too often those who claim to uphold the faith and its fundamentals are thoroughly wedded to Enlightenment premises. It is not surprising, then, that colleges and the seminaries they found to preserve the faith end up by undermining it.