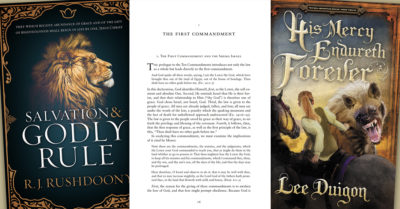 Christians still consume the printed word, and Chalcedon/Ross House Books is keeping the presses warm with non-fiction and fiction volumes.

Books continue to play an important role in the ongoing work of Christian Reconstruction, and caring for the literary legacy of Chalcedon/Ross House Books is a central part of that work.

In 1983, we published Rushdoony’s Salvation & Godly Rule which, at the time, was an unlikely title for a serious Christian book outside of Reconstructionist circles.

But it was such titles that helped our books stand out during a time of great transformation during the 1980s. It was the early days of Christian conservatism, and although Rushdoony was not writing specifically for a political purpose, the idea of dominion was linked with that burgeoning political movement.

Dominion is so much more than politics, so we’re delighted to be sending Salvation & Godly Rule to be reprinted with a new cover design in hopes of inspiring Christians to embrace the victory they have in Christ and to apply their faith to every area of life.

Recently, Chalcedon received the publishing rights to volume one of The Institutes of Biblical Law from Presbyterian and Reformed Publishing. We immediately began the arduous process of correcting typographic errors—which Rushdoony had long wanted to do—and then adding new, extensive indexing to make this important book even more useful!

The book was also re-typeset, so the reading will be crystal clear, but it will still feature the same dustjacket so that it will visually match the existing three volume set.

The new Institutes is at the press now, so stay tuned for more information!

Also going to press at this time is His Mercy Endureth Forever, which is the twelfth volume in the popular Bell Mountain fantasy fiction series by Lee Duigon.

The series began in 2010, and Lee has written succeeding volumes at a pace of nearly one installment per year.

The beautiful custom covers are the handiwork of professional digital illustrator, Kirk DouPonce, a sought-after Christian artist who creates covers for major book publishers. Kirk reads each of Lee’s manuscripts and then creates custom art based upon the story.

You can learn more about all of our books by visiting our online store at ChalcedonStore.com.

Taken from the April 2020 issue of our bi-monthly Chalcedon Report printed newsletter. Receive your subscription to this newsletter along with our bi-monthly Arise & Build all for just $20/year. Click now to subscribe.