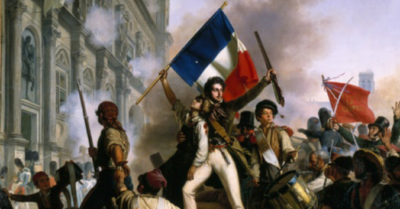 On July 14, 1789, the French Revolution began with the storming of the Bastille. In the succeeding months and years, millions were killed to help establish the civil reign of “Reason.” On July 14, 1989, many heads of state gathered in Paris to honor and celebrate that event. Only one, Prime Minister Margaret Thatcher of Great Britain, called attention to the murderous nature of the French Revolution and questioned the absurd idea that human rights and freedoms originated in it.

The French Revolution quickly developed into the Reign of Terror, as have all revolutions since then. It was morally and intellectually bankrupt, but men have continued to believe that men, nations, and history can only be regenerated by bloodletting, and murders continue.

The thesis of revolution is radically anti-Christian. Revolutionary man believes that the rise of Christianity was the fall of man, and that the true direction of history must be from Christ to Adam, from supernatural man to natural man. This means that Christianity is the greatest impediment humanity has ever had, and so the forces of revolution seek its obliteration. The greatest holocaust of all history, and of the twentieth century, has been and is the massacre of Christians. It occurs all over the world, and the media is in the main silent concerning it.

In 1989, the evil of revolutions was clearly underscored by the events in China, Russia, Poland, Bulgaria, and elsewhere in the realms of humanistic statism. None of this dimmed the determination to celebrate the French Revolution, and to extend the dominion of revolution.

But what about counterrevolution? Did it not finally succeed in Europe after Napoleon? It did indeed, and the successes of the counterrevolution revealed its bankruptcy. Its theorists were right: the old order, however bad, was better; they worked for a restoration.

What they failed to recognize was that the old order was a decayed relic of Christendom. A Christian society could not be restored without a vital Christianity. Chateaubriand could say, “Religion is the source of liberty,” but this intellectual awareness did not necessarily mean a living faith (Jacques Godechot, The Counter-Revolution: Doctrine and Action, 1789–1804 [Princeton University Press, 1971], p. 135). To talk about “God and country” does not align God on your side, nor mean that you believe His every Word.

The failure of counterrevolution, put simply, was that it wanted the form of godliness but not the power thereof, the name of God but not God Himself. Men are not governed by echoes, however lovely their sound, and counterrevolution was an echo.

The greatest theorist of the counterrevolution was Edmund Burke. Burke was a good analyst of his times; he knew the strength of the old order; Burke saw the value of Christian premises, but reality to him was continuity, not Jesus Christ. As a result, Burke’s work was essentially a failure.

Other men recognized the failure of the revolution, and of the counterrevolution. For them, Christianity was not an option. Civilization, as they saw it, needed a new foundation. In this, they agreed with the French Revolution. Two men who were deeply concerned over this issue were Ralph Waldo Emerson and Thomas Carlyle. Both had abandoned orthodox Christianity. Emerson, in “Historic Notes of Life and Letters in New England,” wrote of the new generation of men “born with knives in their brains, a tendency to introversion, self-dissection, (and) anatomizing of motives.” These men with knives in their brains put the knife to Christianity. Emerson and Carlyle had seen the removal of Christianity from the center of their own being. Even among conventional Christians, faith was less and less the dominant force in their lives. God’s law was giving way to the state’s law.

Emerson and Carlyle were not as radical as men like Karl Marx, Max Stirner, and Friedrich Nietzsche, although “Carlyle did love destruction for its own sake, the attraction was mainly esthetic” (Kenneth Marc Harris, Carlyle and Emerson [Harvard University Press, 1978], p. 116). As far as ideas were concerned, their premises were very radical. Man and history replaced God and Christ in their thinking (ibid., p. 117ff.). For Carlyle, the hero, and for Emerson, the power of man and his character replaced the power of God (Robert E. Spiller and Wallace E. Williams, eds., The Early Lectures of Ralph Waldo Emerson, vol. 3, 1838–1842 [Harvard University Press, 1972], pp. 243–244, 276–277, etc.).

As counterrevolution developed into conservatism, its premises, despite a sometimes pious façade, became as humanistic as those on the left. Both revolution and counterrevolution, right and left, had become humanistic and explicitly or implicitly anti-Christian. Because the churches are themselves all too often infused with humanism, they have been little disturbed by these developments.

National indignation should have been aroused when it became known that, during the Reagan presidency, homosexual prostitutes and their customers were at times given private, guided tours of the White House. One wealthy homosexual in particular had much power among Republicans (Gary Potter, “GOP Homosexuals: The Reason Why ‘Social Agenda’ Gets Nowhere?” The Wanderer, July 20, 1989, pp. 1, 8). John Lofton wrote in the Washington Times (July 31, 1989) about another prominent Republican who had raped and sodomized a teenaged intern, and in another case, was convicted but given a suspended prison term for a savage five-hour rape of a young woman. A prominent conservative publisher berated John Lofton for writing against a Republican! Apparently only Democratic rapes are bad.

The rot runs deep, not only in the body politic but in the churches. Too many churchmen are too busy warring against each other, or waiting for the Rapture (due in eighteen months, I was told today), and being generally irrelevant to know what is happening all around them.

For some years, I have been in many court trials as a witness for churches, Christian schools, home schools, families, and so on, who faced an attack for their faith and practice. I have seen a state attorney hold aloft a Bible and declare it a child-abuse manual. Several pastors were on trial for requiring the chastising of children in their schools or day-care facilities, although no parents had complained. This was in a southern Bible-belt state. No church members were in the courtroom to lend their moral support. (Neither pastors nor the lawyer have ever informed me of the outcome of the trial, a routine occurrence. So much for the calibre of our churches!)

Incidents like this are commonplace. The enemy is shooting at Christians, and the church is indifferent.

But now total war is under way, as Shelby Sharpe so telling reports it. The purpose is the obliteration of Christianity. If America’s churches do not resist this attack, God will give them over to destruction and replace them with another people and other churches.

In 1 Peter 4:17 we read, “For the time is come that judgment must begin at the house of God: and if it first begin at us, what shall the end be of them that obey not the gospel of God?”

What will happen to churches who are blind to what is taking place? And what can we say of a political order, which, faced with crisis upon crisis, plans to convert the country to Methanol-powered automobiles, using a particularly dangerous and poisonous fuel? There is a growing blindness all around us which is a prelude to God’s judgment. There is a concern with irrelevant issues which is always the mark of irrelevant man.

We are at war, but the weapons of our war are not material but Biblical and spiritual ones, and our calling is to believe and obey the Lord, to bring people to Christ, to extend His dominion, and to establish the crown rights of our king in every area of life and thought.