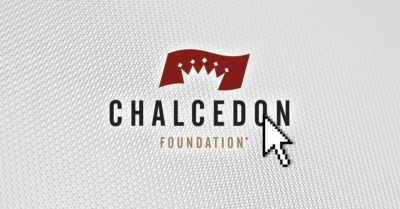 The landscape of communication and media is constantly in flux, but the true constant in all things is faith and ideas. The word media simply means broadcasting, and whether it’s radio and newspaper, or television and social media, the real issue is always what is being broadcast and not the mediums themselves.

This is proven true especially for Chalcedon as we continue to expand our footprint on various forms of media such as social media, website, podcasting, video, and digital publishing. Even in the online space we’re seeing that what sets us apart are the ideas we put forward and the faith we proclaim.

There was a time when the word viral was a frightening term linked to a public epidemic of sickness, but in today’s online space, viral is what one seeks if he wants attention. It’s now common to hear people ask one another if they’ve seen a viral, or trending, video much the same as they once asked if another had seen the previous night’s episode of M*A*S*H.

Now, content producers are desperately trying to develop content that can go viral which means something that people will share with one another much the same as they share a cold or the flu. The challenge is not simply creating something that can go viral, but now content creators are up against a mysterious and powerful digital deity called the algorithm.

The algorithm is a calculating digital operation that determines what content is seen online and who sees it. For example, a typical Facebook user would be flooded daily with “posts” from the friends, businesses, organizations, and periodicals they follow if Facebook’s algorithm didn’t curate and set rules that limit what that user sees. Facebook’s objective is to keep a user on the social media platform for as long as possible and being inundated with too much content or advertising will drive users away from the app.

For the businesses, organizations, and persons who run Facebook Pages (Pages are like having your own website within Facebook’s platform), they feel the algorithm is penalizing them because so few of their posts are actually seen by their followers (subscribers). In 2017, the average reach of a Facebook post was about 8.92%, and these stats haven’t improved much. In other words, if you have a 100 people following your Facebook Page, your post would likely only be seen by 9 people or less.

Facebook, however, is not penalizing these page owners, but this does mean that content creators must know their audience and what that audience wants to see. In this regard, page owners have to know the habits and interests of their followers far better than they know the technical tools of social media. Again, the media may change, but people and ideas don’t.

There are exceptions to the rule, and when it comes to social media, it’s the cute, the trivial, and the provocative that wins over the algorithms. However, this is not really beating the algorithm since the algorithm wants to know which video has viral potential because such content keeps users engaged on the platform. This is why memes and cat videos, as examples, do so well raking up millions of views. Social media is still new, but cat lovers have been around since ancient Egypt!

There is another exception to the rule, and that is faith and the faith community. Again, what’s important to understand is that in the digital space it’s what’s going on with people that matters and not the digital platforms themselves. There may be a good many cat lovers on social media, but there are just as many who love God, and the more dedicated the Christian community, the better those Facebook Pages will perform who serve those communities.

This is certainly the case with Chalcedon where the average reach of some of our Facebook posts can be as high as 50% or more. Why is this the case? Why would a bunch of memes featuring quotes by R. J. Rushdoony have such a viral effect?

The reason for the greater organic reach is that those in the faith community are passionate about their beliefs, and they are more prone to share Christian posts because it’s a digital form of evangelism. Sharing content on Facebook is an easy way to get a message out to more people. It’s also a way to engage in debate with unbelievers. In fact, whether politics or religion, one could say that much of the contemporary culture war is a war of memes.

In Chalcedon’s case, the Christian Reconstruction community that’s present online is small but passionate—small in comparison to Facebook’s two billion users. For the average follower of Chalcedon’s Facebook page, it’s a joy to see a quote, an article, or a video from Chalcedon because it both provides the user with encouragement and education in addition to giving them something they can share. Although on a much smaller scale, this is the viral effect in action as faithful Christians push out Chalcedon’s content to an ever-widening audience.

The challenge for Chalcedon then becomes what sort of content should we post? With audiences consuming different forms of media whether print, audio, or video, we are laboring to meet as many as we can in the format they prefer. Granted, we can’t cover all platforms or media expressions, but we find that what’s most important is to push the firstness of the Kingdom of God.

What greater agenda is there? Is not the Kingdom of God the primary purpose behind all theology and doctrine? Isn’t the emphasis on God’s law so that we can help extend and advance God’s Kingdom in the earth? Our Lord said, “But seek ye first the Kingdom of God” (Matt. 6:33a), and for Chalcedon this means promoting the idea of the firstness of the Kingdom even if it’s simply a hashtag: #SeekYeFirst.

Each Sunday more and more of our online community are gathering around their computers or mobile devices to participate in the live streaming video broadcast of our Sunday Chapel Service featuring expository sermons by Mark Rushdoony on our Facebook page.

We’ve often heard from Christian families and individuals who struggle to find a church that teaches Christian Reconstruction, and our weekly live broadcasts are a great way for them to supplement their desire for such teaching. As of the publishing of this issue of the newsletter, Mark has streamed 98 of his weekly sermons.

Our very own Andrea Schwartz has done the same with her weekly Homeschooling Help broadcast cohosted by Chalcedon supporter Nancy Wilk. It streams live on our Facebook page each Tuesday at 1:00 pm (EST), and they’ve published over 45 episodes to date!

Although he’s on an extended break to tend to other projects, Chalcedon vice-president, Martin Selbrede, has graciously donated his time to hosting Chalcedon Q&A live video broadcasts (62 so far) on our Facebook page where he spends no less than an hour after Mark’s Sunday sermons to answer questions. Martin’s theological and scriptural knowledge are extensive, and viewers look forward to getting their questions answered in real time from the convenience of their computer or mobile device.

A Great Way to Keep Up!

We have other online programs such as the Out of the Question Podcast, the weekly Men’s Roundtable Discussions, and our monthly Book of the Month Club discussions. If all this seems like a lot, it is, but we want to reach as many as we can wherever we can. If you’d like to keep up with all that we’re doing, then take a moment today to register for our digital mailing list where you’ll receive regular updates, schedules, articles, and special offers. Just visit Chalcedon Sign-up and use your best email address. Thank you for all your support!