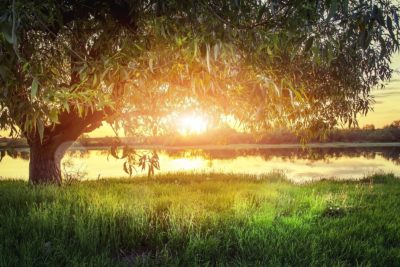 Ezekiel experienced this while in the middle of the waters, not while observing, dry and safe, from the shore. His angelic guide didn’t lead him back to the shore until after Ezekiel had encountered waters so deep he had to swim. The prophet is returned to shore only at verse 6, no doubt relieved they weren’t going another thousand cubits downstream. Before being pulled out of the river (now so deep his feet no longer reached the bottom) Ezekiel hears the angel ask him, “Son of man, hast thou seen this?”

Fairbairn points out that despite having no tributaries, the river widens and deepens and the amount of water in it continues to increase:

The increase here comes from no extraneous and incidental sources; it is all along the temple waters that form the river, and at last empty themselves into the sea; and yet, from being at first but a small streamlet, these grow, by self-production, in the space of little more than a mile, into an unfordable river!1

The crucial point to grasp here is the unity of the water that Ezekiel was standing in. There are no breaks in the water: from bubbling stream to massive river, it is a single entity representing the Kingdom of God and illustrating its growth over time. No matter where Ezekiel stood in the waters, he was in the same water: he was in the midst of the Kingdom, whether in its earlier ankle-deep form or its later status as an immense river.

To hammer home the unity of this vision of the Kingdom, verse 12 says of the waters irrigating the trees alongside the huge river that they had “issued out of the sanctuary,” which happened one thousand cubits before the waters ever reached Ezekiel’s ankles. There is only one river with only one kind of water in it from only one source.

It is common to talk about the Kingdom of God being now, and simultaneously not yet. It is here, but not in its fullness. By the same token, Ezekiel was as much in the water when it was ankle-deep as when it was knee-deep, or loin-deep. But the conclusion of the vision involved water even deeper than that.

When we think the Kingdom is “not yet,” that it’s something wholly future, we miss the fact that we’re standing in the middle of the Kingdom, somewhat closer to its origin than to its destination. But the same waters we’re standing in right now will inexorably grow into their fullness.

And those waters are in motion, flowing and growing through time. The Kingdom is marked by growth (Christ’s Kingdom growth parables make this clear, with His mustard seed parable referencing the prophecy of Ezek. 17:22–23 that God would plant a tiny twig that would grow into a tree so large that all the birds under heaven would dwell in it). There was nothing static about this vision: the waters were flowing into their future form, but Ezekiel wasn’t made aware of the truth of the matter until the angel led him through the middle of the water ever eastward, fast-forwarding the prophet so he could grasp what was happening.2

The Kingdom is not static. Time is on its side. Wherever we stand in the stream of time, we naturally make assumptions. We may be standing ankle-deep, and our theology says the waters will either stay ankle-deep or will dry up. We don’t spontaneously assume the impossible: that the waters will multiply themselves miraculously as they move onward. And since we’re conscious of the Scriptures that speak about a glorious river of living waters, of a glorious Kingdom, we easily scorn the ankle-deep waters and think, “These are not the waters God promised. We’re not in the Kingdom. My wet feet here mean nothing, because God’s not truly working yet, not ruling yet. We’re obviously standing in the wrong water.”

And we couldn’t be more wrong.

The Danger of Despising the Day of Small Things

Dr. R. J. Rushdoony drew attention to the practical implications of a failure to grasp our place in the current state of God’s Kingdom:

This makes the issue clear-cut: there is no kingdom for us, if we are not in the kingdom now; there is no new creation we can look forward to in eternity, if we are outside the new creation now. The kingdom is and is to come; the new heavens and new earth are and are to come. The fullness is at the end of time, but it is here today in reality. This means that Christians are neglecting their inheritance and failing to make use of their power in Christ: they live in terms of victory tomorrow instead of victory today …

Revelation was written to suffering and troubled Christians, and also to smug and self-satisfied Christians, who alike waited for the kingdom to come and felt that the world’s problems presented a hindrance to Christ and His kingdom. But Revelation makes clear that the kingdom is now, and that, not by evading conflict, responsibility, and suffering, but by assuming it, do Christians and the Church gain their inheritance.3

In short, bad theology always cripples those who follow after it. In this instance, our understanding of God’s Kingdom, if defective, warps and distorts most everything in our Christian walk, causing the salt to lose its savor. And the defect here is failing to grasp the unity of His Kingdom: that the stream we’re standing in (1) is the right stream—God’s stream—and (2) that it will continue to grow in size and conquer every obstacle set in front of it. These waters, like the stone cut without hands, is God’s own handiwork: His Kingdom penetrating the world of sin and darkness with living waters.

This fundamental unity of the Kingdom is brought into clear focus by Herman Ridderbos:

For what will ultimately be received in the kingdom of God depends upon what a man possesses of it now. For “he that hath to him shall be given: and he that hath not shall lose everything.” And what a man “has” of it, depends upon hearing, i.e., upon the way in which he bears the responsibility with respect to the word of the kingdom that has been scattered like seed. This hearing is now “the measure with which a man metes” (Mark 4:24) … Here, too, everything concentrates on the unity of the kingdom in the present and in the future. What one receives from the Sower will also be received from the Judge in double measure.4

Ridderbos then asks whether the parable of the mustard seed only focuses on the tiny seed and massive final tree, ignoring everything between, or if “there is also an indication of the process of development of the Kingdom that takes place in the meantime.”5 Is the end result (a massive tree) simply there to comfort6 those who only know the Kingdom in its humble beginnings? Or is that only part of the story, as Ridderbos suggests:

Yet it is unnatural to have an eye only for the beginning and the end and to eliminate at all cost all that lies in between. Everything depends upon the idea that is formed of the way in which progress is made from the small beginning to the wonderful end.7

And there it is in a nutshell: what lies in between the beginning and end? We do. We’re in the midst of the Kingdom, and can ill afford any misapprehensions on that point. Any teaching to the contrary derails us in the midst of that Kingdom, denies us the incentive to labor for His Kingdom, and mutilates “the measure with which a man metes” in determining our present duties and responsibilities.

For if Christ is not King now, then you might act as if you have no king but Caesar, and then give chapter and verse to justify your abdication. But at every point that Ezekiel observed the growing stream, he was observing the Kingdom of God, whether shallow and humble or massive and torrential. It was a unity, without any breaks, interruptions, or parentheses.

To stand in His stream, in the midst of His growing Kingdom, and deny it, is to close one’s eyes. When the apostles of retreatism one day face Him to explain how they preached the absence of His Kingdom, God might just simply ask them, “But aren’t your feet wet?”

Taken from the July 2019 print edition of Arise & Build. Subscribe today to have this newsletter mailed to your home!

2. The fact is that “the kingdom of God cometh not by observation” (Luke 17:20), so Ezekiel’s is a special case where God allowed the prophet to observe its growth in a divine vision, given for our edification.

6. Ridderbos quotes H. M. Matter regarding the “eschatological great tension” that reduces some “to a state of impatience and despair on seeing the great distance between what the kingdom was yet to be and what was in the works of Jesus.” ibid., p. 180, n104.