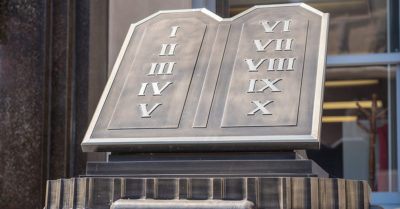 The battle for righteousness, or justice, must concern all Christians. Moreover, the only standard, source, or law of justice can be the law-word of God. We face a secular society. It is secular in the sense that it is not governed by priests or clergy, but by laymen, and it is also secular in that it is outside God's Kingdom and seeks a kingdom apart from the Lord.

In considering the application of God's law to such a society, we face two problems. First, the world is in revolt against our God and His law. Psalm 2:1-3 describes this world conspiracy against God:

1. Why do the heathen rage (or, tumultuously assemble, or conspire), and the people imagine a vain thing?"
2. The kings of the earth set themselves, and the rulers take counsel together, against the LORD, and against his anointed, saying,"
3. Let us break their bands asunder, and cast away their cords from us.

Second, the church is in revolt against God's law and sets it aside to a large degree. Too often churchmen are ready to listen to ugly misrepresentations of God's law, and to accept them. The law of God is seen as harsh, oppressive, and conducive to tyranny.

The fact is, however, that the total number of laws in Scripture are only a few hundred. All the rest of Scripture is to a degree a commentary on those laws, and the whole of the Bible makes up one none-too-large volume. The laws of the nations, and even of cities, fill libraries and are increased annually and often daily. Thus God's laws are few, and they provide for a godly free society. But this is not all. Many of God's laws are without any provision for penalties by man, the state, or the church. An example of this is tithing. In Malachi 3:8-12, we are told that God imposes penalties for failure to tithe, and blessings for faithfulness, but, here as elsewhere, men cannot play god and impose penalties.

The purpose of God's law is to provide government under God, not under men, not the church, nor the state. God's law is the means to a free and godly community. In surveying Biblical law, we must first recognize its premise. Fallen man can only create a sinful society and a tyrannical one. The goal of unregenerate man is a new Tower of Babel, Babylon the Great. It means playing God and controlling all things. The goal of regenerate man in Christ is the kingdom of God and the New Jerusalem, a realm wherein righteousness or justice dwells (2 Peter 3:13). Fallen man cannot build a just social order because he is in revolt against the God of all justice or righteousness and His law, which is justice. God's law is "the perfect law of liberty" (James 1:25), and it is a law hated by all who are in sin, which is slavery (John 8:31-36).

Second, for God's government and law to function, we must tithe. The tithe is God's tax, for His government. This tithe is then tithed to worship (Num. 18:25-28), so that the sanctuary receives one percent of a man's increase. Because civil government receives only half a shekel a year from all males twenty and over, it too, like the church, is limited. The rest of the tithe, as well as the poor tithe, goes for a variety of governmental functions, including education, health, and welfare.

The early church provided courts (in terms of 1 Corinthians 6:1ff.), inns for Christian travelers, homes for the needy and aged, hospitals, homes and schools for homeless children, ransom for captives, and more. Throughout Scripture, the test of faith includes ministering to people in distress. Our Lord declares, "Inasmuch as ye did it not to one of the least of these, ye did it not to me" (Matt. 25:45).

Third, the basic institution in Scripture is neither church nor state but rather the family. Because the family is God's basic institution, it is most protected by God's law. The offense of Biblical law in the eyes of many is its strict legislation to protect the family, because treason in Scripture, on the human scene, is to the family, not to the state. The modern concept of treason does not exist in the Bible. Because the family is the basic order of life, God's law guards the life of the family. The family is man's first and basic government, church, school, and vocation. Anthropologists and sociologists have recognized the centrality of the family in history. C. C. Zimmerman, in Family and Civilization (1947), classified families as trustee, domestic, or atomistic. The trustee family is basic to social order; the domestic family is still strong, but the state is given preeminence; the atomistic family marks the death of a society. The law of God requires a trustee family. The law is addressed to the covenant family, as in Deuteronomy, or in Proverbs. It requires the covenant people of God to establish God's order, beginning in their families.

Fourth, because God's order must be just or righteous, His people must have courts of justice. Hence, in 1 Corinthians 6:1ff., Christians are commanded to establish such courts. This they did, and soon provided justice in terms of God's law for believers and non-believers for many centuries. In the United States, Laurence Eck has reestablished Christian courts, and the results have been excellent.1 The definition of justice in a humanistic court will not agree with God's law and justice. Hence, in a humanistic society, a separate court system becomes a necessity, and the Bible becomes the law book of such courts.

Fifth, according to Scripture, the penalty for crime is essentially restitution. In minor offenses, corporal punishment of a very limited sort is cited; in capital offenses, the death penalty is required. According to Exodus 22:1-17, restitution can be double or up to fivefold, depending upon the nature of the offense. Forgiveness in Scripture means, charges dropped because satisfaction has been rendered, or, charges deferred for the time being (Luke 23:34). Restitution thus means that there must be a restoration of God's order. If men do not enforce God's law as a nation, God will enforce it against them.

Sixth, a basic aspect of God's law is its concern for the earth. The land too must have its Sabbaths; war cannot be used as an excuse to destroy fruit trees and vines; sanitation is required, and more. Paul tells us about the goal for creation in God's plan of redemption:

19. For the earnest expectation of the creature waiteth for the manifestation of the sons of God."
20. For the creature was made subject to vanity, not willingly, but by reason of him who hath subjected the same in hope,
21. Because the creature itself also shall be delivered from the bondage of corruption into the glorious liberty of the children of God.
22. For we know that the whole creation groaneth and travaileth in pain together until now.
23. And not only they, but ourselves also, which have the firstfruits of the Spirit, even we ourselves groan within ourselves, waiting for the adoption, to wit, the redemption of our body. (Romans 8:19-23)

In our era, because of Pietism and its retreat into the inner man, we have lost this perspective. Let us remember that Calvin, while decrying idle speculation, insisted that Paul's words meant the resurrection of animals in God's glorious new creation. Let us remember too that God imposed seventy years of captivity on Judea for the seventy Sabbath years which had not been observed. Such laws were not a curiosity to our Christian forebears, and we dare not regard them as such now or ever.

Seventh, there is a very important thrust to God's law which we now disregard or spiritualize into meaninglessness. Paul echoes these laws in declaring, "I have learned, in whatsoever state I am, therewith to be content" (Phil. 4:11). Scripture says,

8. Remove far from me vanity [or, futility] and lies: give me neither poverty nor riches; feed me with food convenient for me,
9. Lest I be full, and deny thee, and say, Who is the LORD? Or lest I be poor, and steal, and take the name of my God in vain. (Prov. 30:8-9)
6. But godliness with contentment is great gain.
7. For we brought nothing into this world, and it is certain we can carry nothing out.
8. And having food and raiment let us be therewith content. (1 Tim. 6:6-8)

If we limit these words to their spiritual implication, we lose their full scope. In Deuteronomy 15:1-6, we are forbidden to go into debt, in times of need, for more than six years. The seventh or Sabbath year must also be a rest from debt. The goal is to live debt-free, to "owe no man anything, but to love one another" (Rom. 13:8). God's purpose for our lives is to live well because we live in faithfulness to Him.

Eighth, according to 1 John 3:4, "sin is the transgression of the law" (i.e., the law of God). The word translated as sin in this verse is defined as anomia, anti-law or lawlessness. Since God's law is righteousness or justice, to be a sinner is to oppose by action God's justice. Jesus Christ is our Savior from sin to righteousness or justice. We have been saved, says Paul, in order

That the righteousness of the law might be fulfilled in us, who walk not after the flesh, but after the Spirit. (Rom. 8:4)

The law must be fulfilled, i.e., put into force, in us and through us. It is an error to teach that Christ saves us from hell; He saves us from sin and guilt. Hell is simply the logical conclusion of sin, of rebellion against God and His law: it is total separation from God.

Ours is a secular age because it wants no part of God. Remember, the death of God school of "theology" in the early 1970s did not say God is dead, but rather, God is dead for us, and we refuse to acknowledge whether He exists or not. This is secularism. If we refuse to live by every word that proceeds from the mouth of God (Matt. 4:14), then we too become secularists in this same sense.

The goal of God's Kingdom is the total holiness of all things. According to Zechariah 14:20-21,

20. In that day shall there be upon the bells of the horses, HOLINESS UNTO THE LORD; and the pots in the LORD's house shall be like the bowls before the altar.
21. Yea, every pot in Jerusalem and in Judah shall be holiness unto the LORD of hosts: and all they that sacrifice shall come and take of them, and seethe therein: and in that day there shall be no more the Canaanite in the house of the LORD of hosts.

Taken from In His Service: The Christian Calling to Charity by R. J. Rushdoony.