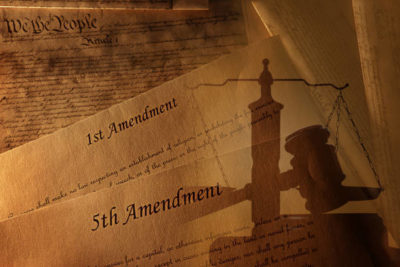 Excerpted from "Education and Rights," Chalcedon Report No. 15, December 1, 1966

The Bill of Rights was written because the states and citizens of the newly formed United States pointed the finger at that federal government as the threat to their liberties. Today, the federal government and the U.S. Supreme Court, far bigger than the people of 1787 ever imagined it could be, point the finger at landlords, private associations, individuals, and various small organizations as the threat. Conservatives in particular are denounced by politicians as a menace to liberty. In other words, the wolves are insisting that the Bill of Rights was written to protect them from the assault of lambs, and that it therefore cannot be used by lambs.

But the Bill of Rights rests on a Biblical foundation. Its origin is in the demand for the respect for other men’s life (“Thou shalt not kill”), home (“Thou shalt not commit adultery”), property (“Thou shalt not steal”), and reputation (“Thou shalt not bear false witness”). (In newsletter no. 6, we discussed the origins of various other laws, including legal procedure and the Fifth Amendment, in the Mosaic law.)

Can we expect water to come out of a faucet when the reservoir is bone dry? Will a new faucet do the trick for us? To imagine such a possibility is ridiculous, but in essence this is what people are demanding today. The American reservoir is dry. Spiritually, we are bankrupt. The overwhelm­ing majority of Americans are content, with occasional grumblings, to re­main in churches which are clearly apostate. They sit under pastors who know less Bible and doctrine than they do, which isn’t much, and whose politics is the politics of revolution. Is our hope to be in such a people, whose presence in such churches has the condemnation of Scripture?

True, the American people are capable of getting angry now and then at election time. They don’t like riots, obvious corruption, and other things, but a protest vote is not a reviving power. Even the criminal syndi­cates resent corruption in their own ranks and liquidate thieves. Victory at election time is very important, but it is not the answer. Good plumb­ing is necessary in any building at any time, but it cannot take the place of a reservoir. We need both the reservoir and the right kind of plumbing, religious, political, and educational. To place our hope in plumbing alone is both foolish and disastrous.

Our problem is this: the plumbing is in very bad shape. We do need new plumbing, i.e., new politics, new churches, new schools, and so on, and we need these things urgently. But all these things are useless without the reservoir, the triune God. We need more faith, and real faith, not the compromising position of men like Billy Graham, nor the wicked stand­pattism of people who feel that if they grumble occasionally, God will bless their membership in apostate churches. Real faith makes a stand first and foremost in terms of the faith.

Is there much of this? On the contrary, there is very little real faith. Even in the few separated and faithful churches, members move in terms of trifles, not in terms of faith. They leave because of a spat with Mrs. Jones, or because they have found a church with a better choir, or a better youth group. They move in terms of everything except faith. And they, too, shall be judged.

The prospect, then, is one of judgment. But is that all? On the con­trary, every time of judgment is also one of salvation, because when God judges the ungodly, He also moves to deliver His faithful saints.

But, most of all, the future is a glorious one because it is in the hands of God, not in the hands of men. Man proposes, but God disposes. As far back as the days of the Flood, and then the Tower of Babel, man planned a world of tyranny under man’s humanistic world order. But God has confounded every plan of man to establish his humanistic world order, and His power is unchanged still.