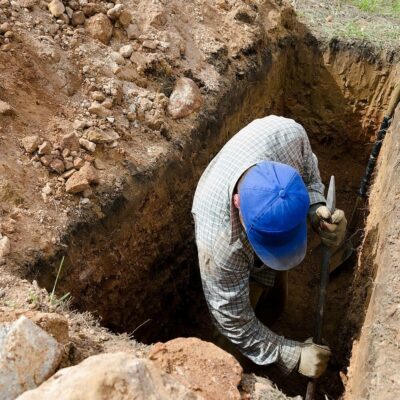 Recently, someone passed on to me a very interesting article. The November 1965 American Legion Magazine, in an article on “The Systematic Terror of the Vietcong,” by Deane and David Miller, cites among the instances of terrorism, the execution of a farmer who “was ‘tried’ by a ‘People’s Court,’ sentenced to death, made to dig his own grave, shoved in and burned alive” (p. 11). This incident is a practical application of two major Communist principles, the use of terror and the idea of making the enemy dig their own graves. The use of terror rests on both a delight in terror and a belief in its power to intimidate opposition. Making people dig their own graves is again a strategic tactic and an evidence of a vicious and incorrigible will to evil.

The question we need to ask is very simply this: are we being misled into digging our own graves? The evidences indicate that we are, and in a great many directions and ways. Our purpose now is to analyze the use made of one bulwark of liberty, whereby American indignation is turned against this bulwark to its own destruction. This is the Fifth Amendment to the United States Constitution:

No person shall be held to answer for a capital, or other infamous crime, un­less on a presentment or indictment of a Grand Jury, except in cases arising in the land or naval forces, or in the Militia, when in actual service, in time of war or public danger; nor shall any person be subject, for the same offence, to be twice put in jeopardy of life or limb; nor shall be compelled, in any criminal case, to be a witness against himself; nor be deprived of life, liberty, or property, without due process of law; nor shall private property be taken for public use, without just compensation.

Our concern is particularly with the prohibition against compulsory self-incrimination. The roots of this Fifth Amendment are Biblical. Apart from Biblical law, all law has made legal the use of force to compel a wit­ness to testify against himself. The result has been torture and terror, and the certainty of conviction, whether the victims of such compulsion were guilty or innocent. The Biblical law recognized voluntary confession, but, apart from that, conviction had to be on the basis of the testimony of two or three witnesses (Deut. 19:15), and under oath (Exod. 22:10–11). An oath was a conditional curse, and the penalties for false testimony were severe, requiring restitution (Lev. 6:1–6). A witness to a crime had an obligation to testify. “When a person sins by being adjured to testify and has seen or has learned of the matter, but fails to inform, he assumes his iniquity” (Lev. 5:1, Berkeley Version). In other words, the witness becomes an accomplice by his failure to testify against the criminal. Two witnesses were the minimum necessary for conviction (Deut. 17:6–7; 19:15). The requirement of witnesses was clear-cut: “Present no hearsay, unsupported evidence; do not cooperate with an evil-minded person to become a malicious witness. Do not follow the crowd in wrongdoing, nor, when witnessing in a lawsuit, lean toward the majority to thwart justice; neither be partial to the poor man in his suit” (Exod. 23:1–3, Berkeley Version). The place for testimony is in a court of law, not in neighborhood talk: “Practice no unfairness in a court decision; you shall neither favor the poor nor show deference to the influential; judge your neighbor with fairness. You must not go around among your people as a gossiper or take your stand against your neighbor’s life. I am the Lord” (Lev. 19:15–16, Berkeley Version). The witness had to be prepared, in a capital offense, to back his testimony by assisting in the execution (Deut. 17:7). The Ninth Commandment prohibited false witness (Exod. 20:16; Deut. 5:20, Lev. 19:20). A perjured witness incurred the same punish­ment as that to which the defendant was liable: “ye shall do to him what he had planned to have done to his brother” (Deut. 19:15–21, Berkeley Version). This was in terms of a major Biblical principle which sentimen­tal humanism ignores “as thou hast done, it shall be done unto thee: thy reward shall return upon thine own head” (Obad. 15; in the Berkeley Version, the latter part reads, “your doings will come back upon your own head”). In Jeremiah 50:29, we see this same principle: “according to all that she hath done, do unto her” (cf. Lam. 1:22).

The emphasis on honest testimony and the necessity for unforced evi­dence, i.e., not forced from the defendant but resting on the moral con­science of witnesses, was basic to the procedures of justice. The goal of justice was defined as God’s order, and the true judgment is thereby the judgment of God: “You must show no partiality in your decisions. You must listen to low and high alike without being afraid in the presence of any man; for judgment belongs to God” (Deut. 1:17, Berkeley Version). God’s curse was upon all violators of their oath.

The establishment of these Biblical laws of justice and of testimony were basic to the American tradition and to the Constitution. The Con­stitution established the independence of the courts from political coer­cion, and of the witnesses from self-incrimination and the rule of terror and torture. We have seen the courts become major political instruments. Now the integrity of the defendant is under attack. If we are persuaded to weaken in any way the protection of the Fifth Amendment, we are being made to dig our own graves and to assist in our own destruction.

Some will immediately object, “But haven’t the Communists made evil use of the Fifth Amendment? Mustn’t we do something to prevent that?” Let us examine a specific case of such use of the Fifth Amendment. A minister was several times identified before a congressional committee as a party member from the 1930s on. He had served as president of a party organization, and he had a long record of prominent membership in a variety of Communist front groups. The testimony on these things was clear-cut and telling, and it would have been impossible for the man to have denied the validity of a massive documentation. What was gained by putting this Communist on the stand? It was obvious, first, that he had no intention of confessing, and second, that he would sit there by the hour, taking the Fifth Amendment as his ground for refusing to testify. It was equally obvious that this man wanted to be on the stand. First, it gave him a national platform from which he could denounce the entire hearing as a “witch hunt”; he thereby took attention away from himself and the testimony against himself and centered it on the House Commit­tee and its “persecution” of him. Second, by pleading the Fifth Amend­ment by the hour, he aroused the hostility of many Americans to that law, thereby contributing to the breakdown of that law. As a result, other is­sues than the testimony against him became the focus of public attention.

The Fifth Amendment is being breached from two directions. First, the Bureau of Internal Revenue requires the taxpayer to produce his records, i.e., to incriminate himself. Thus, a law which broke with the spirit of the Constitution as it was framed is now being used to destroy the citizen’s liberties. Second, members of the criminal syndicate are being promised immunity from prosecution if they will testify against their associates (which would mean incurring death at the hands of their associates), and are being sentenced for contempt for refusing to testify. We cannot be sympathetic with criminals, or defend them, but we must defend godly law and such testimony is only technically not self-incrimination. Such a requirement weakens the force of the Fifth Amendment and paves the way for the return of torture and terror as the instruments of “law,” and this certainly is a Communist goal. The courts are making it harder for law-enforcement agencies to convict criminals legitimately. Are they paving the way for a demand for illegitimate demands and means? Is an­archy and disorder promoted in order to make us cry out for totalitarian force to suppress it? The defenses of the Constitution are being steadily replaced by the offenses of the totalitarian state.

The roots of this waywardness are in the religious apostasy of Ameri­cans. Their conception of law is increasingly humanistic and man-cen­tered rather than Biblical and God-centered. As a result, they have no yardstick, no true standard of measurement, and they are easily misled. Isaiah declared of old, “To the law and to the testimony: if they speak not according to this word, it is because there is no light in them” (Isa. 8:20).